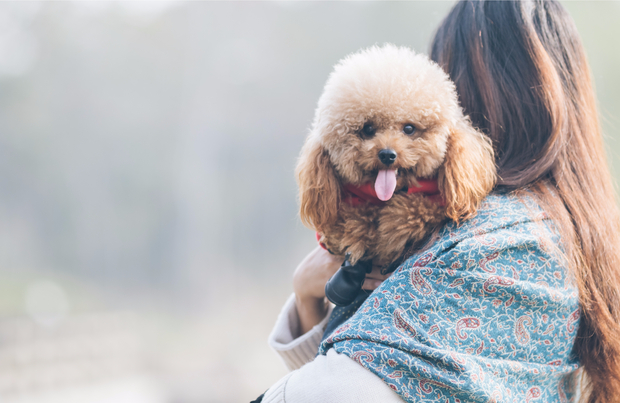 If you think your dog is a pampered pooch, you’re not alone. The ongoing trend of pet humanization contributes to the pampering of our dogs, from grooming to photo shoots. These ten dog breeds seem to be reaping the benefit of pet pampering the most.

Let’s get the oh-so-regal and beautifully coifed Poodle out of the way in the first slot. When watching a dog show on television, the prancing Poodle is almost always a show stopper with her coifed hair, immaculate grooming, and “how did they get her coat so white” luster. These dogs actually excel in dog sports and related activities, but they tend to be best known for their show coat. Their naturally curly hair is quite dense and nearly non-shedding, so the Poodle is a popular family pet.

You know those cute spunky little white dogs you see prancing down the street or strutting their stuff on doggie runways? Perhaps they have bows in their hair and their coat just seems to dance with their movement? Chances are you probably encountered the Shih Tzu, a member of the Toy group. A playful family member and doted upon lapdog, the Shih Tzu must be brushed daily to prevent matting. Many of the pampered dog breeds are not for the beginner pet parent unless he or she has plenty of time and devotion to the breed and his or her requirements.

Near and dear to my heart, this is my breed of choice. Though a bird dog from the Sporting group, Cocker Spaniels need regular attention to grooming by a professional. My dog’s personal groomer, John Jendrzejewski, proprietor of Tails R Wag’n in Wilkes-Barre, Pennsylvania has been grooming for 27 years and has seen his fair share of Cocker Spaniels. “Some dogs come in with long coats like the Cocker and the owners want a specific Cocker cut to keep the integrity of a show dog look without sacrificing a dog that can still play and go for long walks with ease,” he says. The long feathery ears of the Cocker Spaniel, prone to ear infections if not cared for properly, are also a source of pampering (and contention) when visiting the doggie spa.

A member of the Herding group, the Puli’s cords can be brushed out to reveal a wavy coat or kept intact and need only occasional separation for trimming and to prevent tangling. However, the Puli’s coat motion helps to keep the cords separated. The Puli is hardworking breed and though he prefers to have a job to do, with his coat maintained by a diligent owner, this pampered pooch serves as a jack of all doggie trades.

A Bichon Frise-type dog, the Coton de Tulear is a sociable and savvy little pooch who is primarily a white bundle of energy. Unlike other Bichon-type dogs, the Coton is a minimal shedder but still makes the list of our most pampered purebred pooches. Known as the Royal Dog of Madagascar, the Coton is a small, clownish but lighthearted dog requires frequent brushing and daily attention to coat.

This breed makes our top 10 list of pampered pooches because in the many dog circles in which I run, the Chihuahua seems to appear time and again in social circles. From the dog fashion runway to posing for pictures in magazine photo shoots, the Chihuahua has warmed its way into mainstream hearts and pop culture. His pint-sized demeanor with large personality makes him a popular but pampered family pet. Though his coat, aside from the long-haired Chihuahua, requires minimal care, he bonds easily, loves to play, and is a rock star in the canine couture world.

This rock star of the Toy group requires regular attention to coat to keep him looking his best. Pampered Pomeranian seems to have a natural ring to it, and fanciers of the breed will tell you they love the doting given to them. He is a frequent shedder, so brushing is crucial for proper coat care. My dog’s groomer tells me that once upon a time a client came in and insisted her Pomeranian be groomed closely for a summer cut. Jendrzejewski advised otherwise, but ultimately the client demanded the shorter cut. Sadly, the Pom’s coat never grew back properly, as if the roots were “traumatized or shocked” by the grooming tools.

With a nod to dog world guru, David Frei, the Afghan Hound has a thick flowing coat that requires intensive grooming to maintain its consistency. Most fanciers of the breed report that a professional groomer is a must-have for any Afghan owner. His thick and silky coat emits pomp on the outside, but his desire to be your friend to the end is a true sign of this loyal breed.

Another Toy group pooch, the Maltese also exudes pampering. A small dog with a playful and sometimes mischevious personality, he is happy fetching, playing, and enjoying spa time. A beloved pet, many Maltese parents prefer a puppy clip and keep the coat shorter. For those who admire the longer, more traditional Maltese coat, it should be noted that his silky human-like hair is low on the shed-o-meter.

A list on pampered pooches is not complete without mention of the Peke. This confident, charming member of the Toy group has a long double coat that requires daily care. Because he is low to the ground, pet parents of the Peke report the dog picking up brambles, knots, sticks, twigs, and more as they meander around the neighborhood for a walk. The American Kennel Club reports that because of their long undercoats, Pekes need at least an hourly brushing session per week. We raise our grooming brushes to you, pampered pooch parents!

Carol Bryant is the marketing and social media manager. She runs the blog Fidose of Reality.