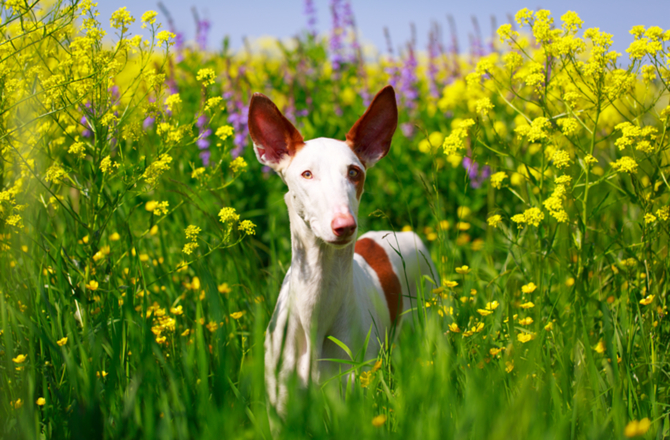 While the origins of our beloved pups may be contested among historians and dog lovers alike, some breeds are can trace their roots from ancient Egypt to the first Americans. We’ve asked Certified Animal Behavior Consultant Steve Dale to share the oldest breeds known to man.

“Not only have these dog breeds been around a long some, some listed in this group have spent far more of their history as nomads rather than living with people,” said Dale, who is also an editor of “Decoding Your Dog,” with Dr. Debra Horwitz and Dr. John Ciribassi, authored by the American College of Veterinary Behaviorists.

Sometimes referred to as the Congo terrier or Zande Dog, the Basenji was developed as a pack hunter and watchdog of native tribes in Africa. Though the breed was prized for its skills in Africa, it’s thought that Egyptian Pharaohs owned the first Basenjis. A clever, independent and somewhat cat-like breed, the Basenji wasn’t successfully introduced to England until the 1930s and made its way to America shortly after. Known also as the “barkless” dog, the Basenji is generally quiet but can occasionally make a howling or shrieking sound.

One of the most rare breeds in the world, the New Guinea Singing Dog is much more closely related to a wild dog than a domesticated pet. Independent and graceful, the breed is most well known for it’s complex voice, which includes a variety of howls, yelps and whines. The New Guinea Singing Dog is rarely seen in the home and is not generally recommended for families. Some say, however, that with proper socialization the breed can tolerate handling.

One of the oldest breeds of domestic dog, some claim that the Pharaoh Hound has been hardly altered in the last 5,000 years. With features similar to the dogs seen across Egyptian and Greek art, the Pharaoh Hound is a medium-sized breed with a long, lean body and a short coat that can been seen in tan or chestnut. An independent, placid breed, Pharaoh Hounds are skilled hunters and were bred to hunt rabbits in Malta, Greece and North Africa.

With deer-like elegance and a long, lean build, the Ibizan Hound may share similar roots with the Pharaoh Hound and resembles the dogs portrayed on tombs in ancient Egypt. Bred for hunting small game, particularly rabbits, the Ibizan Hound was kept in its purest form to retain its sharp sense of smell and hearing. Considered a rare breed by today’s standards, the Ibizan Hound was officially recognized by the American Kennel Club in 1979.

A breed first depicted in ancient pottery around 750 AD, according to the AKC, the Peruvian Inca Orchid were the dogs of the Incan tribes and their descendants, the Quechua. The breed comes in three sizes and can be either hairless or coated with a variety of colors. Loyal, alert and energetic, the Peruvian Inca Orchid dog requires plenty of daily activity to remain healthy and happy, according to the AKC, and requires plenty of socialization from an early age on. Because of its hunting instincts, the breed may not do well with small animals.

Known also as the American Dingo, the rare Carolina Dog may have been closely related to the very first dogs that roamed North America. Based off of ancient art depicting dogs with similar physical traits to the Carolina Dog, some experts believe that the Carolina Dog is a descendant of the breeds that may have crossed the Bering landmass over 8,000 years ago. Because of its origins as a more nomadic breed, the Carolina Dog is quiet, reserved and can be shy around strangers. The breed does bond well with its people, though, and often excels in obedience and agility training.

Also known as the “Mexican hairless dog,” the Xoloitzcuintli (pronounced shoh-loyts-kweent-lee) or Xolo dates back an estimated 3,500 years to the time of the Aztecs. A rare breed that was thought to have become extinct at some point, the Xolo has made a bit of a comeback since the 1950s. A calm, intelligent breed, Xolos are prized as both companion and guard dogs and will respond well to gentle, consistent training. Though the breed is known for its hairlessness, Xolos are born with a light coating of hair and may be suitable for those with allergies as it sheds minimally.

Evidence of the Saluki can be traced to early Egypt, where it was used by nomads to run down foxes, hares and gazelles in the desert. This graceful, swift breed is known for its endurance and strength, which allowed it to hunt in deep sand or rocky terrains. Sensitive and quite, Salukis are gentle towards children but not extremely playful and are dedicated to its family members while remaining slightly aloof. Because of its strong hunting instincts, Salukis will often chase after small animals and love to run swiftly in open spaces.

Also known as the “Russian Wolfhound,” Borzois were bred by Russian aristocracy for the purpose of hunting large game, like wolves, in very cold climates. The first Borzoi was documented in the 1600s and from there, the breed may have established as many as seven different types in Russia. Though the end of the Russian Revolution brought the breeds popularity to a halt, it remains a quiet and good-natured companion in the home. Outside, however, the breed is known for running wild and chasing small animals and requires plenty of activity in a well-fenced space.

With Greyhound-like dogs depicted in Greek, Egyptian and Roman times, this ancient breed also became popular among English nobility and commoners. Known for its ability to run after and catch game at a very quick pace, Greyhounds became valuable for chasing rabbits in the 1800s and then as racing dogs in America in the 1900s. Sensitive, independent and well mannered indoors, Greyhounds are generally calm and well behaved with other pets and dogs it has grown up with.