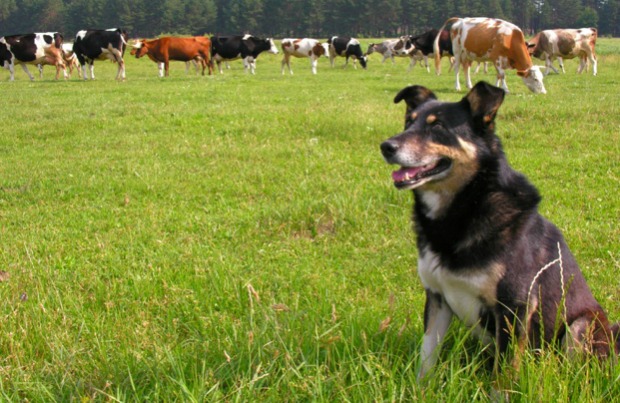 Some pups, like bulldogs, are born to be couch potatoes while others, like labs, thrive on being an active member of the family. But what about working dog breeds — the type of dogs that have been bred for years to do a certain job? What do they look like and how can they be incorporated into life with a family? Here’s a look at 10 different working group breeds, defined by the American Kennel Club, and why they love having a job to do.

This working breed originated in Japan, and has been used as a hunting dog there for decades. Defined by their large, powerful bodies and curly tails, Akitas excel in performance and therapy work. Because of their hunting ancestry, Akitas are generally quiet but have strong guarding instincts and can become quite loud if an intruder enters their home, according to the AKC. They like to act as a pack leader in the home, so a strong hand in obedience training is important. They also require regular, daily exercise.

Recognizable by their long, silky coat, Bernese Mountain Dogs are strong, intelligent and agile, according to the AKC. These traits proved essential in performing the drafting and droving work — or pulling a cart and moving livestock — in the cold, mountainous regions in which they originated. While Bernese Mountain Dogs still do this work, they’re also known for their skills in obedience, agility and herding competitions and make excellent therapy dogs. Their large frame and calm demeanor make them ideal for acting as companions to farmers and driving dairy cattle, according to the AKC. Although they do require consistent training and moderate daily exercise, they are also good family pets.

Originally used for running down and holding large game like wild boar and bison until a hunter arrived, Boxers are intelligent and strong dogs that love being with people. They have also had success as couriers during wartime and as seeing-eye dogs, according to the AKC, and are recognized by their fawn or brindle-colored coat. Boxers crave human affection, and are patient and lively around children. Their short coats need little grooming, but they do require daily exercise to keep from being bored at home.

These strong dogs have been used as watchdogs and companions for more than two thousand years, according to the AKC. Because of their fearlessness and courage, Mastiffs were also used in bull baiting, lion fighting and gladiator fighting in Rome under Julius Caesar. They’re good natured, gentle and loyal, and continue to be used as watchdogs and companions today. They’re good for families but do well in large, suburban areas because of their size, according to the AKC.

Another large working dog, the Great Dane is known for being strong, friendly, and energetic in addition to their exceptional size, according to the AKC. The breed was developed to hunt boar and later was used as a companion and estate guard in Europe. They have gentle and loving dispositions, which make them popular family pets. Because of their background, they have instincts to protect their owners and guard them homes and need adequate space for daily exercise and movement.

Originally used to help locate stranded travelers in mountainous regions during snowstorms and avalanches, this strong breed excels in cart and weight pulling competitions in addition to obedience training. Saint Bernards are powerful and muscular while maintaining a gentle disposition, according to the AKC. Their coats can be long or short, but both require regular grooming. Although they require daily exercise and obedience training to keep their minds and bodies active, Saint Bernards make great family pets and companions to those living in the country or suburbs.

Known for their incredible endurance and working nature, Siberian Huskies were bred in Asia as sled dogs and continue to be used for that purpose today. They’re outgoing and good-natured, making them an excellent breed for everything from therapy work to companionships. They’ll need daily exercise and have a strong predatory nature, making it important to keep an eye on other small pets in the home or the surrounding area, according to the AKC. They have thicker coats than other breeds due to their cool-climate upbringing and require weekly brushing.

This working breed enjoys participating in a variety of tasks, including agility, herding, weight pulling and sledding, according to the AKC. Their weather resistant, white coats are weather resistant and suitable for very cold climates. They were developed in Siberia to herd reindeer, hunt and guard their masters. Because of their passion for working, Samoyeds may be known to chase things, run and bark in a domestic home so they should be exercised daily or given a job to do, according to the AKC.

Recognized by their bristly mustache, whiskers and eyebrows, Standard Schnauzers originated in Germany to guard owners and their livestock, rid farmyard of vermin and protect their owners as they traveled, according to the AKC. They’re naturally protective and especially love children, making them good family pets. Because of their origins as a hunter and guardian, Standard Schnauzers are extremely intelligent and require a strong hand in training alongside daily exercise. Their coats should be stripped, by plucking out loose, dead hair, at least twice a year, according to the AKC.

An elegant, muscular dog bred to be a guardian and companion, Dobermans have great endurance and speed, according to the AKC. Their intelligence and trainability have made them successful police and war dogs as well. They’re fearless and obedient, and have retained their guarding instincts as domestic animals today. They’re affectionate towards their owners and are obedient in training.