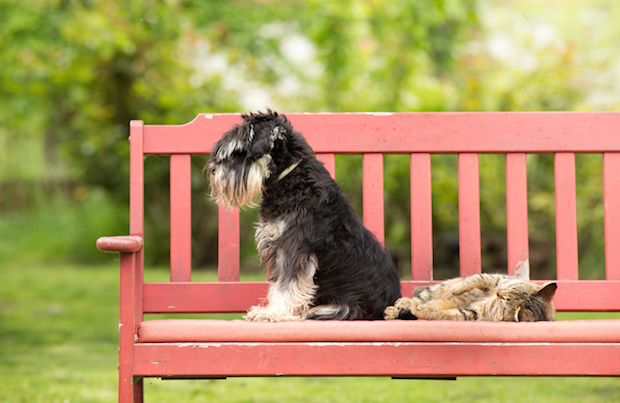 While many dogs and cats can live harmoniously together, there are certain breeds of dog with hunting instincts that may be too strong to handle daily life with a feline friend.

“Typically, sight hounds, which were originally bred to hunt rabbits, are most likely to have trouble with cats because their hunting instincts are triggered by their sense of sight,” said American Kennel Club spokesperson Lisa Peterson. “When small animals move quickly, sight hounds react immediately.”

Here are some breeds that, historically, don’t do well with cats.

Though the Saluki appears to be graceful and fragile, it was bred to be an avid hunter and possesses the strength and endurance to chase quarry over long distances and difficult terrain, Peterson said. Originally used in Egypt to track and take down gazelle, the breed will instinctively run after anything that moves, including cats.

Originally owned by farmers needing help to eradicate vermin and drive foxes from their underground dens, Smooth Fox Terriers are seldom used for hunting today but continue to maintain their drive and determination, Peterson explained. A bright, brave breed, the Smooth Fox Terrier loves games and requires regular exercise to harness its active nature. A protective breed prone to barking at strangers, Smooth Fox Terriers make excellent watchdogs and are not suggested to live in a feline household due to their high prey drive.

Bred to hunt rats and other small vermin, the Manchester Terrier can quickly turn into an efficient working dog in the backyard or field when he detects the presence of a rodent, according to Peterson. A clean, independent and sensitive breed, the Manchester Terrier makes a well-mannered and devoted pet. Active and alert, Manchester Terriers require moderate daily walks or a good off-leash romp in a safe area. Due to this breed’s inquisitive terrier nature it thrives in households without cats.

An extremely active dog bred to be a watchdog and vermin hunter, the Schipperke loves to be involved in what’s going on around it, Peterson shared. Because of their watchdog tendencies, Schipperkes can turn into barkers if not taught otherwise and should be brought to obedience classes at a young age. Adaptable to both city and country living, the Schipperke enthusiastically participates in conformation and agility activities and requires minimal grooming aside from a weekly brushing and occasional bath. The Schipperke does best in a cat-free household due to it’s hunting instincts.

Used for trailing and treeing raccoons and other small animals, Bluetick Coonhounds are known for their ability to stay on even the most intricate of tracks, Peterson said. With droopy ears and a dark blue, mottled coat, Blueticks are hardy, athletic working dogs that excel in hunting, obedience and agility training. A lovable breed that gets along well with other dogs and children; however, they usually do not do well with cats. Blueticks require plenty of exercise and may be stubborn at times, requiring a strong hand in training.

A medium-sized sight hound, Whippets are known for being the fastest domesticated animals of their weight, capable of speeds up to 35 mph, according to Peterson. This breed was developed as a race dog and rabbit courser in England, the instinct to chase anything small and furry, including cats. While they’re natural athletes when racing or coursing, Whippets are quiet and dignified in the home and make excellent house dogs.

Originally used to hunt hare, wolves and even snow leopards, Afghan Hounds have the strength and speed to bring down prey in addition to the stamina needed to maintain a strenuous chase for a sustained period of time, Peterson explained. This dog breed is known to have a strong interest in chasing cats, which is why the Afghan Hound makes the not cat-friendly list.

Covered with thick, silky hair, Afghan Hounds can come in all colors and, in addition to hunting, they make excellent show dogs. While prized by their owners as companion dogs, the Afghan Hound does require regular grooming to maintain its coat and regular daily exercise.

With a graceful appearance and lovable nature, the Bedlington Terrier was developed in England in the 1800’s to hunt a variety of vermin. Known for its curly, woolly coat, the Bedlington has a mild and gentle personality and makes an energetic-but not too rambunctious-playmate for children, according to the AKC Bedlington Terriers tend to be unwelcoming to cats and love to chase other small animals as well.

A high-energy, extremely intelligent breed, Australian Cattle Dogs are ready and willing to work all day, Peterson shared. Their agility, strength and courageousness allow them to easily control and move cattle, even the most stubborn of cows! An exceptional problem solver and popular show breed, Australian Cattle Dogs need a job at home to keep them out of trouble, Peterson also explained.

The Australian Cattle Dog may tolerate cats if raised with them; however; due to their strong prey drive they tend to thrive in a cat-free household.

Originated in Germany to guard the family and livestock and rid farmyards of vermin, Standard Schnauzers are sociable and affectionate, particularly with children. Intelligent but strong willed, Schnauzers require daily exercise and regular obedience training. Due to the Standard Schnauzer’s fearless nature and high prey instinct it shouldn’t live with small pets, including cats.

It’s important to remember that a dog’s ability to get along with cats will depend on the individual dog and extent of its prey drive. Dog owners should use a systematic approach to introducing a cat to its new home to ensure a smooth transition.

Peterson recommends keeping the dog and cat separated from each other for the first few days to let both parties become comfortable with each other’s scents without thrusting them directly into play. After a few days, allow your dog to be in the same room in the cat after they’ve been exercised (and are calm) and provide plenty of positive reinforcements for appropriate behavior as an incentive to get your dog to continue to behave well in the cat’s presence.

“Until the cat and dog are comfortable with each other, supervise their interactions and provide a way for the cat to escape,” Peterson said. “A good example is a chair she can jump on to get to a space the dog can’t reach.”