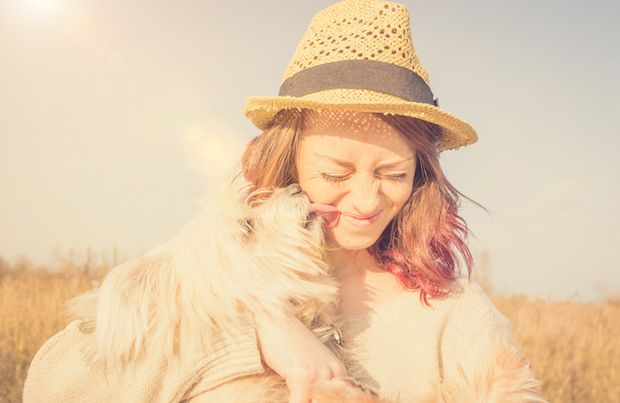 While we’re all convinced that our pups—5 or 75 pounds—make the perfect lap warmers, some breeds are built for human companionship. We’ve asked Wayne Ferguson, president of the Kennel Club of Philadelphia and past president of the American Kennel Club Canine Health Foundation, to share his pint-sized picks for the best lap dogs.

“They’ve all been around for centuries and are bred for only one purpose: to be companions for their humans,” he said. “They’re affectionate, calm, happy, and gentle and, above all, they want to please. Perfect ingredients for a laid-back lap dog.”

A lovable, pleasing breed, Cocker Spaniels enjoy playing games and spending as much time as possible with their families. Commonly seen in buff, liver, white and black and white colors, some also have “freckles” of color on their faces. Because of its propensity for obesity, Cocker Spaniels should get plenty of daily exercise.

Originally owned by wealthy Cuban families in the 18th century, the Havanese is a small, delicate dog that loves being close to its owners. A dog that wants nothing more than its owner’s full attention, the Havanese is generally good with children and other animals and can adapt easily to both city and country living.

A small, delicate breed with a white coat and round, black eyes, the Maltese is playful, confident and loving. A good watchdog due to its propensity to bark at both strangers and other dogs, Maltese are not recommended for families with younger children. Because of their size, Maltese fare well in both the city and the country and require regular grooming to maintain their coats.

Originated in the 18th century as a version of the Standard Poodle, Toy Poodles were primarily bred as companions but were also used as both mushroom hunters and performers. A breed that loves to impress its owners and gets along well with both children and animals, Toy Poodles love learning new tricks in addition to warming its owner’s lap. The breed can, however, be skittish around new people and requires plenty of socialization from a young age.

One of the most ancient dog breeds kept by Chinese royalty as pets and lap warmers, Shih Tzu’s are most recognizable by their long, straight coats. A playful breed that loves learning, Shih Tzu’s are among the most lovable among toy breeds and are good with young children and other dogs. Because of their short muzzles, the breed is more susceptible to having respiratory issues and may snort or sneeze frequently.

A small, cuddly breed known for their puffy white coat, Bichon Frises are both friendly and loving, capable of getting along with people and other dogs. Bichon Frises love to play games and can easily adapt to life in the country or city. Discovered by Italian seafarers in the 1300s, the breed was brought back to Europe and quickly became a favorite lap dog among Italian nobles.

Originating in 17th century France, the Papillon was bred with the exclusive purpose of being companions dogs for European royalty. A small, delicate dog, Papillons are known for their large, erect ears with hair that grows out rather than down. Intelligent, friendly and affectionate, the Papillon loves to be in the company of its owner and wants nothing but its family’s attention. Though Papillons are a calm, laid-back breed, they do require daily exercise and regular grooming, specifically in and around their ears.

One of the first breeds established in the United States, the Boston Terrier is a small, compact dog with erect ears and a big smile. Gentle and amiable, Boston Terriers get along well with others and make excellent companions and family pets. Easy-to-train and keep, Boston terriers fare well in both the city or the country and require minimal grooming and exercise.