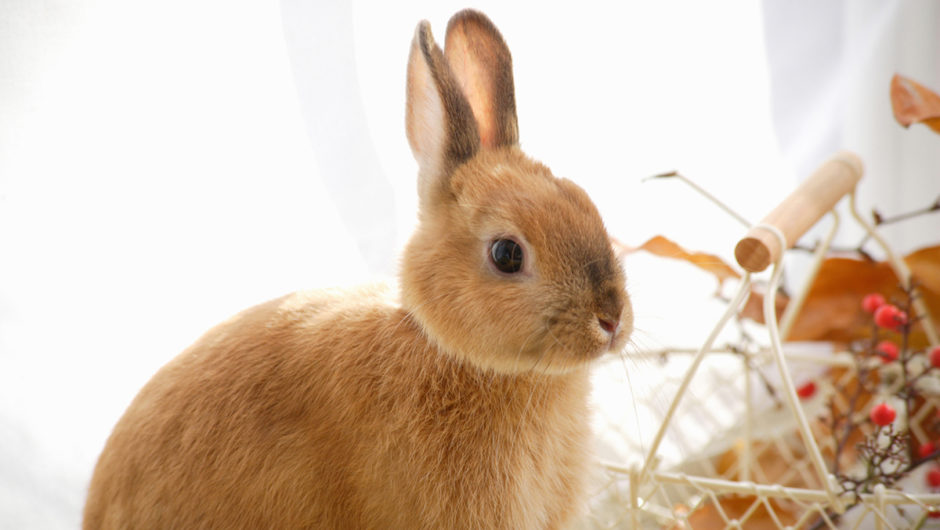 Who doesn’t look forward to fall? The cool, crisp days and nights, the trees sporting brilliant red, orange and yellow hues, the houses decked out in all their spooky, Halloween glory. Add on football, apple- and pumpkin-picking (and pies), and Thanksgiving, and there’s no wonder autumn is such a popular season.

It’s the Greek word for blue and the birthstone for September. It’s also a beautiful female rabbit name.

The ancient Greeks and Romans thought this precious yellow gem had the power to protect and heal. But we think November’s birthstone is a name that’s perfect for a bunny of either gender.

October’s birthstone is known as the queen of the gems because of its multicolored hues. You can’t go wrong bestowing it on your female rabbit.

In the language of flowers, dahlias are a symbol of elegance. And what’s more elegant than a rabbit named Dahlia daintily nibbling on her food?

These flowers are associated with the month of September and symbolize wisdom and bravery. Who doesn’t want a pet with those fabulous qualities?

You can find heather still blooming in early fall. The flower symbolizes good luck, and Scottish brides carry white sprigs of it in their bouquets for just that reason.

These flowers are associated with November (and Mexico’s Day of the Dead, but don’t tell your bunny that). You can also split up the moniker and name your rabbit Mari or Goldie.

These brightly colored beauties signify joy and beauty. In China, where these flowers originated, they symbolize long life.

No wonder rabbits love it—this hardy herb helps digestion and grows through the fall. In medieval times, herbalists used it to remove bad or bitter emotions. (If you do feed parsley to your rabbit named Parsley, make sure you do so in moderation.)

It’s one of the herbs used for stuffing a Thanksgiving turkey, but for the ancient Celts it symbolized strength and wisdom.

This hardy herb symbolized love and courage in medieval times.

Fall’s favorite fruit was the name Gwyneth Paltrow gave to her first-born. Your bunny will be happy with it, too!

Nothing says autumn more than pumpkin, the staple of Halloween decorations and doorways nationwide. So it’s tailor-made for your rabbit, as a name or nickname.

Originally from Japan, this tomato-shaped fruit is available in supermarkets during the fall, making it the ideal autumn fruit-inspired name for your new pet.

This fall fruit tastes best when baked or stewed. The Greeks associated it with Aphrodite, the goddess of love, but who says you can’t use the name for your boy bunny, too?

The colorful varieties of maize (aka corn) are seen on doorways and table settings during Halloween and Thanksgiving. You can name your rabbit Maize or Maisy.

Rabbit Names Based on Fall-Inspired Colors

Not only does the word ruby call to mind the vibrant color of fall leaves, but it’s also the name Rosemary Wells gave to the big-sister bunny in her “Max and Ruby” kids’ book series.

If Ruby seems too dull for your female bunny, how about Scarlet, another color that’s reminiscent of fall leaves?

After the leaves have lost their brilliant hues, they turn various shades of brown and tan, which is why caramel works so well as an autumn-inspired rabbit name. Besides, who doesn’t want to be reminded of caramel-coated apples, another fall treat?

Several football players have sported the first name Rusty, but it’s also a name that calls to mind the color of certain apples, like Winesaps.

Ash trees turn yellow in the fall, and that’s a great reason to name your furball after this magnificent tree.

The Black Tupelo has the most spectacular fall foliage, according to the Arbor Day Foundation, with leaves that turn red, orange, yellow and even purple.

Clusters of these trees stretch from the Midwest to Alaska and throughout the West, making them the most widespread tree in North America, according to the National Forest Association. Their claim to fame in the fall is that they turn a gorgeous shade of yellow.

The hazelnut is harvested in October, and it’s the basis for all sorts of sweet treats, including pralines, chocolate truffles and Nutella (which, come to think of it, is also a dandy name for a fur baby).

Hickory nuts ripen in the fall, and it’s not hard to find them littering the floor of the forest if you go for a hike. They’re a favorite of squirrels, but you should never feed your bunny nuts!

An 11th-century priest from Cologne, Bruno has become a patron saint of Germany and celebrates his saint’s day on October 6.

The goddess of fruit trees and orchards in ancient Rome, Pomona’s name came from the Latin word pomum, meaning fruit—which is also the origin of the French word for apple (pomme).

In Greek mythology, Demeter was the goddess of harvest and grains. Luckily, you can name your male rabbit Demeter and no one will ever guess it’s a girl’s name, too.

Halloween is one of the highlights of the season. So, what better way to commemorate the holiday than naming your bunny after the sweets that all trick-or-treaters (and their parents) crave?

Of course, you could christen your new pet Autumn, a favorite with hippies and hipsters. But if you find it tough to pick just one name out of these fall-inspired monikers, maybe it’s time to get another rabbit—or two.