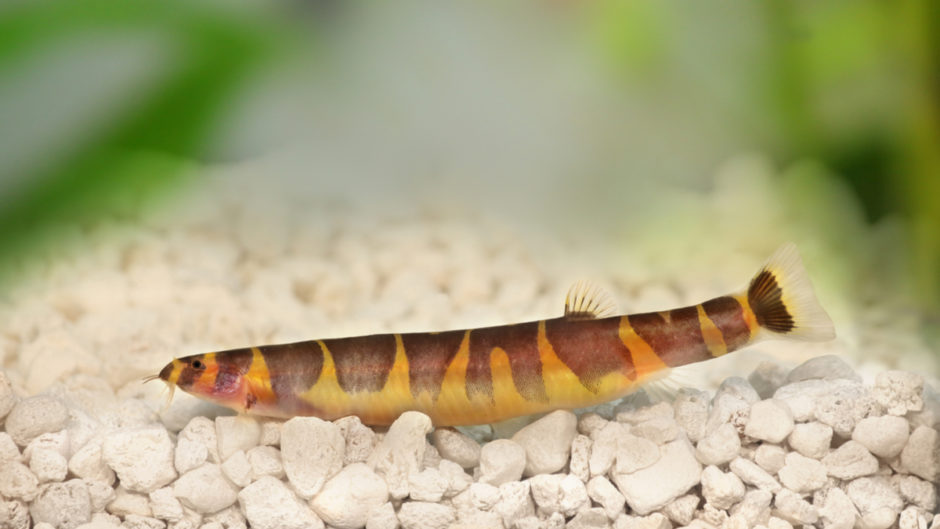 Many hobbyists have a kuhli loach (Pangio kuhlii) or two in their fish aquariums. The long, almost snake-like body, and combination of orange-yellow and black bands make kuhlis an interesting addition to any community tank. Their peaceful disposition, coupled with their ability to wiggle into every nook and cranny in search of food, make them an excellent choice. However, many hobbyists complain that they rarely see their pets.

Kuhli loaches are social animals and need a large group to really feel safe enough to venture out in daylight. They often hide when there aren’t at least a couple of “bolt holes” (caves or other places where they can hide and feel secure if the need arises). It sounds like just the opposite of what you would think, but the more hiding places you provide, the more secure they are, and the less they actually hide. Provided with these two basic needs, kuhlis will be out and about nearly all day long, scouring every surface in the tank for every morsel of missed fish food and chasing each other throughout the tank.

They are happiest when kept in groups of a dozen or more. After some initial squabbling, they’ll establish a pecking order and settle down. Once order is established, there might be some scraps for prime feeding areas, but no real harm is done. All of them will call the same small cave “home.” It’s almost like watching a troop of circus clowns pile out of their car as the group moves out of their cave in search of fish food. They just keep coming!

Kuhli loaches will reach about 4 inches at maturity. They have a black nose, a black band through the eye and a series of 10 black bands down their flanks, finishing out with another black band through the tail. The base body color behind those bands is a cream to yellow/orange color. Out of the spawning season, it is difficult to distinguish sexes, though adult females are a bit stockier. In spawning season, adult females are very easy to spot – in addition to their obviously larger size, you can see the green eggs through their flanks. A female full of eggs is nearly twice as thick as a male.

Pangio kuhlii is the most commonly encountered member of their genus. There are several other members of the genus that are imported from time to time, but as far as I know, only P. kuhlii is spawned with anything approaching regularity. Many of their cousins have similar color patterns, so if you are trying to build a group for breeding, it is often best to purchase them all from the same source at the same time.

All members of the genus Pangio are opportunistic feeders. They will eat just about any meaty food. They love frozen foods of all types, and will eagerly hunt down pellets and flakes. One of the best fish foods for them–and one of the ideal fish foods to get them into spawning condition–are worms. They’ll take black worms, white worms, young red worms, Grindal worms and even micro-worms. They also enjoy an occasional meal of frozen bloodworms. Given these fish foods regularly, you’ll have a group of healthy and happy kuhli loaches.

Kuhli loaches don’t reach sexual maturity until they are at least 12 to 18 months old. Some sources even say they have to be over 2 years old before they are ready to breed for the first time. They spawn as pairs, but it’s best to get a group of adults, and let them pair off and select their own mate.

A simple setup will do well for both regular day-to-day maintenance and spawning. A 10-gallon to 20-gallon long tank is perfect for a group of six to 12 adult kuhlis. To make maintenance easy, I suggest leaving the bottom bare of gravel, and painting the outside flat black. This will make cleaning the tank much easier and also make it easier to catch the adults if you need to move them to another tank. A sponge fish tank filter will provide adequate filtration and will eventually be covered with the kind of microscopic aquatic life that will make an excellent first fish food for the fry. Add a couple of clay flowerpot saucers, each with a notch about a half-inch in diameter knocked into the side that will serve as perfect hideaways for them.

Also add a large clump of Java moss, preferably suspended an inch or so off the bottom. An easy way to do this would be to attach it to a piece of “egg crate” grid (sold for drop ceiling lighting fixtures at home centers) about 6 by 10 inches. Set it on top of the flower pot saucers to hold it off the bottom. You can also add a couple of pieces of Java fern. Attach them to the “egg crate,” too. Finally, add some water sprite floating at the surface, but keep it thinned so that it doesn’t get too large or cover much more than about a third of the surface. Set up the tank where it will get some indirect light but no direct sunlight. Run the light for 8 hours or so a day.

Water quality seems to be more important than maintaining exact water parameters. Do your water changes regularly, and rinse out the filter regularly, too. A pH of 6.8 to 7.2 should be fine. As long as the water isn’t too hard, you should have no problems. If you have really hard water, consider filtering it over peat for a few days before using it in the breeding tank. Don’t keep the tank perfectly clean. A small accumulation of mulm on the bottom is beneficial to the fry’s first few days.

As time goes by, you’ll notice that the females are starting to fill with eggs. When a couple of females are bulging, do a larger-than-normal water change the day before a large weather system moves through. You’ll notice the fish are swimming nervously up and down the sides of the tank, as well as all over the tank. In the dim early light, pairs begin to swim up and down together. Eventually, they’ll twine around each other and splash along the surface of the tank.

After a few false starts, bright green eggs will be released and fertilized while they are moving along the surface. The eggs will float for a bit, then slowly sink. They are slightly adhesive and will attach to the leaves and roots of the water sprite. Those that don’t will fall into the Java moss and Java fern. Any eggs that reach the bottom will be eaten by the adults. At this time, either remove the plants to another tank to hatch out, or remove the adults and let the eggs hatch in the spawning tank. I prefer to move the adults.

The eggs will hatch after a couple of days, and the fry will start feeding a few days later. The mulm on the bottom of the tank will be full of all kinds of protozoa that will provide an excellent first food for the fry. They will also eat much of the micro-fauna found on the Java moss and Java ferns, and the sponge filter. Add supplemental fish foods, such as specially made commercial fry foods that sink to the bottom. After four or five days, you can start adding frozen cyclops and micro-worms. After another week, you can start adding newly hatched brine shrimp, too.

Do small daily water changes to help keep the water quality at an optimal level. The fry grow fast and will be nearly an inch long after six weeks. At this size, it’s a good idea to move some of them to another tank for further growing, as a good-sized spawn can number several hundred fry.

Breeding the kuhli loach is a challenge that requires work and patience. It’s not something that hobbyists can do without really putting their minds to it. Kuhli loaches are always in demand. Once they reach about 2 inches, they are of salable size.

Often, you can trade with other hobbyists in your local fish club. Provided that you maintain a good relationship with the owner of your local fish store, he or she should be happy to take the extra babies off your hands in exchange for fish food or supplies. A few might even buy them outright, but don’t expect to get rich. Be happy if you can cover fish food costs, and enjoy your hobby. At the very least, you’ll be able to brag to your “fishy” friends that you met the challenge!