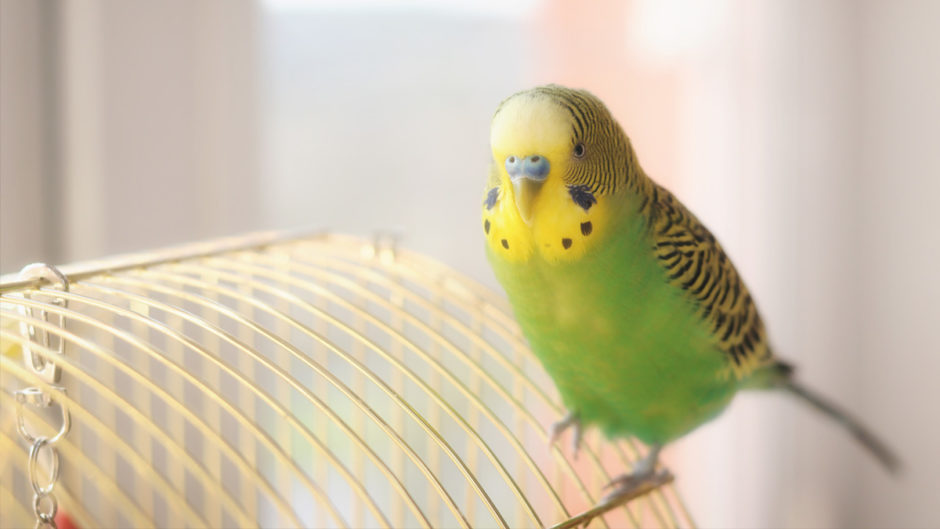 My Golden Retriever and Pomeranian like to eat the droppings of my cockatiel and budgies (parakeets). Should I be really concerned, and is there any way to deter my dogs from eating the droppings? I usually keep the door closed, but the dogs always sneak in.

I don’t recall addressing this question before. Considering that most dogs seem to really enjoy “grazing” around and under bird cages, we really should talk about the potential problems with this habit.

Fortunately bird droppings are, for the most part, harmless to dogs. The types of bacteria found in the fecal matter of healthy birds are generally considered harmless to canines. Abnormal bacteria in bird droppings (usually in the group Enterobacteriaceae), are usually considered normal bacteria in the canine gastrointestinal tract. That is, if the bacteria ingested in the bird droppings even makes it through the very acidic stomach to set up shop in the intestinal tract. The acidity of the stomach would most likely kill most pathogens that a dog would ingest.

I have two Chinese-Cresteds that also like to go “debris hunting” under the bird cages. Mine mostly eat discarded pellets. I am convinced that birds believe there is an unlimited food supply, so they just happily hurl food from the bowls, hoping for a more succulent morsel that must be on the bottom of the dish. I also believe birds are amused that they can provide tidbits to other house pets, giving them some degree of “control” over them. Never mind that they also call them by name or order them to “sit” or “stay” and call them “bad dog.”

There are several organisms that could pose a potential danger, should they be inhaled, and not ingested. The primitive organism that causes psittacosis, Chlamydophila avium, can cause disease in pot-bellied pigs, house cats, humans and rarely canines, although unlikely.

The organism that causes tuberculosis, Mycobacterium sp., could definitely be infective to dogs or other house pets, but again, the bird would have to be infected with tuberculosis to be able to pass it to other species.

The fungus, Aspergillus, is ubiquitous in the environment and would commonly be found in wet, dirty cage bottoms. If a pet stirs up the detritus in the bottom of the cage, and inhales many spores, it can result in nasal or respiratory aspergillosis.

The good news is that most viruses are species-specific, meaning that they inhabit a narrow range of hosts. So, even if your bird was harboring polyomavirus or even West Nile virus (which we are beginning to see in birds exposed to mosquitoes), droppings would not be infective to your dogs.

When it comes to parasites such as worms (tapeworms, roundworms), many are also species-specific, and others require an intermediate host. So parasitic eggs, if passed, should not be directly infective to dogs.

Protozoal parasites, such as Giardia, may or may not be infective to other species. At this time, it is thought that the avian form of Giardia is not infective for mammals, although it is suspected that the mammalian form can infect both dogs and humans, although more work needs to be done on the infectivity and transmission of the different species of Giardia when it comes to the different species of mammals.

The Salmonella bacterium could be passed in droppings from an infected bird and can cause disease in other species if ingested (not inhaled).

To prevent your four-legged pets from grazing around the bird cages:

Under The Cage “Cleanup”

Some pets tend to graze, or “hoover” under bird cages, consuming not just droppings, but seeds, pellets, other discarded foods, husks and bedding. I have had questions about bearded dragons eating seeds from under the cage, rabbits consuming bird pellets and dogs eating just about anything that falls out of the cage.

Some cage debris, such as seed hulls and bedding, is not digestible, and if ingested in large volumes, might result in an impaction somewhere in the gastrointestinal tract, although this is unlikely. Some cage offal might cause an upset stomach if it doesn’t agree with the pet. The amount of calories consumed should not be important when it comes to the total calories consumed in a day, but for those who are watching their pet? weight, calories are still calories.

Some dogs seem to seek out and relish cat feces. I presume that is because the end products of cat food digestion contain enough yummy proteins to entice many dogs. I often thought that if I could make a monthly heartworm preventative for dogs that tasted like cat feces, that I would make a few million dollars and retire! Oh, well, I just shared my big idea with all my readers. If you end up running with my idea and get rich, will you please remember my sanctuary for endangered animals? Well, that? my scoop on the poop. I hope it helps!

Excerpt from BIRD TALK Magazine, July 2005, with permission from its publisher, Lumina Media.