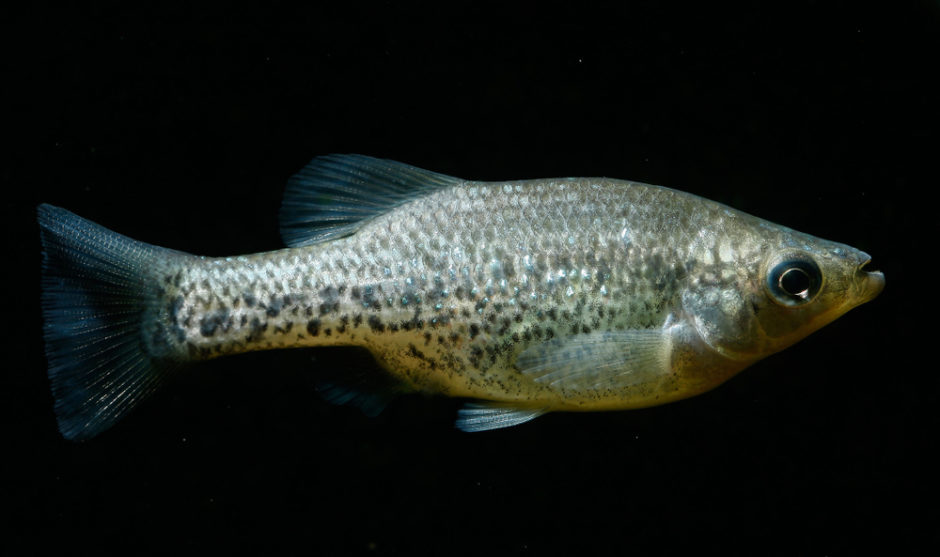 In the freshwater fish aquarium, algae are rarely more than an irritant, but they sometimes reveal underlying problems that may need fixing before a more serious aquarium water quality problem develops.

Diatoms are brown-colored algae with siliceous cell walls that are are very tolerant of low light levels. Aquariums with serious diatom problems are most likely not receiving enough light for good plant growth.

Known as hair, beard and brush algae, these are different members of the red algae group, despite their usually dirty green color. Red algae tend to appear first on the edges of plant leaves but can also be found on solid objects, such as bogwood.

Green algae needs bright light and is more common in brightly lit aquariums than in gloomy ones. Arguably a sign of good environmental conditions, green algae is rarely a pest because so many freshwater fish and invertebrates happily eat it. Occasionally, a planktonic green algae bloom turns the water green; this is more common in fish ponds than aquariums and is known as “green water.”

Technically these are bacteria known as cyanobacteria. They appreciate still, nutrient-rich water and are consequently most common in overstocked freshwater aquariums with inadequate circulation and insufficient water changes. Blue-green algae aren’t eaten by most tropical fish, but some do, such as Ameca splendens. Some of the Nerite snails eat blue-green algae too. Really, there is only one way to combat blue-green algae: remove the conditions it likes. Stop direct sunlight, ensure good water movement and reduce nitrate/phosphate concentration.

Algae use nutrients from the water including nitrate and phosphate as fertilizer. Blue-green algae in particular are characteristic of aquariums with poor water quality, while diatoms thrive in new aquaria where water quality varies. Optimizing aquarium water quality is an important part of preventing algae problems.

Controlling the lights’ illumination period in an aquarium is important. Aquatic plants do best with a regular 10- to 12-hour lighting period. Any lighting beyond this point will favor the algae. Aquatic plants do just as well if the lighting is broken into two five- to six-hour periods with a two-hour “siesta” in between, but for some reason, algae do not. Try putting your aquarium lights on a timer switch to see if that reduces algae problems in a planted aquarium.

A variety of topical fish, snails and shrimp are sold as algae-eaters for the freshwater aquarium. Most of these freshwater fish and invertebrates only eat green algae, ignoring blue-green algae completely and having a marginal effect at best on red algae and diatoms.

They key thing to remember with algae-eaters is that they add to the biological load of the aquarium. More tropical fish mean more nitrate and phosphate, which in turn will speed up the growth of algae. So, while algae-eating animals may be part of an overall algae control strategy, by themselves they are not the magic cure.

Some fast-growing plants produce chemicals that suppress the growth of algae. The details are still unclear, but planted aquariums with healthy, fast-growing plants tend not to have major algae problems. The most common algae in such freshwater tanks are green algae, and these are easily managed by adding some small algae-eating fish or invertebrates, such as Crossocheilus siamensis, nerite snails or Amano shrimp.

Among the plants known to have allelopathic effect are Cabomba, Egeria, Ceratopteris, Hygrophila and Vallisneria. Under good conditions, these aquatic plants grow very rapidly – in many cases requiring weekly pruning. Note that slow-growing aquatic plants, such as Anubias, Cryptocoryne, Java fern and Java moss, have no allelopathic effect. Indeed these plants are likely to be smothered by algae under unfavorable conditions.

Commercial algicides are very effective but must be used with caution. As the algae decays, water quality declines and oxygen is consumed. Antibiotics such as erythromycin are equally effective against blue-green algae but can cause the same problems if used injudiciously.

The main argument against these algae-killing chemicals is that if the factors that caused the algae problem are not identified and fixed first, the algae will be back in a few weeks, anyway.

Ultraviolet sterilizers are used primarily for dealing with aquarium green water; they have little to no effect on the kinds of algae that grow on the glass, substrate or plants. They are mainly used on ponds.

Arguably the best way to manage algae in most aquariums is simply to mechanically remove the worst and accept the rest as part of the scenery. A good algae sponge will help keep the front glass clean, but take care to use sponges designed for acrylic aquariums if you have an acrylic aquarium. Also be aware that sponges can trap small grains of sand and may end up scratching glass aquariums.

There are many types of algae scrapers on the market that offer a variety of distinctive features. All work well and are more dependent on how often they’re used than how they’re put together. For best results, wipe the glass weekly; this prevents the more tenacious types of algae from getting established in the first place.