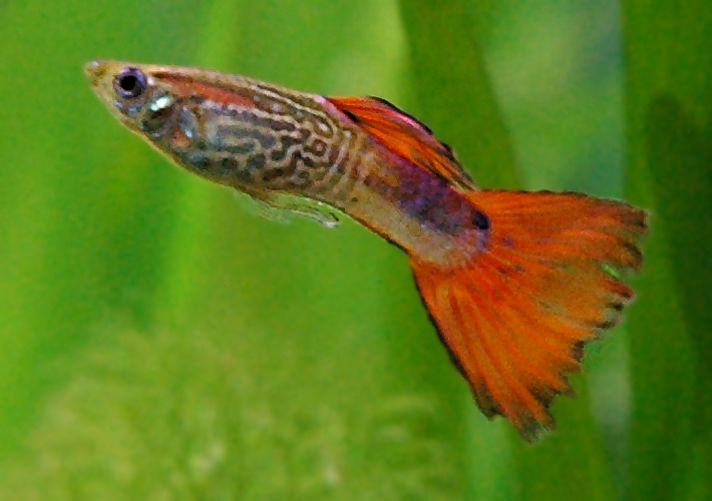 Like fin rot, fungus usually occurs when aquarium fish have been damaged or stressed by poor environmental conditions.

Mouth fungus (sometimes called columnaris) infections in aquarium fish are frequently confused with true fungal infections, but compared with fungal hyphae, the mouth fungus filaments are distinctly off-white to gray in color. Mouth fungus is caused by the bacterium Flavobacterium columnare and needs to be treated with an appropriate antibacterial or antibiotic medication.

The fungi involved include species of Achylia and Saprolegia, often referred to collectively as water molds. These are likely present in most aquaria, breaking down organic material, such as feces, leaf litter and uneaten fish food.

Fungus spores are opportunistic and given the chance will invade most types of organic material, including living tissue. Fungus do not harm healthy aquarium fish because the mucus layer on the skin of a fish prevents the spores from infecting its living tissues.

However, if the fish’s mucus layer is damaged, fungus can quickly develop, particularly if the fish is living in dirty or otherwise unhealthy conditions. Rough handling is a common cause of fungus, but other common causes include fin nipping and fighting among fish. Any diseases that produce open wounds, such as ich, ulcers and hole-in-the-head disease, can lead to fungus.

Fungus is also associated with environmental stress, presumably because fish exhibit a weaker immune response when they are not properly taken care of. Chilling, poor water quality and inappropriate water chemistry are all common reasons why aquarium fish develop fungus. Keeping brackish water fish in freshwater conditions can also lead to fungal infections.

Fungus needs to be treated promptly because it spreads rapidly, making the fish more vulnerable to secondary infections, such as fin rot. Even by itself, fungus will kill a fish if not remedied.

There are various proprietary medications available for treating fungus, usually based on organic dyes, such as malachite green. These medications are safe when used to treat most community fish, but they cannot be used in tanks containing certain delicate species, such as mormyrids and stingrays, and they are also toxic to snails, shrimps and other invertebrates.

Because fungus is not contagious, infected fish can be moved to a quarantine tank for treatment away from other livestock. This is the recommended approach for systems where some of the livestock are intolerant of antifungal medications.

Tea-tree oil is sometimes promoted as a less toxic anti-fungal medication. While it can work up to a point, tea-tree oil medication is inconsistent in effectiveness and may not be strong enough to treat severe fungal infections. Tea-tree oil is best considered as a preventative or precautionary measure — something to be used in situations where the fish are not yet sick, but they could be physically damaged because of fin nipping, fighting or handling.

Salt is not a reliable anti-fungal medication at the doses suitable for use with most community fish, though raising the salinity will help keep fungal infections at bay in tanks with livebearers and brackish fish. Even so, this therapeutic effect should be viewed within the context of providing these fish with better environmental conditions, in particular their needs for a basic pH, moderate to high levels of hardness and a level of salinity appropriate to the species in question.

Fungus, fin rot and mouth fungus are all opportunistic infections that can occur when fish are stressed or injured. In some situations, fish may contract more than one of these diseases, and distinguishing between them is often difficult.

Fortunately for the aquarist, there are numerous medications available that will treat all three maladies equally well. Combinations of formalin and malachite green are particularly popular and will treat a range of fungal and bacterial pathogens, but as stated earlier, such medications can be harmful to certain types of livestock, so they should always be used with care.

The aquarist should also keep the fish aquarium as clean as possible, in part by providing good filtration and regular water changes but also by excluding things like gravel that might trap organic detritus, so that fungus cannot become established.

Fungus is easily prevented. Avoiding injuries to your fish is essential, and this means minimizing handling and taking care not to mix specimens that might damage one another. Water quality should be monitored carefully, with particular regard to specific needs of livebearers and brackish species.

Cleanliness is an essential part of aquarium maintenance, and removing organic matter from the tank, particularly uneaten food and dead animals, is critical. Sifting the substrate gently to remove organic matter during weekly water changes is also important. The cleaner the aquarium, the less problematic fungus is likely to be.