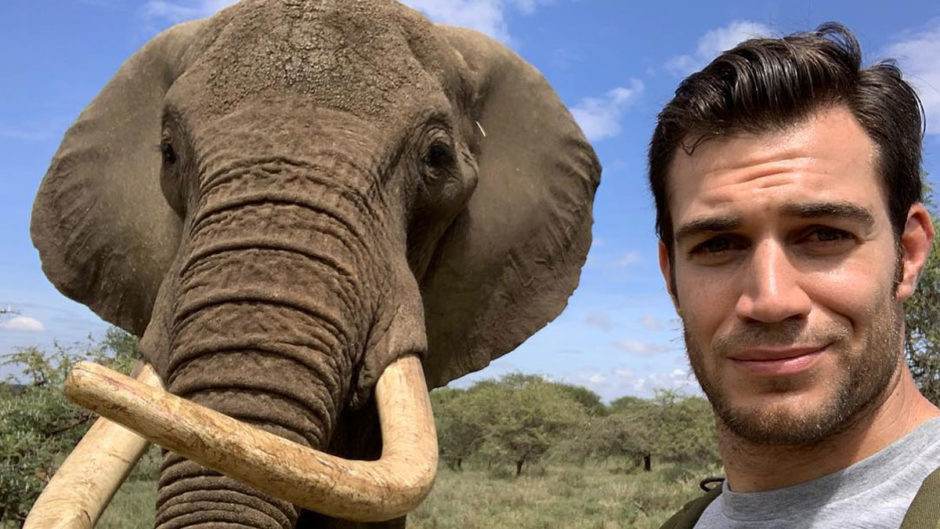 Evan Antin, DVM, has been an animal lover for as long as he can remember. So, it was only natural that he settled on a career as a veterinarian.

“I always knew that animals would be a big part of my life,” says Dr. Evan Antin, TV personality and exotic animal veterinarian at Conejo Valley Veterinary Hospital in Thousand Oaks, California.

Kitten selfies are the best selfies. Courtesy of @dr.evanantin/Instagram

Throughout his years on the job, Dr. Antin has traveled the globe working with all kinds of exotic animals. He often posts selfies with his latest furry, feathery and scaly patients on his Instagram page, which has garnered him a crew of 1.1 million loyal followers, as well as the title of “Sexiest Veterinarian Alive” by People Magazine AND his own Animal Planet show, “Evan Goes Wild.” The animal-lover welcomes the attention, seeing it as an opportunity to introduce the world to a variety of unique species, educate pet parents on proper pet care and help spread the word about animal conservation.

Chewy caught up with Dr. Antin to discuss his preventative pet care essentials and most wild on-the-job moments, and to learn about his personal animal clan, which includes a toe-biting turtle!

What do you love most about getting to do what you do for a living?

My favorite part is just getting the opportunity to have these interactions with all these different species around the world. These are all animals that, since I was a kid, I wanted to see or spend time with or play with on some level. Well, some of these animals you can’t really play with, like when I’m working with a big Jaguar, she can eat my face, but getting to interact and work on these animals and just be with them and have some sort of interaction with them, I live for it. I absolutely love it.

Have you always been an animal lover?

I’ve always been an animal lover. They’ve always been a huge part of my life. I grew up in Kansas, [and] we had a creek in our backyard. My earliest memories are of me every day going and flipping rocks, looking for insects and frogs and snakes and turtles and wildlife and crawdads and just being in nature and loving it.

Dr. Evan Antin hanging in the wild with an Asian Bear Cat. Courtesy of @dr.evanantin/Instagram

I’m pretty much that same person today, but now I have the ability to fly around the world and see all my other favorite exotic animals. But when I’m out there in the jungle, I’m doing the same thing; I’m flipping rocks and hiking through creeks and looking for wildlife.

When did you know that you wanted to do this for a living?

Dr. Evan Antin posing with one of his adorable patients. Courtesy of @dr.evanantin/Instagram

It wasn’t until college that it really came together. Growing up, I gained more of an appreciation for medicine and surgery and thought it was really interesting. I started taking science courses and just fell in love with learning, and it became really obvious that this was my career path. This is where I belong and where I want to strive forward. I worked my butt off to get to that goal, and I haven’t looked back. I’ve absolutely loved being a vet ever since I graduated.

What are some of your most exciting adventures on the job?

One of the most exciting moments was when I was working on a jaguar, and this jaguar had to get a couple doses of sedation. She was a 7-year-old female [and] was extremely strong and dangerous. There was no way to even get near her without sedating her. She was very aggressive. I had to give her a little bit of an extra dose to top her off, and even then, she was still waking up while I was working on her. That got pretty scary because her eyes were opening, her mouth was moving a little bit and her paw moved. I was like, “Oh sh-t! We have to wrap this up immediately.” Luckily, she didn’t wake up more, but when you sedate an animal, some of them wake up faster than others.

[Another time, ] I was once in Nepal, and I had to give this Asiatic elephant medication. She was so stubborn about her meds. I had to give her the equivalent of a pill pocket, which was basically the size of a Chipotle burrito. She was losing weight and not eating as much because she had some GI parasites, so I had to deworm her and kill the parasites. Oh man, it took like 15 minutes of me just trying to shove this elephant pill-pocket burrito sandwich in her mouth. It was pretty funny. My producers got a kick out of it.

What kind of animals do you have as pets?

I have a little dog, Henry. He’s a Chihuahua/Fox Terrier mix if I had to guess. He’s a rescue. I also have a rescue cat named Willy and another cat [named Blue] that we rescued from an addict … [Plus,] I have a tortoise and a snake and some fish.

What is life like with your little clan over there?

The tortoise tries to eat everything! She thinks my toe is a carrot. I have to be careful walking around her. If I don’t pay attention to her, she’ll walk up to me and start taking bites out of my toes, which hurts.

Then [I] have the dog and the two cats, [who have] huge personalities. They love to play, though Blue is not as cuddly as the other two.

Willy’s like one of those super social cuddly cats. I’m flying home from New York to LA today, and when I get home, this cat is literally just going to be screaming at me and walking in front of anywhere that I’m going. He does this thing where he flops on the ground dramatically and meows and then looks at me and just waits for me to pet him. It’s pretty adorable, and I can’t help myself; I’ll just pick him up and cuddle him for a while.

Henry is a total cuddle bug, too. He’s like a little parasite. He sticks to my side wherever I go. He sleeps with me, and he loves it. They’re a sweet little crew.

As a veterinarian, do you have any pet care tips for our readers?

Preventative medicine is such an important part of having a pet, and it’s a really effective way to help reduce and eliminate problematic diseases and issues. Things that apply to the world of preventative medicine would be something as simple as keeping up with vaccinations. More people than you would think don’t vaccinate their pet. And it’s really unfortunate because that’s the most effective way to prevent them from getting some of the scariest diseases they can get, for instance, parvovirus.

Parvovirus is extremely contagious, and it’s a really scary disease. Without really aggressive treatment, a lot of dogs don’t make it, and it takes a lot of time to give them the supportive care that they need. It can take days to weeks.

Distemper is [another] one of the scariest viruses in the dog world. This virus is extremely contagious and extremely deadly. Most dogs that get distemper don’t make it—even when they’re getting the best possible care. I’m so thankful there are these vaccines that can help prevent that.

[Since] vaccines are not always 100 percent effective, I always recommend keeping your environment clean. This goes for new pet owners, and this is something that’s important at shelters, too. I’m partnering with Clorox; they make a really effective product. Take their regular bleach, use a half-cup of that, and dilute it in three-quarters of a cup of water. Now you have a product that can kill parvo. You want to keep this separate from the animals. You’re not cleaning your animals with this; you’re just cleaning their space and whatnot with it.

What parts of a pet’s environment should pet parents be cleaning?

I’d definitely give dog toys, bowls and carriers a periodic clean. You can use a much less concentrated formula [than the one above] to simply clean off the bacteria that accumulate on a pet’s toys and their bowls … There are antibacterial pet wipes and all kinds of stuff available to help with this. But you can also use [2 teaspoons of] regular bleach and a gallon of water. It’s super effective at eradicating a lot of bacteria.

As a vet, I see cats and dogs come in, and their parents don’t clean their food bowls; their food bowls have oil and debris from their food, and it’s been in there for so long. So, they get acne and dermatitis along their muzzle on their face. You can really reduce that simply by giving their food bowls and toys and whatnot a nice clean.

Any news on a second season of your Animal Planet show, “Evan Goes Wild”?

We’ve all got our fingers crossed. We won’t know for sure until they look at the numbers for season one for the next couple of weeks and analyze all that. But the network is really excited about the show, and I love working with them.

I feel really good about what [the show] is and the things that we’re getting across in the show [to educate] people about animals, in general, [and] raise awareness for wildlife conservation, what wildlife rescue is all about, what the medicine is about and just getting people excited about these animals. Many of them are species they’ve probably never heard of. They’re getting to share that with me, and I think it’s really valuable!