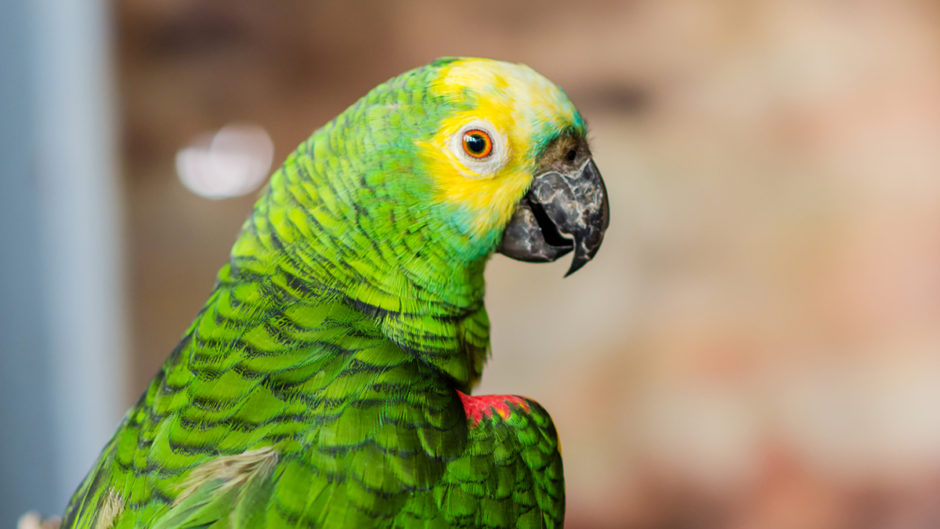 Amazon parrots are attractive, playful, intelligent birds that are as capable of talking as they are as throwing temper tantrums.

“Amazon parrots can be fun and interactive, and if you reward and stimulate that behavior, you can help maintain it,” says Byron J.S. de la Navarre, DVM at the Animal House of Chicago.
They can also be unpredictable and will bite or squawk loudly if they feel threatened or stimulated, he says.

But with proper training and acquainting yourself with some common Amazon parriot behaviors, and misbehaviors, you and your bird can have a happy, loving relationship.

Nippiness can be a problem, but it’s a matter of people modifying their behavior rather than expecting the bird to change,” explains Diana Holloway, president of the Amazona Society. “You do have to be a match for an Amazon — you need to be an outgoing person, as they can overwhelm you.”

And their bites can hurt.

“They know the pressure they need to apply to communicate if they don’t like something or if they’re angry,” de la Navarre says. “They can lightly grab your finger with their beaks without breaking the skin and they can use that same beak to crush a Brazil nut.”

Some Amazon parrot species are nippier than others. Lilac-crowned Amazons have a reputation for their gentle nature, and may have to be really pushed to bite.

“The only time Captain, my lilac crown, will try to bite me is when he doesn’t want to be picked up, or when my macaw is out, because he hates the macaw,” says bird enthusiast Sherri Gleason of California.

One important aspect of Amazon parrot behavior involves the way they may change upon reaching sexual maturity. Amazon parrots can become much more aggressive in a breeding cycle than many other large parrots.

“The males especially, when mature, can become untrustworthy,” says Wayne Davey, a former Canadian World Parrot Trust director and a senior keeper at the Niagara Falls Aviary. “One of the rules about Amazons (as with all large parrots) is never keep them close to your head. I know one lady who always kept her hand-fed Amazon close to her face. One day it bit her really badly, and she needed stitches and plastic surgery. Needless to say, she didn’t want the bird anymore.”

On the other hand, some Amazon parrots may pass through breeding season with barely a ripple. “People hear about [hormonal aggression], and people write about it, but it does not always happen,” said Holloway. “But once in a while, you’ll get a bird with very high testosterone.”

To avoid undesirable situations, be aware of the potential aggressiveness as well as how you behave toward your pet. People often unwittingly stimulate a bird while petting it. There are times you may need to ease up on the affection, particularly strokes on your bird’s back, under its wings or around its tail area.

Said Davey, “At certain times of the year, with male Amazons, you may not want to handle them as much, as they can get aggressive. Females can also get that way, but it tends to be worse with males.”

While you may want to reduce handling your bird or change how you handle it during a breeding phase, leaving your bird cage-bound all day is not an option. Like most large parrots, Amazon parrots require at least four hours a day out of their cages. Some cages, like the YML Open Top Parrot Cage with Stand, have open-air perches that provide them with a safe space outside their cage.

During a breeding cycle, you may need to handle your bird with a stick or towel. “It’s crucial that people stick train or towel train their birds so they can still handle them in difficult circumstances,” says Sussanne Hardy, an animal health technician and bird behavior consultant at Vancouver’s Night Owl Bird Hospital.

Most Amazon parrots respond favorably to stepping up onto a wooden dowel. Those that don’t may step up onto your hand wrapped in a thick towel to protect your arm from bites.

Diet modifications can also help. Limiting starches and sugars during the breeding cycle is a good idea. Feeding a bird too much corn or too many grapes during a hormonal cycle can increase its hormones tenfold. Amazon parrots also have a tendency to be more aggressive toward other species than their own when in a breeding cycle, something to consider if you keep other species of birds.

Another Amazon parrot behavior concern is noise; they can be very raucous, particularly in the morning or evening. In the wild, they usually participate in loud squawking sessions at those times, and this behavior is often evident in captivity.

For this reason, Amazon parrots are not good choices for those who live in apartments or close living quarters where their constant chatter can irritate neighbors — or even other family members, for that matter.

“Amazons can get really loud,” de la Navarre says. “They wake up and go to bed chattering. They squawk if they get spooked, when they’re stimulated or when they want your attention.”
While it may be tempting, de la Navarre does not advise screaming or raising your voice as an attempt to quiet your Amazon as he may take it as a positive response.

As rain forest animals, regular bathing is very important for healthy Amazon parrots, particularly if you live in a dry climate or in a colder area where heaters run all winter.
“They thrive on being bathed,” said Holloway.

Many Amazon parrot owners take their birds right into the showers with them. Others use a spray bottle to regularly mist their birds.

“Bathing is just something Amazons do and it’s good for their feathers,” de la Navarre says. “Some owners make it a fun, interactive activity by placing perches in their showers.”

“Amazons tend to be playful and just like with dogs or other pets, if you interact with them and entertain them, they’ll respond,” says de la Navarre.

Different bird species will behave differently even if brought up the same way, in the same home. “Max, my Mealy, is very laid-back and easygoing,” said Anna Teets, a Calgary bird enthusiast and president of the Alberta city’s parrot club. “My two orange wings, Bailey and Reese, are very playful, and Elmo, my female red lore is fairly shy but very cuddly.” While Amazon parrots often develop closer bonds with one chosen person in the family over others, that doesn’t mean they are cut off from others in the human-avian flock. “Even if you don’t seem to be the favorite person of an Amazon, you can still have a great relationship with that bird, it will just be different,” said Hardy.

The family takes the place of its wild flock, so involve your Amazon parrot in family activities. That includes meals, TV-watching, celebrations and games.