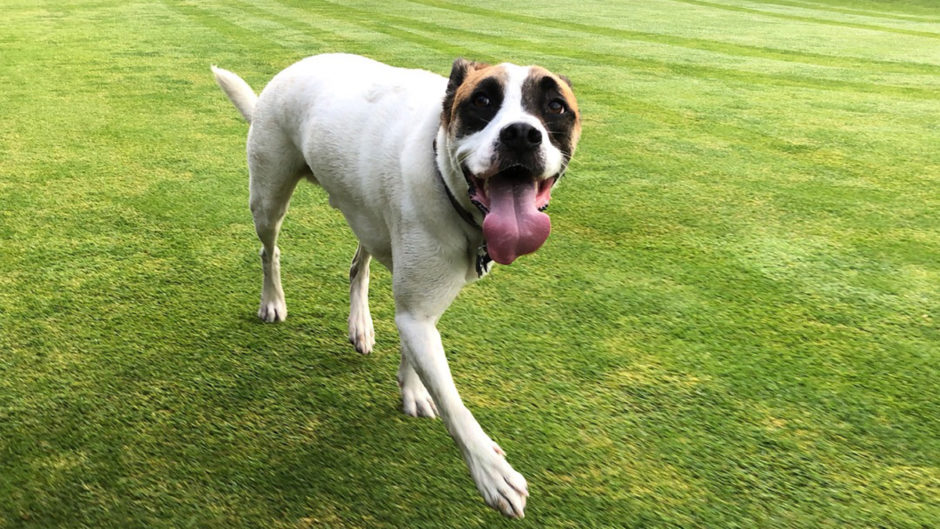 At 1 year old, Bauer was found struggling to walk on a rural road in Mississippi. The young dog, who appeared to be suffering from some sort of hip or leg issue, was taken to a high kill shelter in the area. Luckily, he crossed paths with a big-hearted woman who helped him find a forever home.

Through the love of his new family, and six months of therapy, Bauer is a new dog. He’s even got a new hobby: chasing birds at a golf course.

From the Street to the Shelter

In the fall of 2014, Bauer was found on the side of the road in Mississippi. The exact location where he was found and how he wound up on the road are unknown. It’s suspected that he was abandoned because he had difficulty walking, caused by hip dysplasia, a genetic condition.

Bauer was picked up by animal control and taken to a high kill shelter in the area. Shortly thereafter, he was relocated to Save-a-Dog animal shelter located in Sudbury, Massachusetts. Save-a-Dog is a nonprofit organization that rescues and rehomes abandoned dogs, especially those from rural communities in the South who have a high chance of being euthanized due to overcrowded shelters. It was at Save-a-Dog’s shelter where Bauer met a woman who would change his life.

Sandi Barrett was working as a volunteer at Save-a-Dog when she first saw Bauer.

“He was so sad and lonely,” Barrett says. “Because of his hip issues [which made running and playing difficult for him], the shelter had him separate from the other dogs.”

Bauer also didn’t have the socialization skills that most dogs have because of his hip dysplasia. The painful condition prevented him from playing with people and dogs, according to Barrett. This caused Bauer to be timid at times.

“Any loud voice would send him scurrying into the corner spinning into a tight ball,” she says.

However, Barrett soon discovered Bauer was a fun-loving dog, despite his genetic condition and his timid nature.

“He was such a goofy guy,” she says. “When I took him outside, he was so wiggly—he was like a Gumby dog.”

The Right Pup at the Right Time

Barrett quickly fell in love with the wiggly Boxer/St. Bernard mix and thought he would be a good fit for her daughter’s family. Her daughter and son-in-law just so happened to be looking to adopt a Boxer who could get along with their 3-year-old rescue Border Collie/Aussie Shepherd mix, Kiah.

“I expected he would get along with their Aussie Shephard, who can be a little bossy!” Barrett says. “I just had a feeling he would be great for them.”

During a supervised meet and greet, Bauer was his loving, wiggly and goofy self. Kiah, on the other hand, was aloof and disinterested. Barrett says that is because she is a princess and rules all the pets.

As for the other family members, “My son-in-law was smitten immediately, [but] my daughter needed some convincing,” Barrett says. “They knew he came with a big commitment.”

Taking on Bauer meant a long process of physical therapy and dog training to get him to a place where he could live a healthy and happy life. Ultimately, they decided Bauer was well worth adopting and committed to putting in the work he needed.

The Road to Recovery

By the time Barrett and her family met Bauer, Save-a-Dog already was working with a local vet to set up a femoral head ostectomy surgery (FHO) for Bauer’s more damaged hip. An FHO entails removing the head and neck of a leg bone to allow pain-free mobility. They planned to operate on his other hip after he recovered from the first surgery.

“The [physical therapy] lasted for about six months and Save-a-Dog donors contributed to part of the payments,” Barrett says.

Luckily, Bauer showed signs of improvement. In fact, he did so well after physical therapy that the vets decided he didn’t need surgery on the other hip after all.

After his recovery, Bauer underwent socialization training that included exposure to new experiences and people and learning basic cues. This all was designed to give Bauer more confidence, so he could be well adjusted and comfortable at home.

Fast forward four and a half years, and today Bauer is a playful pup with tons of energy.

Barret’s son-in-law is a gold course superintendent, and he’s able to bring his dogs to work.

“He runs alongside the golf cart, chases the geese off the course and is ready to chase away any non-human visitor—including the occasional skunk,” Barrett says. “No one would think by looking at him that he was ever such a mess.”

And while Bauer is not a shy dog anymore, he’s still not fond of strange things that go bump in the night—or the day, for that matter.

“Every time he goes swimming—he doesn’t actually swim; he just walks around in the water—he gets easily spooked if something touches his leg or paw,” Barrett says. “His ears shoot back, and he sprints out of the water and runs all over the place like a maniac!”

Bauer might love chasing wildlife that flies away when he approaches, but he’s less brave when it comes to animals who won’t run off.

“One day he encountered a turtle in the driveway, and [Bauer] ran back to the house,” Barrett says. “He wouldn’t leave the house until the turtle was gone—for such a big, scary dog, he is a pussy cat!”