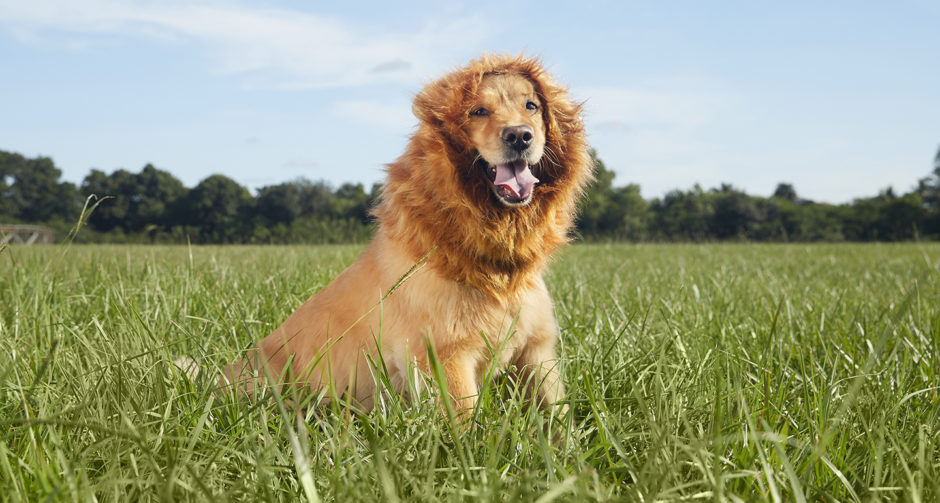 Much to his chagrin, I dress up my pup in cute dog Halloween costumes and adorable clothes all the time. He doesn’t love it. But if he knew how cute he looked in said outfits, I think he’d enjoy the process a bit more. However, until I can train him to look in the mirror and do a sassy twirl, I make sure to reward him with a treat and a smooch after each dress-up session.

I mean, look at this beautiful ham in his Christmas sweater. 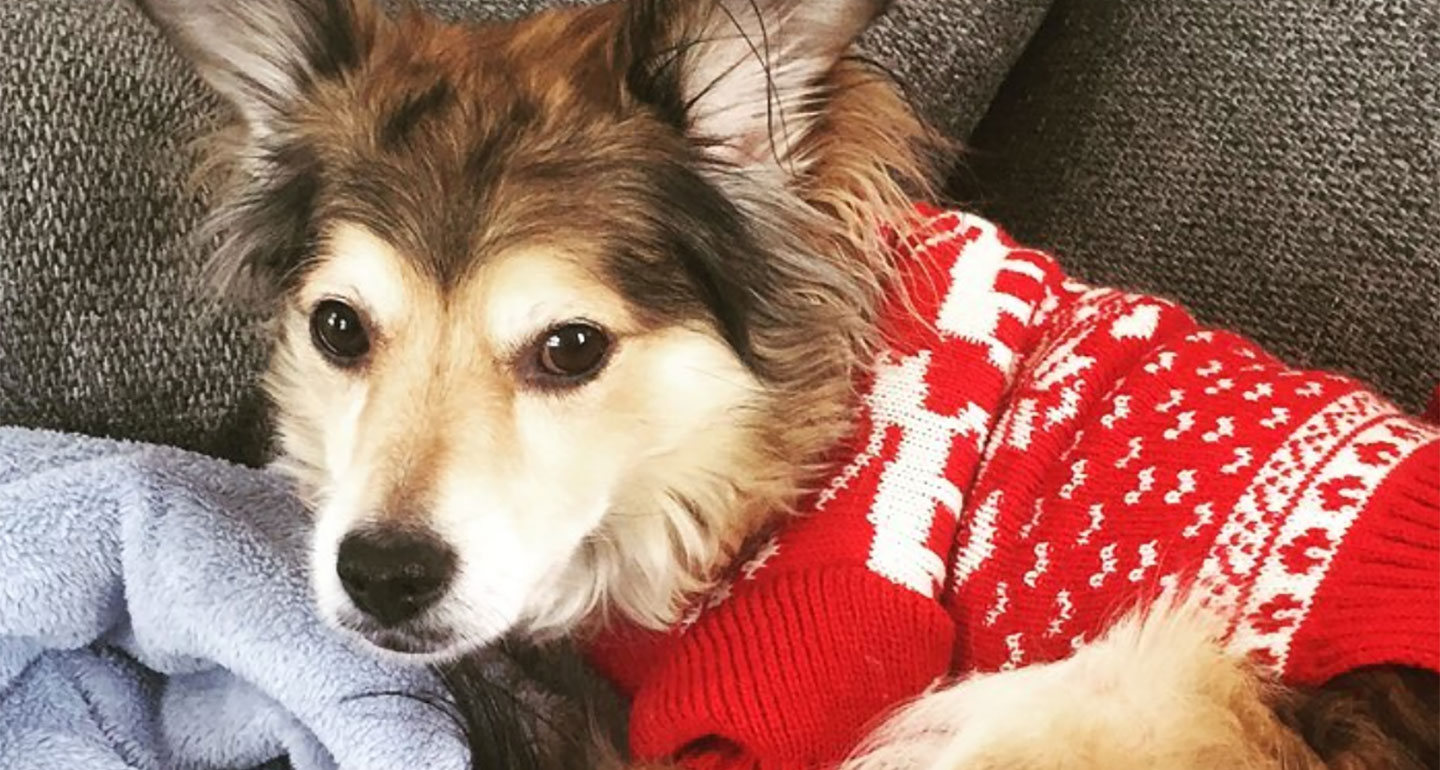 So, when Halloween approaches, it should come as no surprise that I’m all about costumes for myself and my fur child. Sometimes we wear matching costumes, but most of the time I go with something goth, and my Spaniel mix, Sully, dons something that’s equal parts delightful and ridiculous.

But how do you make an already cute pup level up on the cuteness? By going with an animal-kingdom inspired costume for your favorite furry friend, of course! This year, I’ll be dressing Sully in a lion mane costume (more on this below!), because with his floofy tail and tan fur, he’ll truly look like a regal king. Here are 10 animal-kingdom inspired dog Halloween costumes that are sure to win all the costume contests. 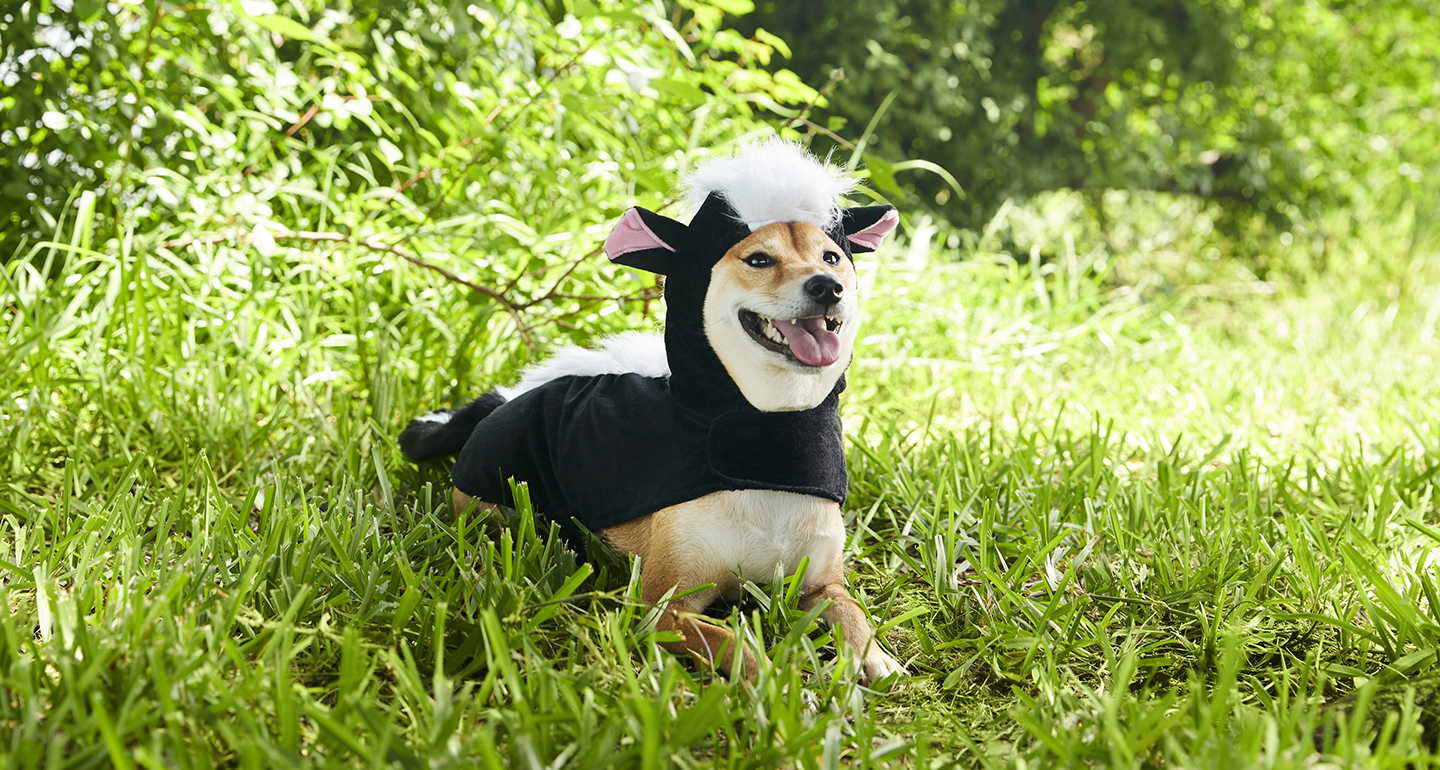 This dog skunk costume from Frisco will turn all the heads, mainly because it’ll make your pup look like a skunk, and everyone will want to steer clear. If you’re an introvert, this certainly will minimize the small talk with other humans!

The design of this costume is utterly brilliant. The top includes a hoodie with elastic trim to help it stay in place on your pupper’s head. The built-in leash/harness hole enables you to safely parade your little stinker around town.

Pet parents rave about this costume. One pet parent says that “as a last-minute costume, I couldn't have asked for anything more.” 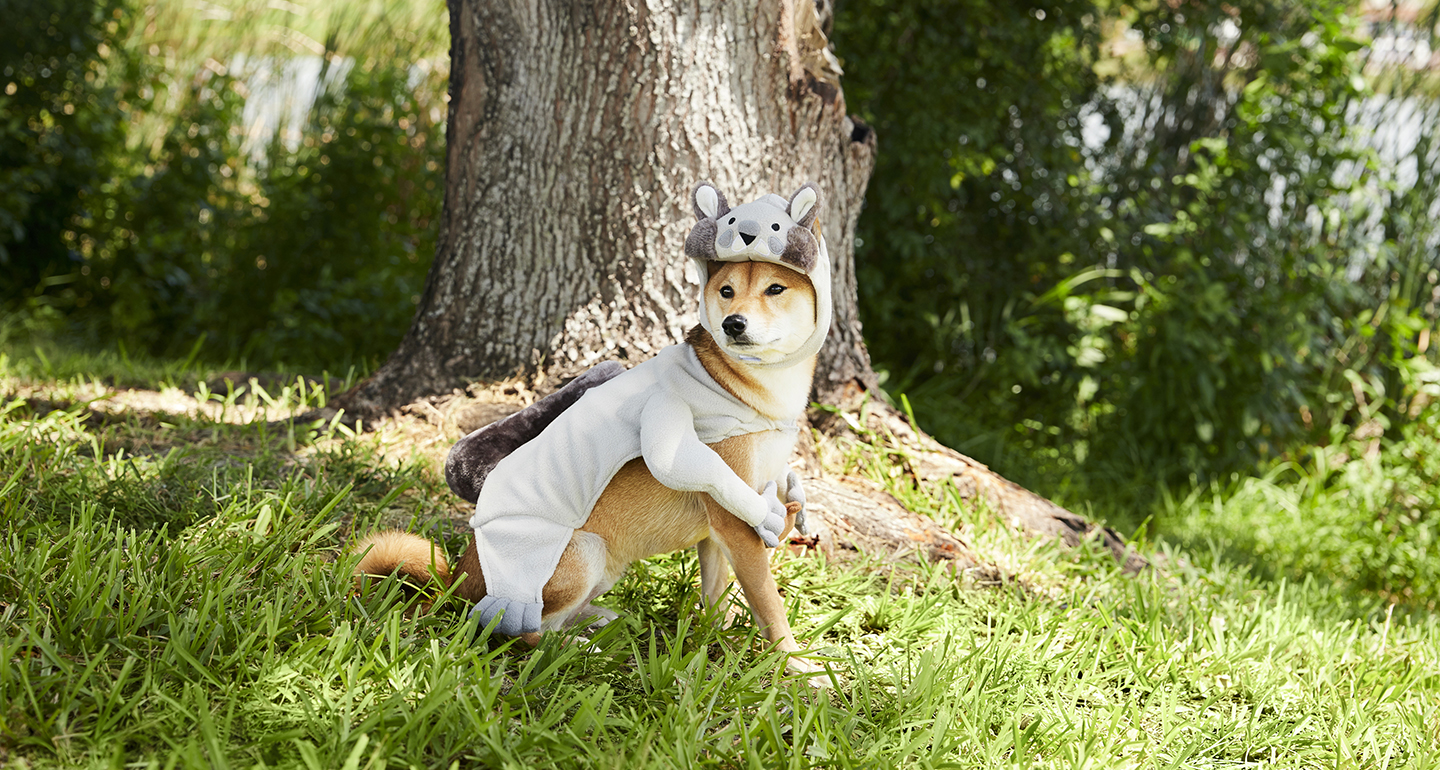 Is it a little nutty to dress your dog up as the very thing he dreams of chasing? Sure, but that’s part of what makes this dog squirrel costume from Rubie's Costume Company so hilarious. The two-piece dog costume has a fleece bodysuit complete with a bushy tail and a separate headpiece.

The bodysuit actually features two tiny squirrel paws holding a nut, which may cause a moment of hilarious confusion when your pooch looks down and wonders, “Wait, whose paws are those? Are they my paws? How did I get two new paws? Can I eat that nut?” 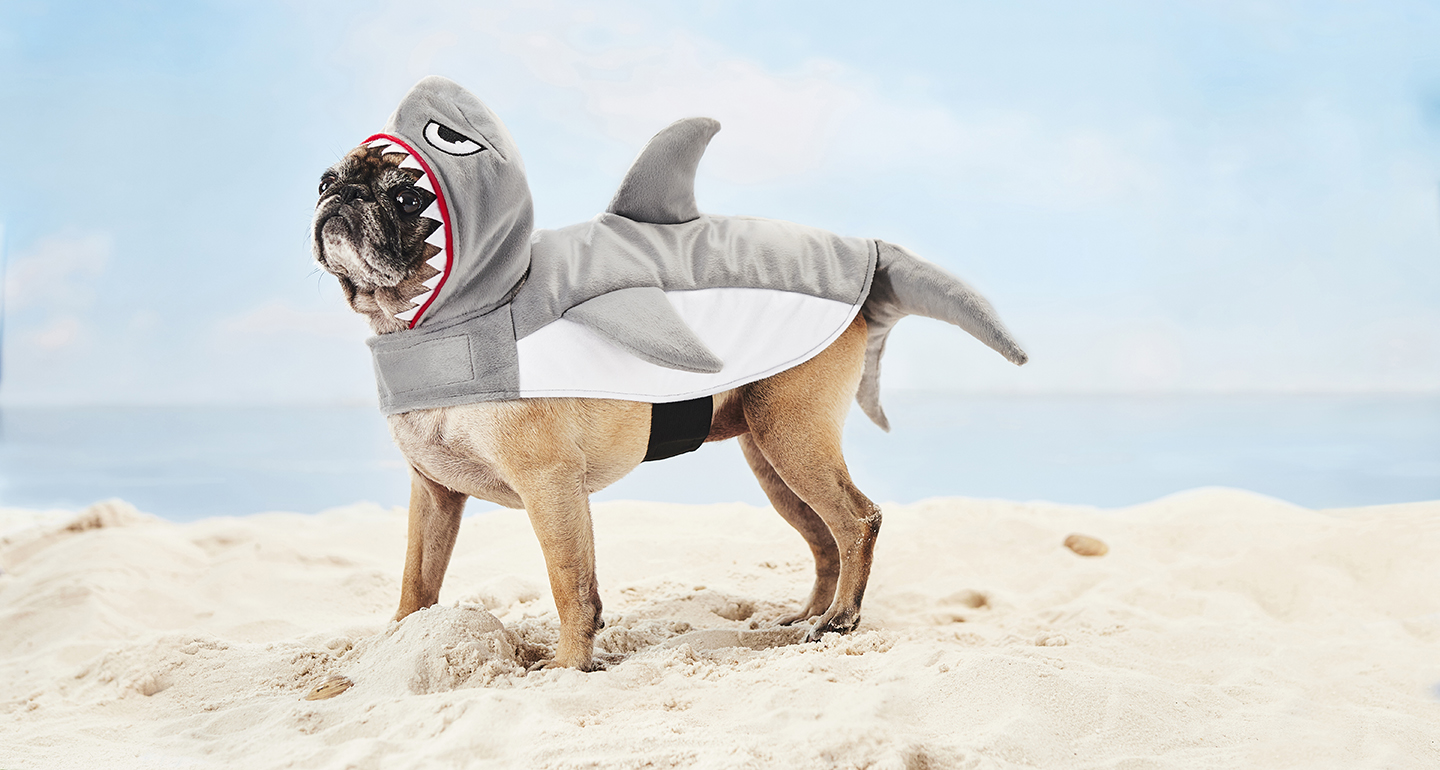 If your dog is anything like mine, then the soundtrack to “Jaws” plays in your head at bedtime. You know, that time when your canine companion is under the covers, digging at the mattress and slinking through the sheets near your feet as you ready your toes for a pup love nip.

This Great White Shark dog costume from Frisco only solidifies your dog’s status as a misunderstood, yet terrifying beast. The one-piece bodysuit connects under your pet’s belly, and the headpiece goes over your dog’s face, making it look like he is coming right out of the shark’s mouth. 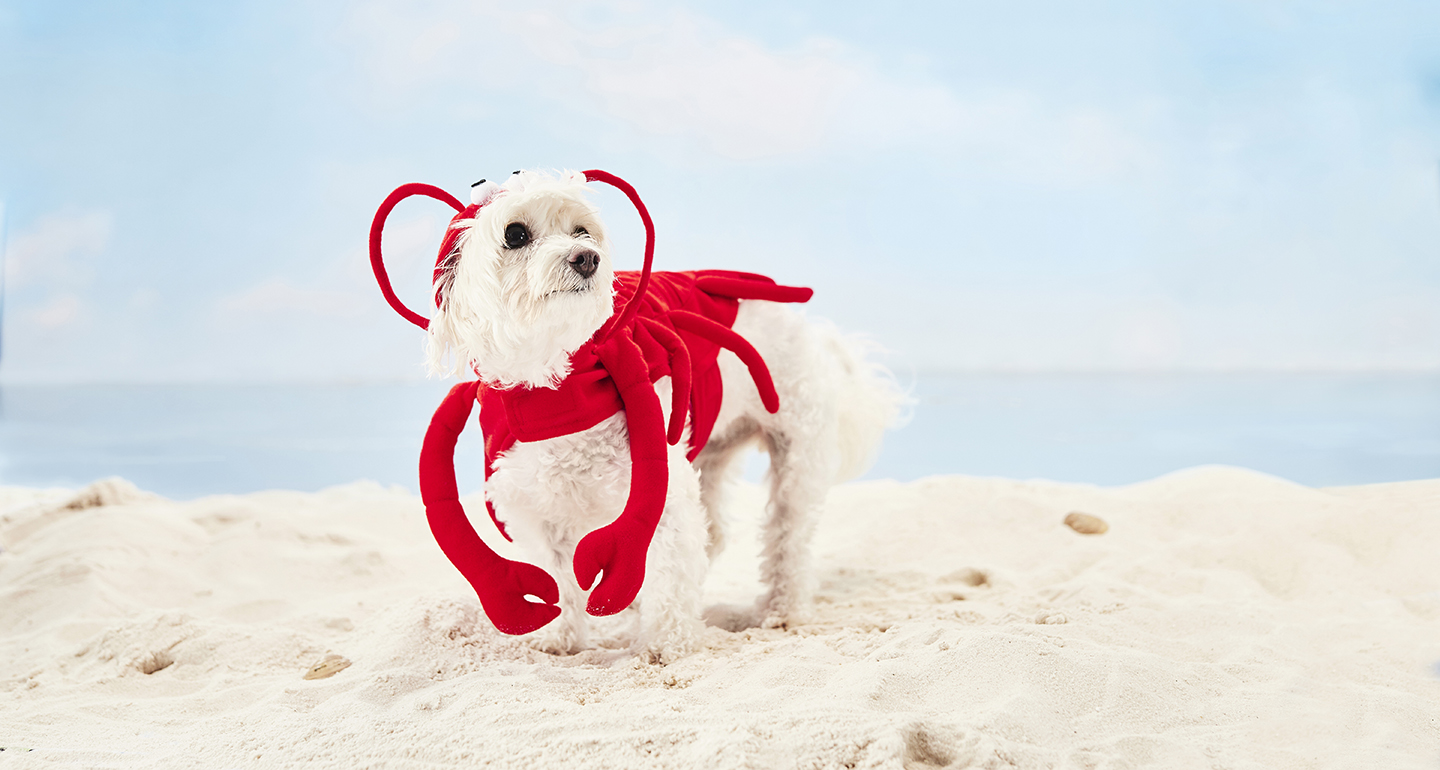 If you’re looking to dress your doggo as another under-the-sea creature, look no further than Frisco's dog lobster costume. This bright red costume comes in one piece with plush lobster claws and googly eyes on top of the head.

If trick-or-treating is on your Halloween agenda, this dog lobster costume is a prime pick. As one Chewy customer says, “The material was awesome and stayed together for the night!” So, your pup should be comfortable as he goes door-to-door on a quest for dog treats. 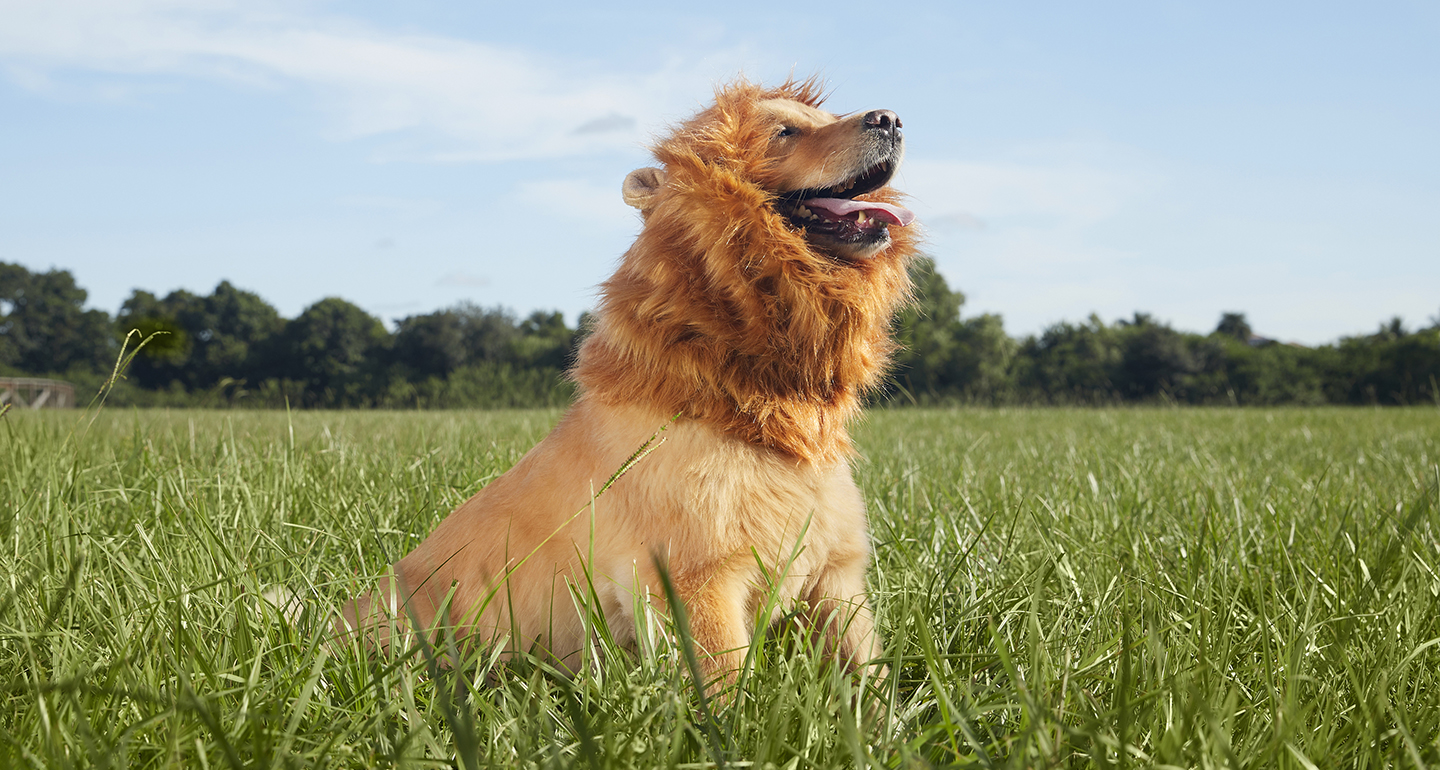 Is your pup king of the jungle? Probably not. But the odds of him being king of your household are good. So, stop looking for the perfect Halloween costume because this dog lion costume from Frisco is it!

The best part about this costume is that it’s just a headpiece, making it easier for even a sensitive pooch to tolerate. Besides, he already has the paws, the tail and the swagger of a lion, so the mane is really the last piece of the puzzle. 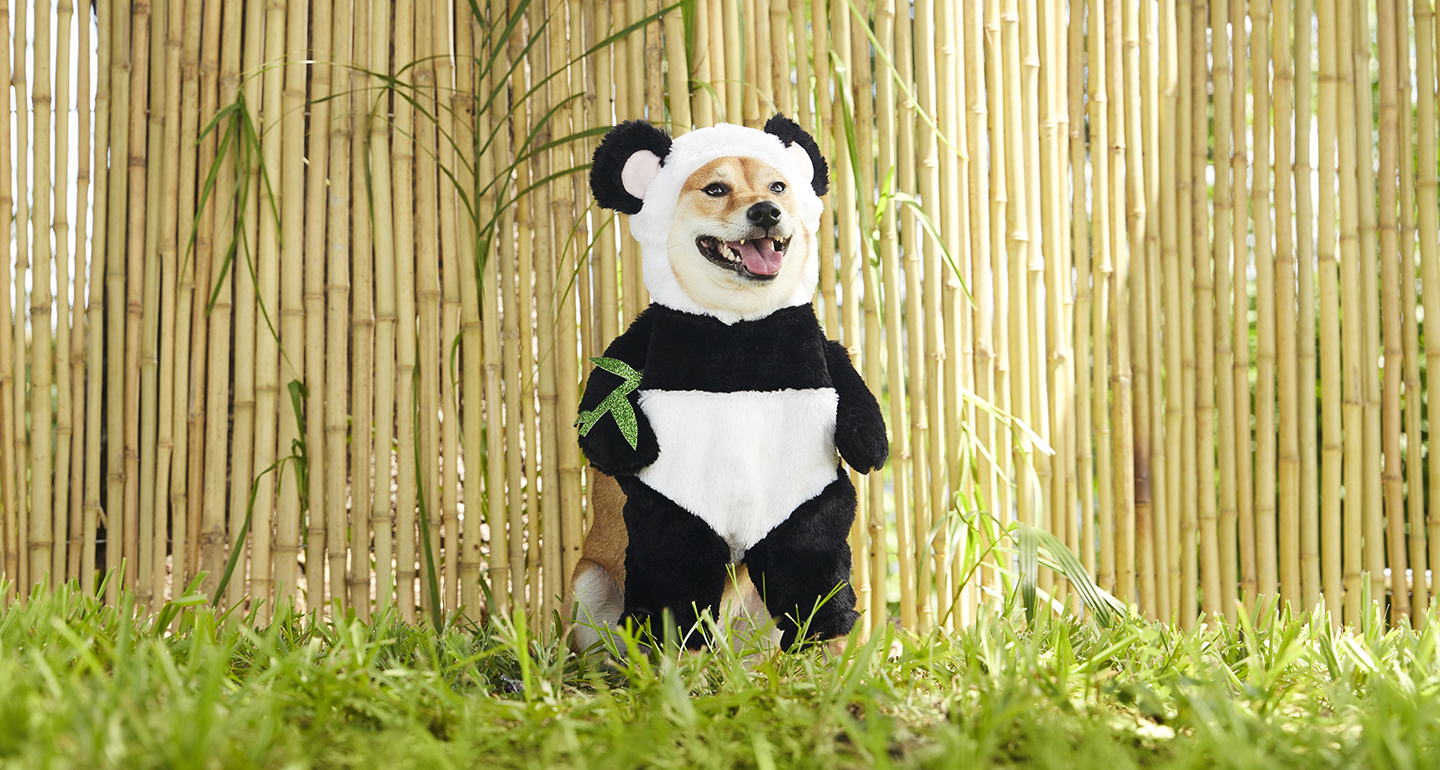 Outfit your floof with the cutest and cuddliest of all the animal costumes with Frisco's panda dog costume. The step-in design makes it look like your dog is a miniature panda bear from the front. Just wait until you see him run in this costume. It's sure to bring a smile to your face! 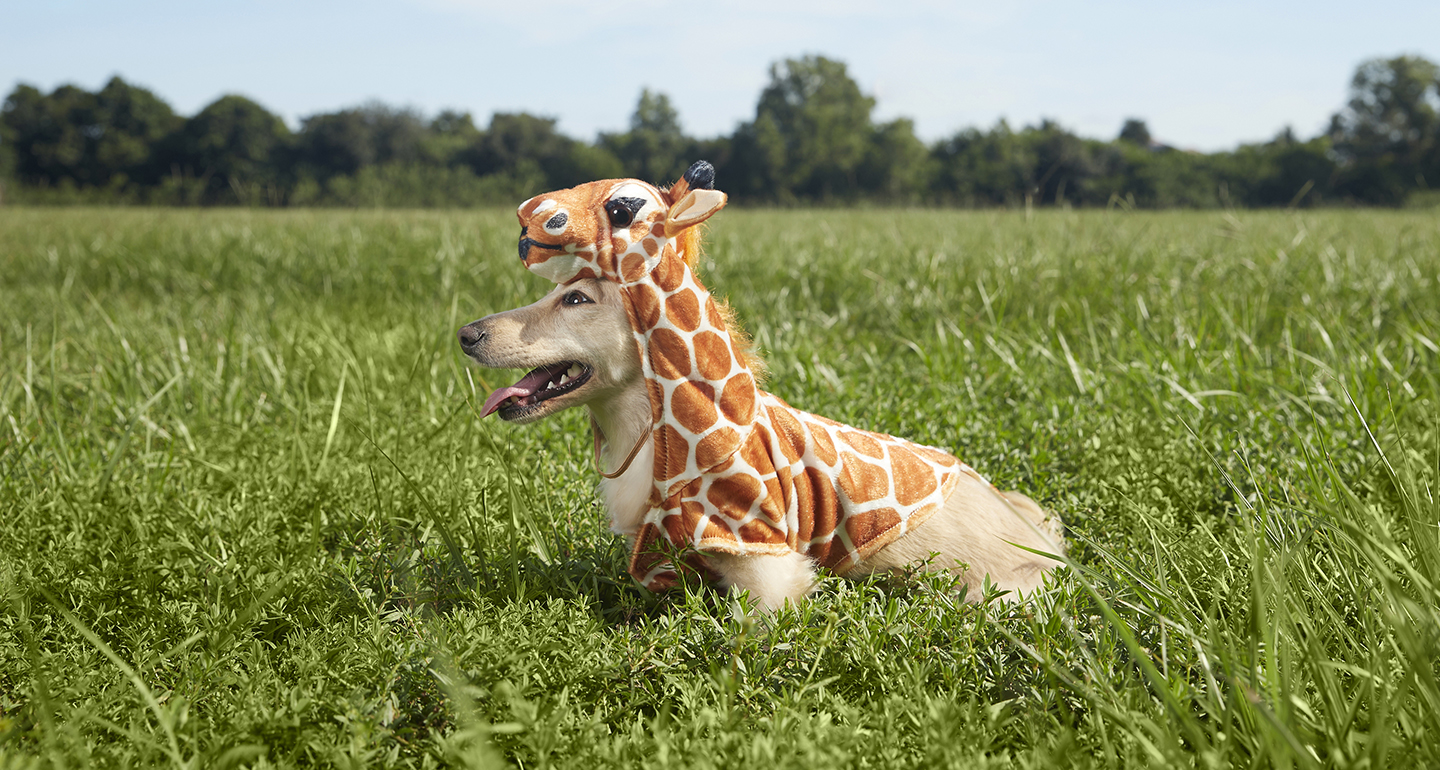 Make your tiny fur-tot feel like a long-legged god (or goddess) with this gorgeous giraffe dog costume from Rubie's Costume Company. The style of this costume is similar to that of a coat or jacket, with a plush fleece hood that looks as if a miniature giraffe is going for a piggy-back ride on your pup. The facial features are freakishly realistic, which should make your dog’s costume really stand out among the rest and make you a very proud hooman. 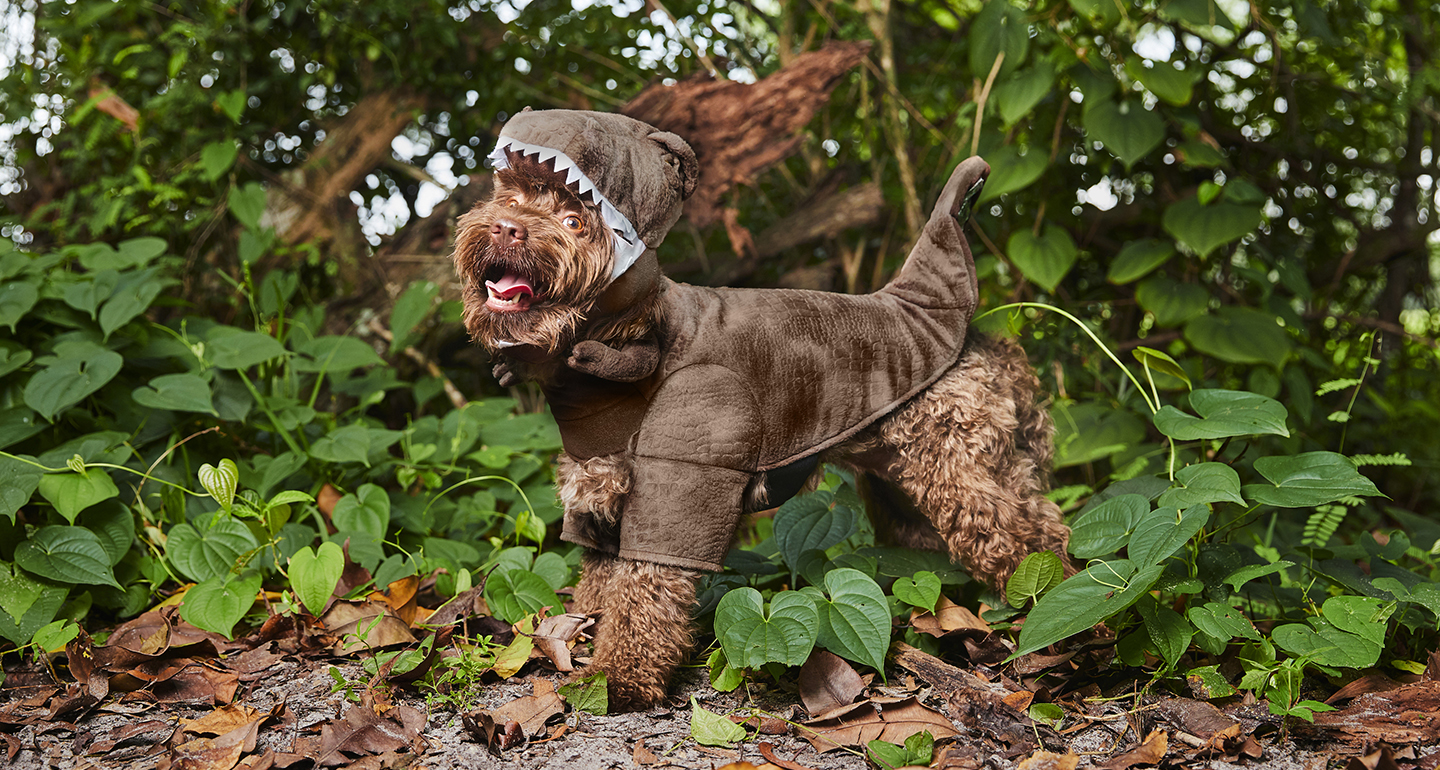 If you’ve seen “Jurassic Park,” then you know how mesmerizing and intimidating velociraptors can be. So, if you want your dog to stroll into a costume party and cause the music to stop and a hush to fall over the crowd, this is the costume for you!

Available in five sizes for dino lovers big and small, the two-piece costume includes a scale-textured bodysuit and a headpiece with embroidered eyes. 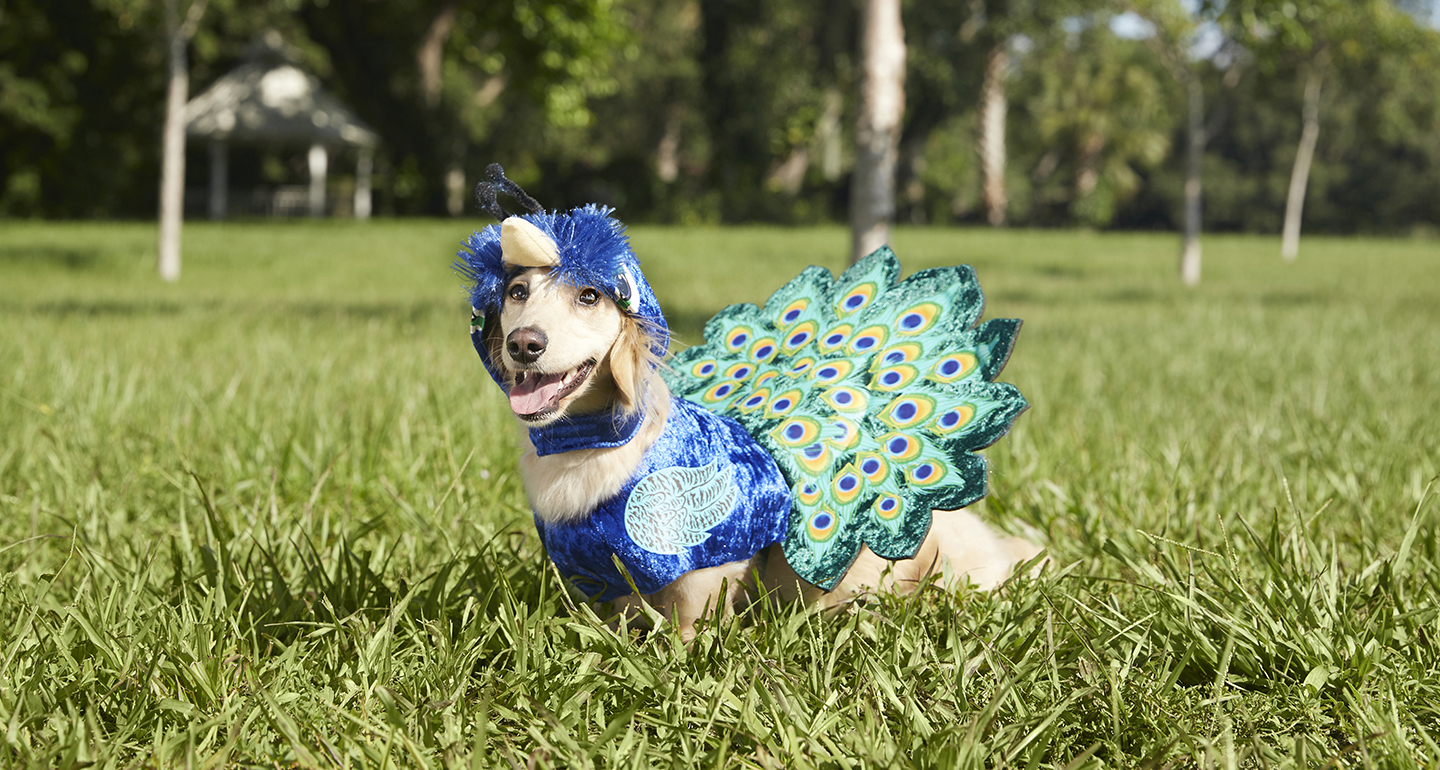 Some dogs just know how cute they are. And this peacock costume from California Costumes is the ideal attire for those dogs. Why? Because confidence, swagger and self-love is a total peacock vibe. They acknowledge their beauty and love to show it off.

In this peacock costume, your pup can do the same! Available in several sizes, the costume includes a bodysuit with a vibrant green and blue feather design, and a matching royal-blue headpiece complete with a beak.

With any one of these costumes, your dog child will be the hit of the Halloween party, and the Internet.