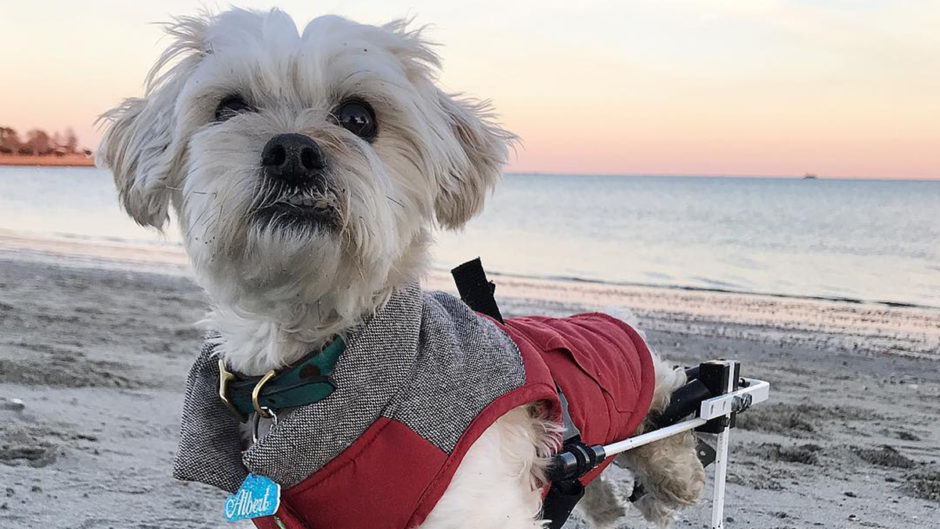 For these pets, luck doesn’t come at the end of a rainbow or in a four-leaf clover. Instead, luck showed up in the form of families with open hearts and homes. Below are eight heartwarming stories of rescues who found a forever home and second chance at life.

Found in a ditch on the side of the road, Albert was paralyzed from his hips down, likely after being hit by a car. The little pup’s luck, however, was about to change.

After being rehabilitated by a local shelter and learning to use a wheelchair, Albert was adopted by his smitten mama, Jill Lawson. Today, his mom says he enjoys long walks on the beach in Connecticut with the aid of his wheelchair and snuggles on the couch with his rescued siblings. In his spare time, Albert is an advocate for special-needs pets.

Read more about Albert and his journey here.

When a Good Samaritan brought Lobstah to the San Francisco Society for the Prevention of Cruelty to Animals, the little kitten was in rough shape. Not only was he fending for himself on the streets of San Francisco, but he had a paw deformity and life-threatening diaphragm abnormalities.

Despite Lobstah’s significant health problems, veterinarians decided to operate on his chest, saving his life with an experimental procedure. His “lobster claw” paw was left alone and is now his signature look on Instagram. His adoptive pet parents, John and Leda Bigelow, report that he uses the unusual appendage to hold on extra tight during shoulder rides.

Everyone knows you can adopt cats and dogs, but Mr. Bagel wants you to know that there are chinchillas looking for homes, as well!

After being adopted from a California shelter by his parent Steve Byun, Mr. Bagel has used his impressive Instagram platform to spread the word about pet adoption and animal rights, as well as to remind his adoring fans to never wear real fur.

Once upon a time, Popeye was a stray pup on the streets of Los Angeles. Now he’s a well-established Instagram #foodie.

Photos of Popeye accompanying his pet parents to hot spot restaurants became so popular, he began starring in his own account. Next up—a cooking show?

Monty doesn’t look like a “normal” cat—and that’s exactly why the Internet loves him. Monty was born without a nasal bridge, creating a unique face. While many passed him by in the shelter, his adopters, Michael Bjorn and Mikala Klein, say they knew the sweet, gentle cat was meant to be theirs.

It’s almost impossible to resist smiling when you see Meatball’s face. Despite once facing an uncertain future in a crowded shelter, the rescued Pit Bull is a happy-go-lucky goofball.

Adopter Lisa Reilly says she fell for Meaty’s huge grin, stocky frame and zen disposition. A true ham for the camera, he now spreads adoption awareness on Instagram with his rescue siblings.

Puka is a rescued Pit Bull who happens to be besties with Rocket Larry, a rescued tortoise. Along with their mom, Christine Hilberg, the endearing odd couple help raise awareness about adoption and animal welfare. Cheers to these good boys!

Alice and George (top) and Arwen and Mumble (bottom). Courtesy of bunloafable/instagram

Do you have enough rescue bunny snuggles in your life? If not, meet the Bunloafable crew. George, Alice Arwen and Mumble are a lucky bunch of bunnies who are living the good life in Seattle, Washington.

After adopting one rabbit, Brittany Strachota says she caught the bunny bug and began fostering and advocating for other animals in need. Her gang eventually grew to four, and now everyone has a cuddle buddy!

While these pets can definitely be called lucky, Strachota says the same for herself. After all, the human-animal bond is a two-way street that keeps on giving!

For even more heartwarming tales of rescue pets, be sure to check out all of our pet stories.