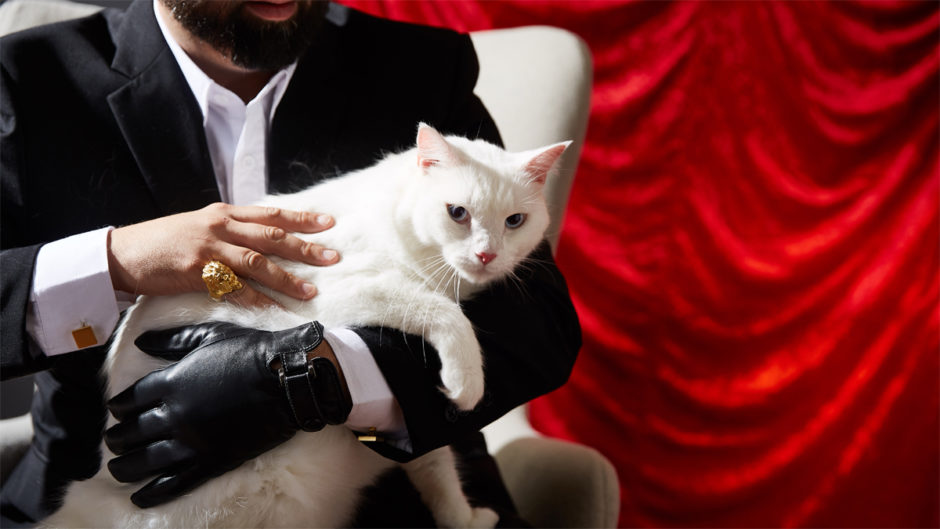 Behind every good villain—and every powerful witch—lurks a faithful feline companion. It makes sense—these cunning creatures are intelligent, quick on their feet, sophisticated and mysterious. From cat cartoon characters who star as magic cats to famous cats on TV or the big screen, here’s a rundown of our favorite “evil” cats.

Although we know there’s no such thing as an evil cat, there are numerous movie cats, TV cats and cat cartoon characters who are portrayed as the not-so-nice underlings of their villainous owners.

The name Azrael is associated with the Angel of Death in many religions. Perhaps the name is fitting for the Azrael we’re talking about—a brown cat with a white chest who serves as Gargamel’s right-hand evil cat in the “Smurfs” cartoon. Gargamel is a wizard who hates everyone, especially the Smurfs, and tries to work every angle to his advantage by forming false alliances to gain something. This wizard and magic cat duo doesn’t necessarily get along—Azrael is much more clever, and happily points out the flaws in Gargamel’s many plans to capture the Smurfs. He does help his owner carry out each ill-fated plot, despite Gargamel’s harsh treatment of him. This is a bad guy who’s lucky his sidekick sticks around.

When it comes to cat names from movies, you can’t leave out the Dr. Evil cat, better known as Mr. Bigglesworth. He’s got an amazing name, and an even more intriguing backstory. This kitty started out as a long-haired white Persian, but lost all his fur after traveling with Dr. Evil in a cryogenic capsule during a hasty retreat. The cat behind the persona is a champion purebred hairless Sphynx named Ted Nude-Gent. At the top of the list of the most easily trained breeds, Sphynxes are also some of the most sociable cats. In fact, the filming of each of the three “Austin Powers” films was held up more than once because of Ted’s fondness for sleeping on Mike Myers’ lap.

In the realm of evil cat cartoon characters, M.A.D. Cat from the 1980s “Inspector Gadget” TV series certainly makes the grade. This plump, gray kitty has black and white stripes and a distinctive black widow’s peak mark. Switching between a mocking smile and a scowling smirk, M.A.D. Cat could have easily been Grumpy Cat’s distant relative. As the mirror of his infamous owner’s emotions, M.A.D. Cat would snicker or howl depending on whether Dr. Claw was delighted by his evil-doing or displeased when his plans were foiled. He is intelligent, as he seems to understand when his master speaks, and he also has his own arch-nemesis: Brain, the dog who belongs to Inspector Gadget’s niece, Penny. (Brain and Penny are the true detectives who secretly solve Inspector Gadget’s cases for him.)

Bonus Trivia: In the live-action movies, M.A.D. Cat is cast as a shorthaired white cat named Sniffy in the 1999 film, and then as an unnamed, longhaired white Persian in the 2003 sequel.

The Not So Evil Cats

And now for the talking magic cats. These kitties serve as guides in one way or another—whether they’re helping teenage witches, helping kids battle witches who have come back from the dead, or sharing the feline mystique with a newly initiated cat superhero.

Sabrina is an ordinary teenager, only she’s also a witch, and she has a talking black cat. In this 1990s TV sitcom, Salem’s character is an animatronic puppet most of the time, but there are episodes where he appears as a real cat who’s actually played by a team of black cats—Elvis, Lucy, Witch and even a cat whose real name is Salem. Salem steals the show with his witty personality, although he has a sordid past. Originally a warlock, he was turned into a cat by the Witch’s Council for trying to take over the world. Salem was sentenced to 100 years as a feline with no magical powers except the ability to speak. Despite his long sentence (although we don’t think being a cat is a punishment), this kitty is pretty witty and serves as the show’s comic relief. He’s loyal to Sabrina, but he is a troublemaker at heart and tends to get her into a lot of trouble.

Bonus Trivia: In the episode “Cat Showdown,” we find out that Salem’s last name is Saberhagen.

Jiji isn’t one of the usual witch cat names, but this black cat does love flying around with his owner, Kiki. As a 13-year-old witch in training, it’s time for Kiki to leave the small rural village where she grew up to go spend a year on her own, learning how to become a full witch. Jiji is a cute animated feline with big eyes, two tiny fangs and unique, purple-tinted ears. In the American version of the anime, Jiji is talkative and proud, voiced by Phil Hartman of “SNL” fame. But in the original Japanese version, Jiji is cautious and helpful, being played by female voice actress Rei Sakuma. Both Jiji personas are faithful guides through Kiki’s ups and downs as she weathers the storms of adolescence and overcomes the frustrations of her new delivery service.

Bonus Trivia: In the town they move to, Jiji meets a white cat named Lily, and the credits show the couple with their litter of kittens.

Speaking of famous cats, Thackery Binx is the resident feline star of “Hocus Pocus.” This time, he’s a boy from 1693 Salem who has been turned into a black cat for eternity by three witches. His fate was sealed when he stood up to the trio while trying to protect his sister from their evil intentions. On Halloween night 300 years later, the witches are resurrected by a kid who’s new in town. And guess who the hero is—the black cat, of course! Binx joins forces with a girl named Allison to drive the witches out for good.

Bonus Trivia: The cat handler for Binx was animal trainer Larry Madrid, who also worked on “Forrest Gump,” “Harry Potter and the Sorcerer’s Stone,” “Marmaduke” and “The Smurfs” movies.

When you’re Catwoman, you need a feline spirit animal and a backstory filled with these graceful, stealthy creatures. An Egyptian Mau plays Midnight, the lead cat who brings Patience back to life after drowning. Midnight bestows the Catwoman life force on her, and this begins her life as an anti-heroine, always pawing the line between good and evil. Egyptian Maus are known for intelligence and loyalty, and they were worshipped by pharaohs and kings in Ancient Egypt. You can see why—these magic cats are surrounded by mystery, and legend has it that they have some of the fastest feline reflexes. They have spotted coats and stunning green eyes with a wildcat demeanor. As the only naturally spotted domestic breed, they can be silver, bronze, smoke, black, blue silver, blue spotted, blue smoke or blue, according to The Cat Fanciers’ Association.

Bonus Trivia: Different cats were trained to enter the shot using different sound cues to vary the action in a scene.

As you can see, cats pretty much steal the show, whether they’re black cats who serve as mentors to witches, cartoon cats who help supervillains carry out evil plots, or magic cats with the power to turn the average graphic designer into their new leader. Even though not all cats have supernatural abilities, they are capable of some pretty incredible feats. Here’s a curated list of cat books that share stories of these amazing magic cats in action:

Chicken Soup for the Soul: The Cat Did What?: 101 Amazing Stories of Magical Moments, Miracles and… Mischief

Homer’s Odyssey: A Fearless Feline Tale, or How I Learned about Love and Life with a Blind Wonder Cat

Lil BUB’s Lil Book: The Extraordinary Life of the Most Amazing Cat on the Planet

Cat Daddy: What the World’s Most Incorrigible Cat Taught Me About Life, Love, and Coming Clean