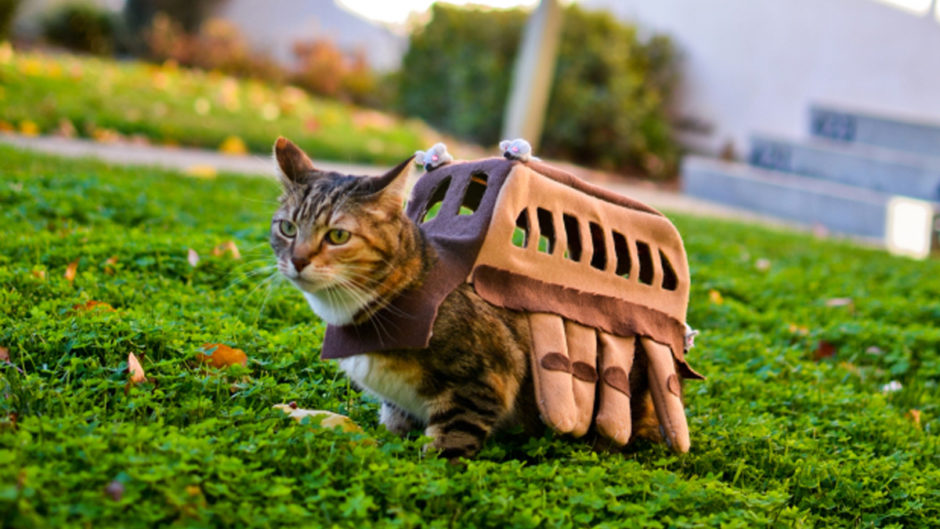 A DIY pet costume not only gives your pet the opportunity to join in on all the Howl-o-ween fun, but it also gives you a reason to get crafty while sipping on some apple cider.

Are you thinking of dressing your pets up in homemade cat costumes and dog costumes? The good news is that you don’t have to shell out a ton of money to create killer pet costumes. You can make picture-worthy costumes for cats or dogs that will turn all the heads on All Hallows’ Eve. Let these eight brilliant DIY pet costume tutorials guide you.

Whether your fur babies are typically naughty or nice, there’s a costume that fits their vibe! This tutorial by Vicky Bermudez shows you how to create an angel and devil headband that your pet can adorably rock on Halloween.

For the angel, you’ll need:

For the devil, you’ll need:

Turn your four-legged child into The Boy Who Lived with this magical Harry Pawter costume by Instructables user sarahndipity.

With felt as the main material for this look, it might just be light enough for your pet to wear for more than five minutes!

Holy clever Halloween costume, Batman! This “Bat Dog” costume only cost YouTuber Sea Lemon $2 to make (sans harness), and the end result is lightweight and sleek enough for your pup to save the day in the dark of night.

Revive the Beanie Baby craze of the ’90s by turning your pet into a giant version of these fuzzy toys with this tutorial by Cats & Crafts. It won’t take much time, effort, or supplies, and the result is beyond endearing.

This is also a costume that your cat may not even realize is on since it’s not much more than a collar. Plus, this tutorial contains three other DIY costumes for cats, including a witch, a Starbucks cup and a s’more!

You know that your dog or cat is a precious creature, but just for Halloween, why not pretend they’re a terrifying slayer of breakfast food? This amazing Cereal Killer costume by Sew Doggy Style is easy to make, and sure to win any pet costume contest in town.

Of all the Halloween costumes you could choose for your cat, you probably never expected a bus to be such a brilliant choice. But this costume by blogger Sweet Ipomoea is just too creative to pass up. It’s based on the Catbus character from the beloved Japanese animated movie, “My Friend Totoro.” Though this lacks actual steps to recreate, there are so many images that it’s basically a photo tutorial. And based off of the photos, you’ll need the following to create the amazing Catbus.

Turn your pup into a signature cocktail on Halloween with this Martini Dog costume by Homes Alive Pets. There are no instructions with this tutorial, but based on the photo, you’ll only need a few items to recreate the look—most importantly, the cone of shame. The rest you can use from items you probably already have around the house or you can make an “original dog-tail.”

While this Minion Cat tutorial by 2 Cats & 1 Doll might be a little more labor intensive, what you’re left with is a cat with wearing a Minion hat, so it’s worth the effort, am I right? What a beautiful tribute to those tiny, yellow, babbling monsters.