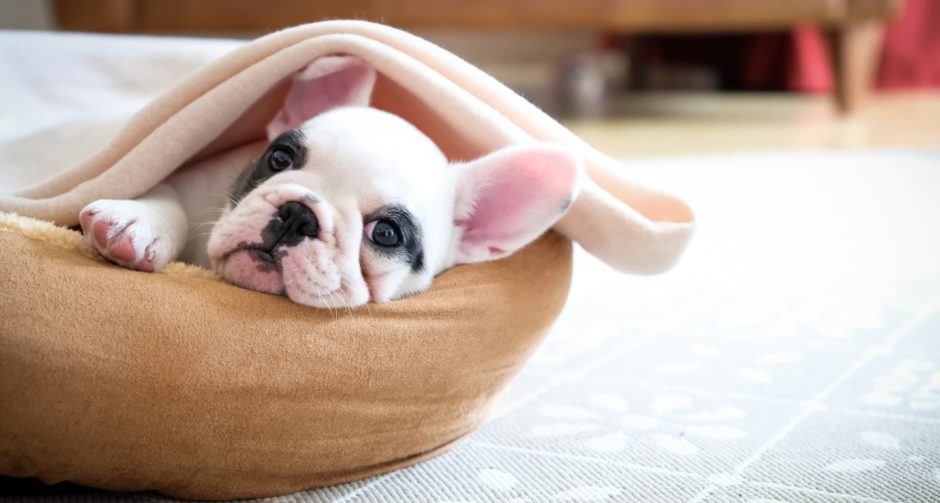 Renowned for their easy-going nature, keen intelligence and giant, bat-like ears, French Bulldogs are one of the most popular dog breeds in the United States.

Their rise in popularity began as far back as the mid-1800s when their ancestors, toy-sized English Bulldogs, gained prominence in England during the height of the English Industrial Revolution, according to the American Kennel Club (AKC).

From there, these dogs found their way to the French countryside where, over the next few decades, cross-breeding with other small dogs, most likely terriers and Pugs, led to the development of the breed as it exists today. By the end of the 1800s, these French Bulldogs, as they were now named, weren’t just popular in Europe; they were well-loved in the United States as well. Today, they are consistently ranked among the top 10 most popular dog breeds, as reported by the AKC.

Affectionately known as “Frenchies,” these delightful dogs do require some specialized care, mainly due to their adorable pushed-in faces. If you’re looking to add a French Bulldog to the household, you should get to know their common health issues and specific care needs to make the best decision for your family.

1. French Bulldog’s Have a Laid-Back Personality

“The breed is a fantastic, laid-back type of dog,” Crestejo says, adding that they make excellent companions for city and apartment dwellers. “They’re great companion dogs for humans who have small living spaces.”

2. French Bulldogs Have an Independent Streak

You also can expect your French Bulldog to be independent.

“Like most Bulldogs, they kind of do what they want, when they want, on their schedule,” Crestojo says.

This trait does not makes them hard to train—far from it, she explains. Pet parents just need to be more aware of their individual dog’s reward system and start training them early on.

In fact, starting early is essential in all aspects of Frenchie care.

“It’s very important to keep up with veterinary visits [and start early on] so that subtle changes in your dog’s heath can be noted earlier,” Dr. Wylie says. “Early evaluation can help prevent complications from brachycephalic syndrome, and recommendations may be made depending on the severity of noted changes.”

This leads us to our next fact about Frenchies.

3. French Bulldogs Are a Brachycephalic, or Short-nosed, Dog Breed

Perhaps the most notable feature on a French Bulldog, after the big ears, is the smushed-in face.

“Frenchies are considered a brachycephalic breed, which means they can have a hard time breathing,” Crestejo explains. “Extra caution should be taken during hot months and strenuous exercise.”

Dr. Wylie echoes this statement and adds that “brachycephalic dogs may have respiratory issues related to narrowed nasal passages and tracheas, an elongated soft palate, or sacs within the voice box that get turned outwards. Because of these issues, brachycephalic dogs need to work harder to breathe than other dogs and have an easier time breathing through their mouth than their nose.”

She stresses that parents of Frenchies should be particularly careful that these pups don’t overexert themselves.

Due to the potential for breathing problems, Dr. Wylie recommends pet parents use a harness, like the Puppia soft dog harness, when walking a Frenchie.

“Using a harness when on leash instead of a collar is important to help limit the pressure placed on the upper airways and trachea,” she says.

Also, if you want a quiet sleeper, a French Bulldogs might not be your ideal pets. Their unique airways make them prolific snorers!

4. Keeping a Frenchie Cool Is a Must

Frenchies also are prone to overheating, so it’s important to keep them cool.

“Avoid hot or humid conditions, as those can exacerbate brachycephalic syndrome,” Dr. Wylie says. “Keeping them in air conditioning when it’s hot is helpful.”

While a pool might be a great way to keep pooches cool in hot weather, Frenchies are not great swimmers and should be monitored very closely around any water. Their lack of aquatic prowess is related to both their brachycephalic features, which make it difficult to keep their noses out of the water and breathe while dog paddling, as well as their overall barrel body shape, which is heavy and difficult for their small legs to support.

“They can be more prone to sinking,” Dr. Wylie says.

5. Frenchie’s Are Prone to Obesity

Keeping any dog at a healthy weight is important, but even more so when it comes to Frenchies.

“Weight management is very important in these dogs as obesity can exacerbate symptoms of brachycephalic airway disease, orthopedic issues, and even put them at risk for conditions that they are not more susceptible to,” Dr. Wylie says.

Additionally, according to Crestojo, Frenchies are prone to becoming overweight.  “Proper diet should be top of your priority for this breed,” she says.

There are foods out there specially formulated for Frenchies, like Frenchies by Royal Canin, to help maintain a healthy weight while ensuring your dog has a balanced diet.

Despite the challenges that come with a brachycephalic dog, Frenchies really are great pets.

“They are fun-loving, inquisitive and outgoing with a little spit-fire attitude,” Crestejo says.