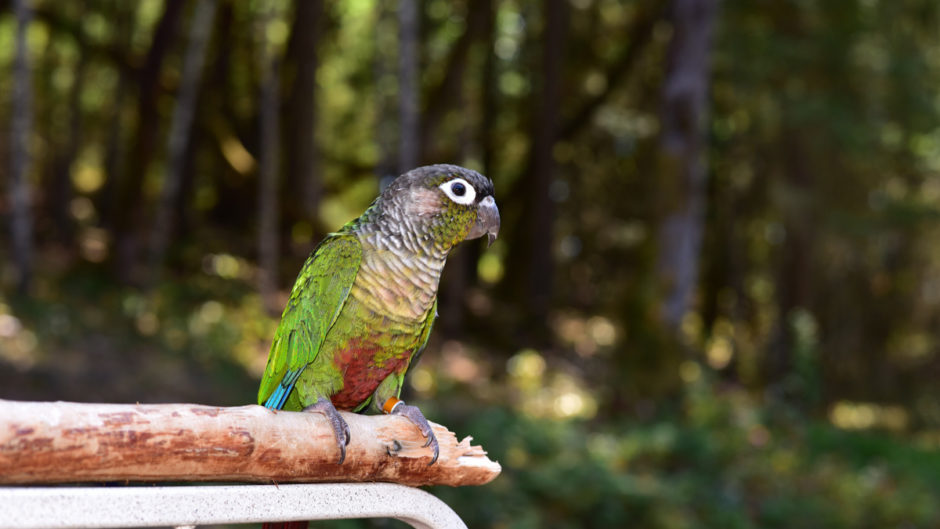 Don’t let their small stature fool you; pint-size green-cheeked conures have huge personalities. Originally from South America, these conure clowns will win over even the coldest of hearts. With different color mutations and friendly dispositions, the green-cheeked conure might be the next parrot you’re looking for. Here’s what you need to know:

1. In general, green-cheeked conures are quieter than other conures.

Of course, this is not to say that they do not make any noise. A certain degree of sound in parrots is inevitable. In addition, each individual bird is different, and some will vocalize more than others. But if you’re looking for a conure that won’t bother your neighbors, the green cheek might fit the bill. This has made the species popular with apartment dwellers.

“They are portrayed as being very nippy, and some can be, but that is usually environmentally encouraged or a young bird that has to learn its social limits,” said Mary Covault of Feathered Companions Aviary.

Like many parrots, these conures will benefit from being well socialized.

“Green cheeks can be excellent with large or small families, but socialization early-on is important,” Covault added.”Plus they are sensitive — like most parrots — and if a member of the family is hostile to them, they will know it and either be afraid of them or aggressive toward them.”

Despite being one of the smaller conures, these birds share many traits with bigger parrot species. They are intelligent, and are capable of learning multiple tricks. They are not especially good talkers, but can learn some speech. Green-cheeked conures are also known for their playfulness and acrobatics. They need plenty of supervision to avoid getting into trouble.

4. Green-cheeked conures can be cuddly.

Again, it’s important to keep in mind that every individual bird is different. Generally though, these conures are regarded as affectionate companions. Many enjoy petting, and tolerate handling. Some will even snuggle up against your neck or cheek. These birds want to be with you and need hours of interaction every day.

5. Be careful about avoiding breeding stimuli.

Unless you are trying to breed the birds, it’s best to avoid anything that would cause green-cheeked conures to go into breeding mode. This will prevent unneeded stress on the bird.

“Conures are cavity nesters, so if one doesn’t want to stimulate breeding behavior, don’t give them dark, closed-in areas in their cages or play [areas],” Covault said. “I give all of my conures open-fronted sleepboxes though, because they do like to sleep in an enclosed area and feel more secure there, and they will chew on them. If the front faces the light source, it’s light during the day, so nesting is not encouraged.”