Just because it’s cold out doesn’t mean you can’t get outdoors with your pup. There are several winter dog sports, such as skijoring, to get involved with. So, grab your gloves, put dog boots on your pup and check out four dog sports for a fun and active winter. 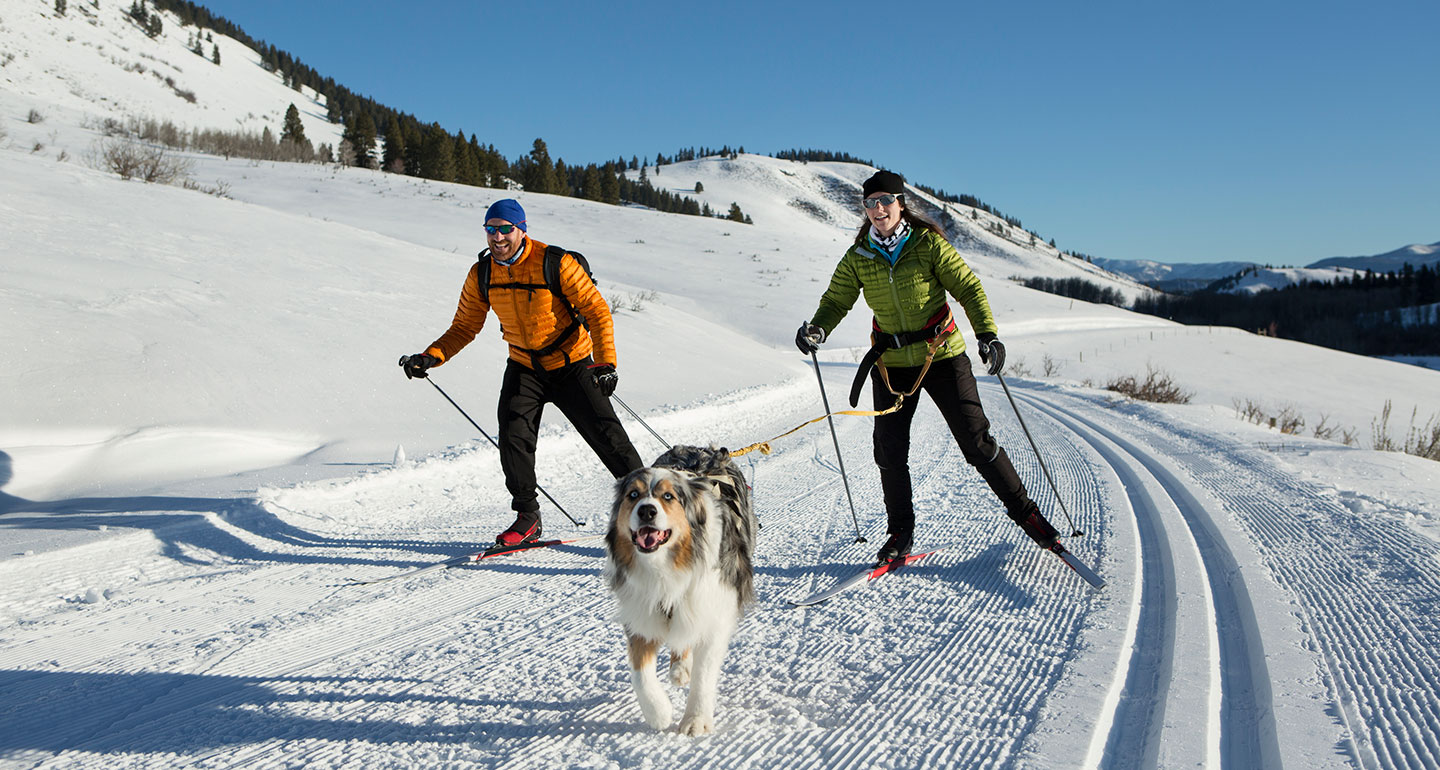 This Nordic sport has developed quite a following in northern states with regional and national championships and even international competitions. In 1928, Skijoring was actually an Olympic demonstration sport in the Winter Games in St. Moritz, Switzerland.

The sport takes its name from a Norwegian term that means “ski driving.” Predictably, Norway tends to dominate the sport at its highest levels.

Essentially, skijoring is like cross-country ski racing, except with one or two dogs leading the way. Races are generally 5-20 kilometers (about 3-12 miles), according to the American Kennel Club (AKC). Imagine Marty McFly from “Back to the Future” hanging onto the back of a car, substitute skis for the skateboard, a dog for the car, and you get the picture.

You don't need to own a team of Northern breed sled dogs to participate, according to the AKC. Any dog over 35 pounds who likes to pull is a candidate. All participants need are skis, a tether and a harness for the dog. Do NOT use a collar, as it can injure your pet.

“German Shorthaired Pointers, Greyhounds, German Shepherds, Dalmatians, Border Collies and Golden Retrievers are just a few of the breeds seen at skijoring competition in the states,” according to the AKC.

Kevin Murphy, president of Skijor USA in Lino Lakes, Minnesota, which sanctions and stages events and provides training and clinics, says the sport provides great bonding between humans and animals, as they really need to work in sync to succeed. It is also a good idea to attend a clinic and train before entering a race.

“It’s great for your dog, and it’s something that’s fun,” Murphy says.

Each year at the end of January, the Loppet Foundation hosts a four-day festival with more than 30 events, including skijoring and sled-dog races. Anthony Taylor, adventures director for the foundation, says his group stages clinics in addition to competition.

“It’s super accessible,” he says. “It’s growing, and there’s a lot of interest from people who love pets and are looking for more opportunities to integrate.” 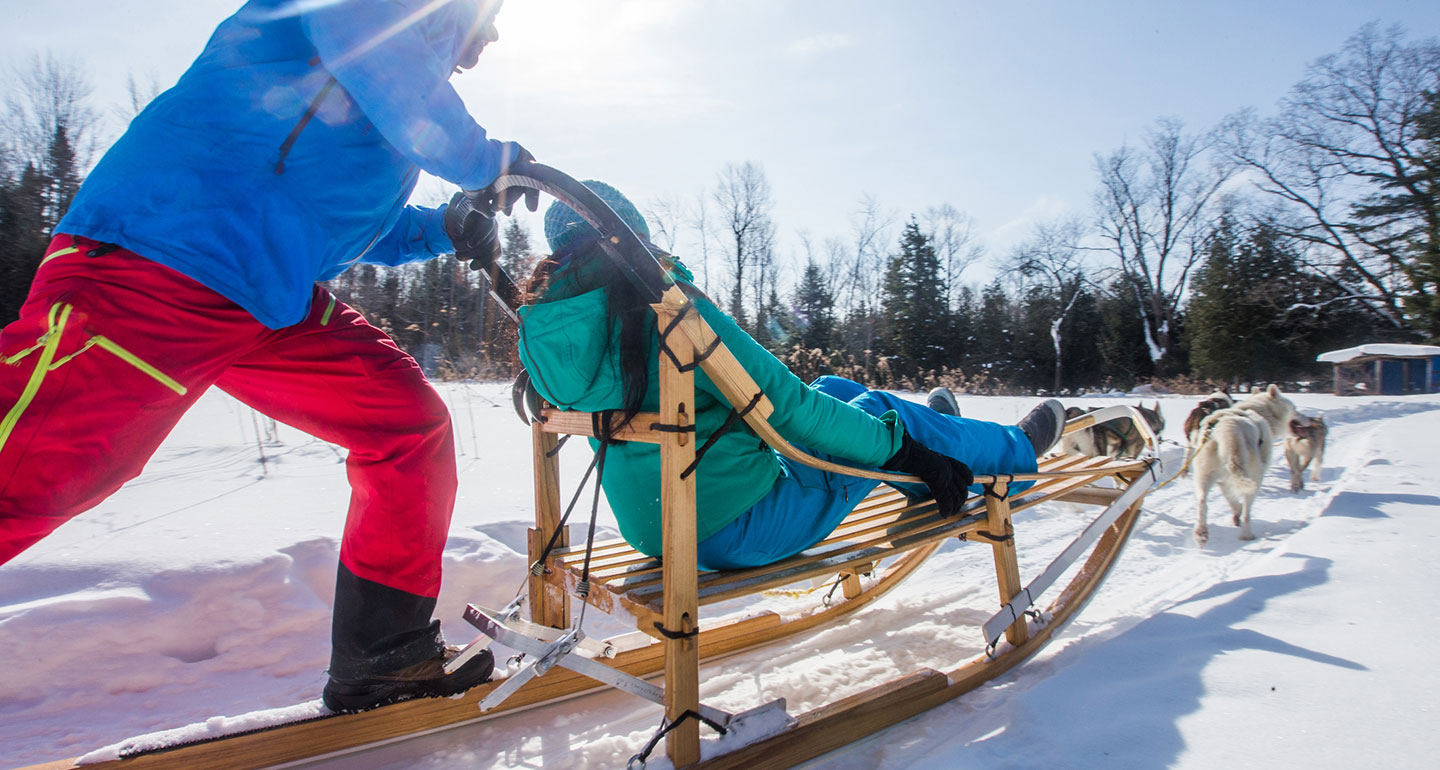 The Iditarod, known as “The Last Great Race on Earth,” is an 8-15-day race through Alaska, and it’s considered the crown jewel of sled dog racing. However, you don’t need a team of 16 world-class pullers or to spend weeks on the tundra to be involved. Dog sledding was introduced four years after skijoring as an Olympic demonstration sport in Lake Placid, New York, only to be removed.

“There still are larger teams, but the smaller teams are growing real fast,” says Richard Hancock, co-owner and manager of Sled Dog Central, a dog sledding website based in Spokane, Washington. “The fastest growing section of mushing is with one- and two-dog teams.”

Hancock’s website contains a wide variety of information for mushers and lists more than 200 races annually in North America.

Although Huskies and Malamutes are the dogs most of us equate with the sport, Hancock says the elite dogs in today’s sport are mixes of Husky and hound, which combine the stamina of Huskies and the flat-line speed of hounds. It costs about $1,000 for a used sled and harnesses, Hancock says, adding that people in mushing often lend equipment and mentor those exploring the sport.

For this sport Hancock has one precaution: “Be careful; it’s addicting.” 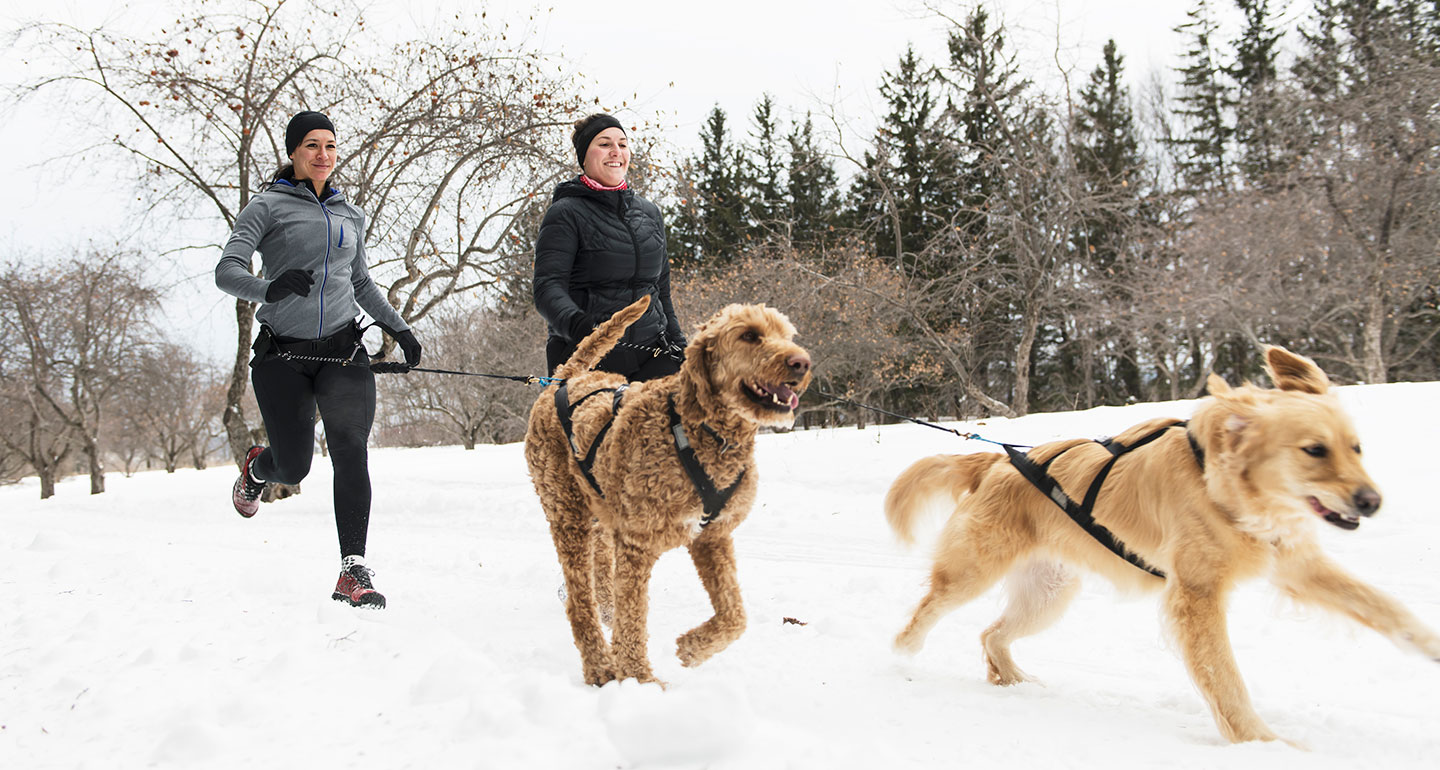 Canicross is a cousin of sled dog racing and skijoring. It was created as an offseason workout regimen for sled dog racing before developing into its own sport. Particularly popular in Europe, the sport combines cross-country running with canines harnessed with a bungee cord to humans, and it is growing in the United States.

Although not a winter sport per se, as it can be practiced in any weather, Canicross enjoys crossover appeal with skijorers and mushers. 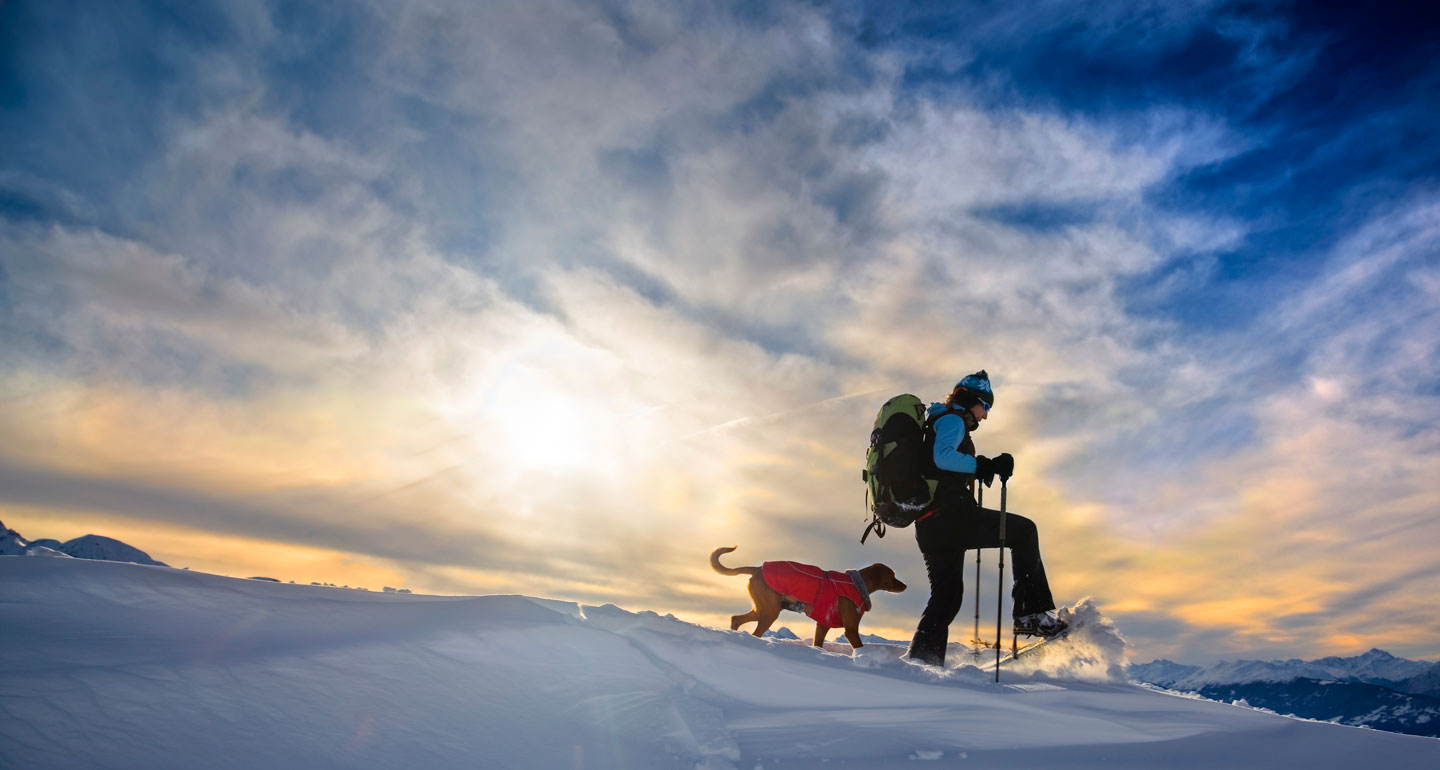 Fans of outdoor activities really can bond with their pets by enjoying trails and slopes thanks to snowshoes. Just be sure your dog can handle the rigors, particularly if you intend to go into areas of deep snow and powder. You also can research dog-friendly trails to find routes that are easier on four legs and safe.

Although several breeds, such as Huskies and Malamutes, are built for even the most inclement conditions, not all dogs are meant to be winter warriors. Think it through before you wander into the great beyond with your pup.

First off, it’s worth a trip to the vet—and maybe even your own doctor—to gauge your fitness for strenuous physical activity.

When being out in the winter elements, frostbite—particularly to paws and ears—and hypothermia are very real concerns. For thin and short-haired dogs, consider putting your pups in dog sweaters or coats. If your pet has a lot of fur on her paws, cut it back to keep snow and ice from collecting there. Consider dog booties for many breeds.

Active dogs in winter also need to be well-hydrated, and it’s always a good idea to consider adding skin and coat supplements to their food or use natural moisturizers, such as coconut oil.

With a few simple precautions, a world of frosty fun awaits dogs and their parents. A whole landscape awaits and is best enjoyed with your best friend by your side. As Murphy says regarding winter activities with dogs, “It’s a great way to enjoy the winter, rather than just endure it.”

By: Greg Mellen
Greg Mellen is a freelance writer with more than 30 years experience in newspapers and magazines. Over the years, he won more than 30 writing awards at the national, state and regional levels. He lives in Long Beach, California, where his 14-year-old cat, Cleo, patiently plots his demise. He keeps the cat in check by threatening her with a puppy as a brother.