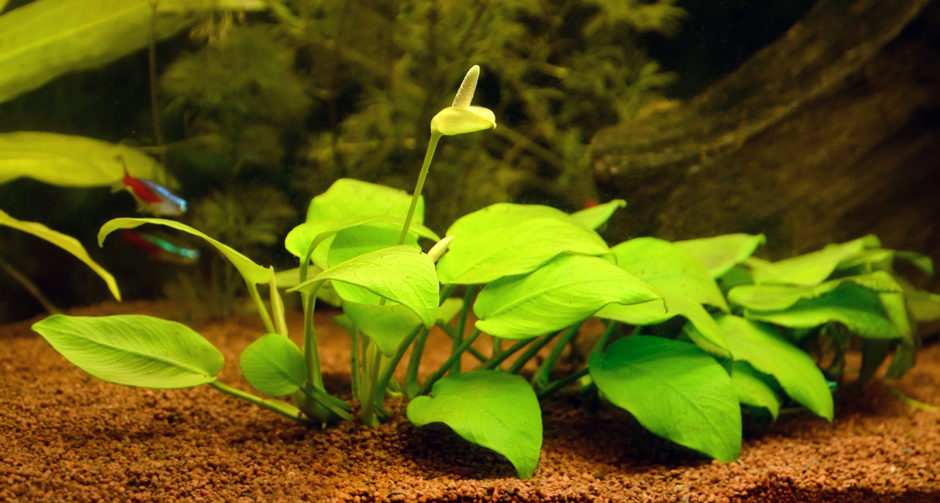 Brackish waters are a combination of freshwater (e.g. river discharge) and seawater, and their ecosystems include salt marshes, estuaries, tidal flats, mangrove forests and other aquatic-to-marine habitats. These environments host a great variety of interesting and beautiful brackish water plants; some of which can be hosted in an aquarium.

The Java fern lives in swampy, flooded jungle environments and are so tough that they often are used successfully in brackish water aquariums. This primitive plant grows attached to a hard surface, such as stone or wood (rather than in the sand or gravel bed), where it takes up nutrients directly from the water column.

Its foliage discourages grazing by otherwise unfinicky eaters such as scats. Though it is a slow grower, the Java fern can survive under very low lighting. It prefers temperate (55-65 degrees Fahrenheit) or tropical temperatures (75-85 degrees Fahrenheit).

The Java fern is an incredibly resilient and forgiving aquarium plant. It can withstand rather rough handling, like being ripped apart at the root mass and glued to logs or stuffed into shadowy corners.

Like the Java fern, the Anubias plant usually is found in swampy jungles. It’s a sturdy, slow-growing plant that attaches to hard surfaces.

The broad leaves of the Anubias add to the shadows cast by the logs and thick branches it might live on. This species is adaptable to varying light conditions and, though it really likes a tropical environment, it tolerates slightly cool conditions.

Though tough and fibrous, the Anubias plant generally is safe for fish herbivores. Somewhat amphibious, A. barteri can grow a bit out of water and is an especially great choice for a mudskipper setup.

Sago pondweed occurs almost worldwide and is an extraordinarily hardy and adaptable species. While this plant can be found thriving in fresh, soft, acidic ditch waters, it is in brackish waters (especially shallow, silty, sheltered bays) that this attractive species really flourishes naturally.

It similarly likes alkaline conditions, or hard water, usually with a higher pH, so it is an excellent candidate for many African cichlid setups. While it’s safe for fish herbivores to eat, it contains compounds that make it taste bad and therefore isn’t very popular to eat.

Sago pondweed is the saltiest of the bunch, tolerating salinities of up to around half-strength seawater. And, this all-around tough-as-nails plant tolerates near-freezing temperatures to the hottest summer water temps.

Though only tolerant of mild salinity, C. wendtii is an old brackish aquarium favorite. Like the Anubias plant, Crypts usually are found naturally in swampy jungle streams.

While not too demanding, this common species does prefer a fertile substrate, such as Seachem Natural Flourite Substrate. It tolerates a broad range of lighting conditions and is happy at tropical or subtropical temperatures.

Though it might not look like much at first, it eventually can proliferate to make a nice underbrush over the tank bottom where eels, dragon gobies and other shy bottom dwellers will appreciate the cover.

Caring for Brackish Plants: A Primer

Once the plants are fully adjusted to the permanent salt level, the main goal is to maintain stability. This means that you must avoid the dramatic swings of salinity that come with inevitable cycles of evaporation and top-off (using pure freshwater to replace evaporated tank water).

Make sure to test the salinity of your brackish aquarium often using a quality hydrometer. The salinity should be constant to avoid shocking the plants. This includes avoiding rapid changes, whether they be increases or decreases.

Though their diversity and abundance may be modest, the visual impact of brackish water plants is huge. If there is a group of aquarium plants that exemplifies the maxim “less is more,” this is the one.

Kenneth Wingerter has worked in the aquarium industry for many years and is a diehard aquarium hobbyist. He’s written for a number of industry publications, including Tropical Fish Hobbyist, Coral, Advanced Aquarist and UltraMarine.