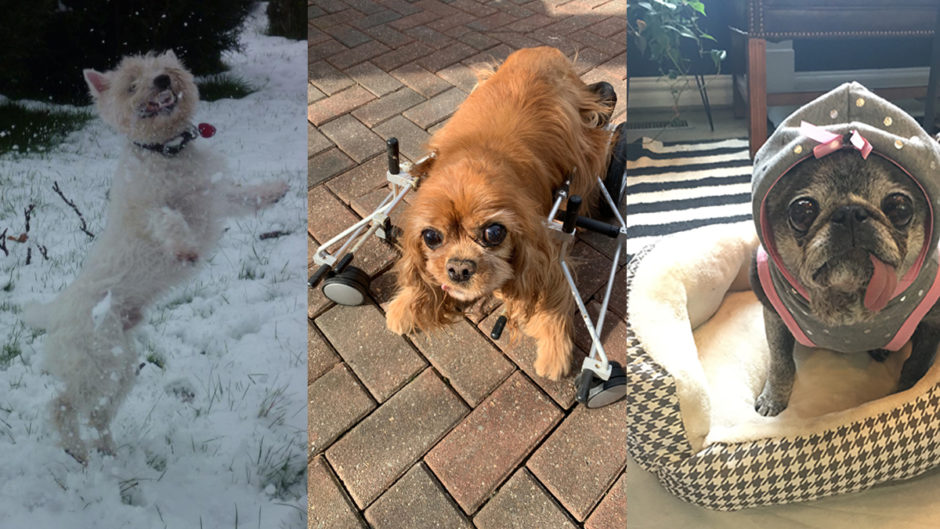 When it comes to living life to the max, these three senior dogs know how to do it right. Meet Clementine, Charlie and Angus—three pooches who prove that age is just a number. Even though they’ve encountered some challenges in their golden years, each has managed to overcome them with wagging tails.

Clementine is a 12-year-old Pug who lives life in fast lane—literally! This pup went from struggling to walk to running relay races.

In October 2007, Rachel Burns, who runs a content copywriting company in Chesapeake, Virginia, had been browsing pet adoption site Petfinder.com when Clementine’s profile popped up.

“She was at a small rescue out of South Carolina that is no longer in existence,” Burns says, adding that the pup was dropped off by someone claiming they found her on the side of the road. “Even though [Clementine] looked terrible and was seven hours away from us, I knew she was the right dog, immediately.”

At the time of adoption, Clementine had severe demodex mange, had lost all of her hair and was about 10 pounds underweight. She was in such terrible condition, Burns says, that she had nearly died from low blood cell counts. Shortly after Burns adopted her, however, Clementine improved.

At around 8 years old, Clementine started developing new health issues. First, her vision started declining. Clementine had a genetic defect where her eyes were not closing all the way, and they were getting damaged by the light.

“Her eyes are essentially too large for her head, and she [couldn’t] close her eyes all the way,” Burns explains. “This had caused damage to her eyes that slowly decreased her vision. It was too risky to put her under [anesthesia] for surgery, and the [vets] weren’t sure it would work anyways.”

As a result, Clementine developed double cataracts. Around the same time, Clementine started to limp and stumble a bit.

“We took her to a veterinary chiropractor who determined she had some sort of nerve damage that could not be reversed or repaired, just slowed through therapy,” Burns says. “She also was diagnosed with arthritis. As she lost some mobility and her eyesight at the same time, she would often fall—off couches, down steps—which caused more trauma to her back.”

Dealing with all these issues at once was hard, not only for Clementine but also for Burns, her husband and even their other Pug, Winston. Winston missed his playmate and couldn’t understand why Clementine couldn’t play, Burns says.

To help her deal with pain and discomfort, Clementine’s vet recommended two treatments: prescription meds Rimadyl and Tramadol for her arthritis, and a combination of daily steroid drops and a gel drop for her eyes to fight dryness.

“At her last appointment, they estimate she is 80-90 percent blind, but she can still see light and movement,” Burns says.

Other pet parents recommended CBD oil because they saw positive results in their pets from its use.

“We add a dose of CBD oil to her breakfast and dinner to help with her anxiety and pain,” Burns says.

Clementine also has her own wheelchair. Because the Burns family is active, often going on hiking, camping and other trips, they wanted Clementine to remain part of the action. So, they got her a wheelchair two years ago.

“We ordered her Walkin’ Wheels from Handicapped Pets,” Burns says. “It took her a while to get used to them, [but now] she now zips around the house when she’s in them. We even retrofitted a bike cart for toddlers so we can tow the Pugs behind us when we go for rides.

“Clementine’s life has not slowed down, even if her own mobility has,” Burns continues. “We bought a camper to be able to travel with our dogs, and we often camp and take her out onto the beach in her wheels, which she loves. In the summer, she spends time with us in the pool, and on a day-to-day basis she hangs out with me chasing down the best spot of sunlight in the house as well as the cat, which she is still somehow able to find.”

Clementine even has her own Instagram account, and she recently participated in the Wheeling Pug Relay USA.

“Through Instagram, I connected with so many other Pugs with mobility issues,” Burns says. “It’s a somewhat common issue for the breed. Over a year ago, we banded together to do a Wheeling Pug Relay USA team where our dogs ‘wheeled’ across the country, passing off the baton to each other, posting their little videos of them wheeling along—all to raise awareness and funds for pets with mobility issues.”

The money is donated to a nonprofit called High Rollers Club, which uses the funds to provide wheelchairs to dogs whose parents cannot afford them.

Charlie is an 18-year-old Cavalier King Charles Spaniel who doesn’t let health ailments keep him down. Despite vision loss and decreased mobility, this pup continues to reign over his household.

Charlie was a puppy mill breeding dog for the first eight years of his life, until he and four other dogs were surrendered at a veterinarian office in Missouri, says his mom, Judy Morgan, DVM, CVA, CVCP, CVFT. Eventually, Charlie was turned over to a Cavalier rescue group in Pennsylvania.

Dr. Morgan, owner of Clayton Veterinary Associates in Clayton, New Jersey, met Charlie after receiving a call from one of the staff from the rescue group. Charlie needed a home.

“We fell in love instantly, on February 20, 2008,” Dr. Morgan says. “He was already a crotchety old man with severe arthritis, syringomyelia and only five rotten teeth. He became a ‘foster failure;’ we fostered and adopted [him] because we couldn’t give him up.”

Because of the poor conditions in which he lived at the puppy mill, Charlie had several serious health issues when Dr. Morgan adopted him.

“He has been dealing with arthritis since adoption, and his mobility has declined over the years, [so] now he needs help getting up,” Dr. Morgan says.

While Charlie can’t get up on his own, once up he can walk around on surfaces that he can grip. He also uses two walkers for mobility-support, which help hold him up via a harness and two back wheels; one walker is for indoor use, and the other is for the outdoors. Dr. Morgan says she made the decision to get him a walker after witnessing her clients use them with success.

Because he has additional health issues, including a heart condition called mitral valve disease and a neurologic disorder, Charlie needs a lot of attention.

“He gets my husband up at least three to four times every night to get a drink of water and to go out to potty,” Dr. Morgan says. “That requires putting him in his walker and carrying him outside—so much fun in the snow and rain! Luckily, he and my husband have a special bond, and there are no complaints.”

Charlie’s conditions have required many adjustments over the years. He now takes what Dr. Morgan calls “a whole bunch of drugs and supplements.”

It’s that regular ongoing care, however, that has given him much of his quality of life back. Charlie gets cold laser therapy and acupuncture directly from Dr. Morgan.

“He’s on CBD oil for the pain, omega-3 fatty acids [or] fish oil for brain and joint health, a senior formula for brain function, medications for the heart and joint pain, and CoQ10 for his heart and brain,” Dr. Morgan says.

And while Charlie receives a lot of care and treatment, that doesn’t stop him from ruling the house.

“He still thinks he’s the boss of all the dogs—six in all—and, actually, he is,” Dr. Morgan says. “He growls at our 17-year-old Cocker Spaniel and chases him if he’s in his walker; they are pretty comical, and we liken them to the men in the movie ‘Grumpy Old Men.’”

Charlie also has his own stroller for when Dr. Morgan and her husband take the dogs for walks or camping.

“Charlie loves meal time and sleeps right in the middle of our bed, along with four other dogs and a couple of cats in a queen-size bed; my husband and I hang off the edges,” Dr. Morgan says, adding that she wouldn’t want it any other way. “This old guy is teaching us a lot about patience and senior care.”

Angus is a 14-year-old Westie proving that old dogs can be puppies at heart. He was about 7 months old when his mom, Sydney Masters, adopted him from the Humane Society of New York in 2005.

“We were not looking for another dog, really,” Masters says. “But my husband and I both help the humane society, and when we heard there was a [Westie] who needed to find [a] home, I thought it would be good for our older Westie, Ascar, to have a friend.”

Angus was surrendered to the humane society after falling from someone’s arms and breaking his growth plate.

“I had not even met Angus, just seen a photo, when he was whisked off to surgery by the shelter,” Masters says. “The first time I saw Angus was when I picked him up from the hospital.”

The lucky pup did well for the next decade, splitting his time between New York and the Loire Valley in France, where Masters and her husband own a second home. Then in 2016, Angus mysteriously tore his ACL and meniscus and once again needed surgery to insert an artificial ACL.

It was at this time when Angus began showing signs of arthritis, which seriously impacted his quality of life.

“There was a point when Angus couldn’t jump up the one step to get into the house or on the couch,” Masters says. “He was miserable and really looked like an old dog.”

Even after healing from his ACL surgery, Angus still had trouble moving around because of the arthritis.

“He’s always been active, and he didn’t want to even get off the couch, let alone go for walks or run around,” Masters says. “He was in pain, and I know from personal experience, quality of life goes out the window then.”

Masters tried joint supplements, but they seemed to do little, so his vet recommended Osteo TruBenefits, a nutraceutical containing Perna canaliculus, a New Zealand-sourced green-lipped mussel. Little by little, Masters noticed the nutraceutical was working.

“We saw a small difference in a month and a big difference by the second month,” she says. “He’s been on this now for three years and is thriving.”

For the past six months, Angus has been taking fish oil and bacon-flavored CBD oil drops, which his mom says helps with mobility as well as stress when traveling, something he developed recently after years of flying with no issues.

“He seems to be less stressed and shaking when we headed to France this time,” Masters says. “He [loves his drops], and his coat is shining—he looks great.”

While the 14-year-old might not be running like he did when he was 6 or 7, Masters says he plays with his toys like a puppy, can run and jump, and loves to take long walks and play in the water.

“He chases his tail when he’s really happy, like when we have guests or when we go new places,” Masters says. “He loves sniffing around the garden, guarding the yard and watching out for the neighbor’s cat, who he loves to chase.”

Even when health issues creep in, a little extra love and care go a long way to help seniors get their bouncy energy back, and these three elderly pooches are proof of that. Senior dogs are never too old for new adventures, even if it means taking a little longer for them to get where the adventure is.