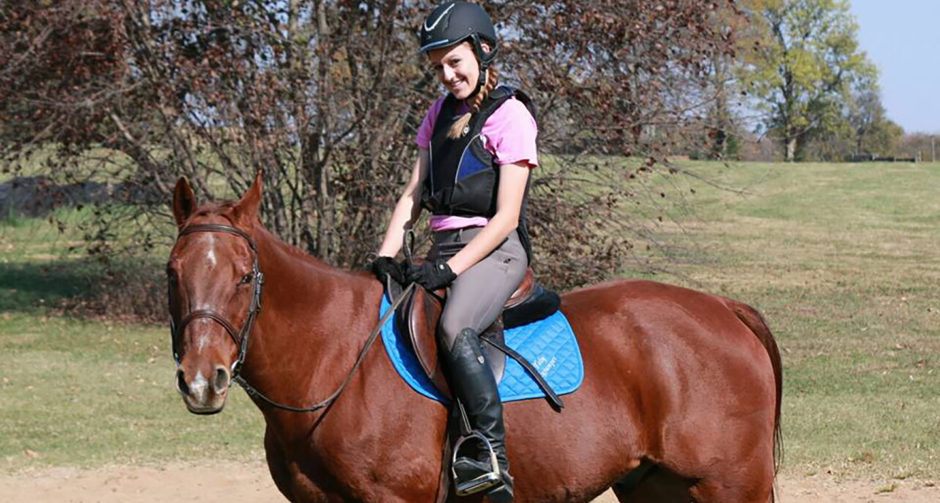 It’s easy to be fond of your horse during his prime as he logs reliable miles on the trail or brings home blue ribbons. But what happens when your horse no longer is able to keep up with his old job, and it’s time for your horse to retire?

Many horse owners have discovered that their horse’s golden years provide an even sweeter time to build a bond with an equine who has been in their life for a long time. We chatted with three owners of retired old horses to learn what makes these aged equines extra special and what they’re up to today. These sweet stories bring to light a new dimension to the relationship between a horse and his person.

Retired eventer Toby lives on a farm in Georgetown, Kentucky with his owner, Nikki Kowalski. Kowalski got the 27-year-old American Quarter Horse when she lived in Michigan when he was 4 and she was 14.

“We bought him at a local Michigan horse auction for $900,” Kowalski says. “He was green broke [meaning he had just learned to accept a rider on his back], and we learned how to event together.”

Eventing is essentially a triathlon of horse sports where horse-and-rider teams perform a dressage test, a cross-country jumping course and a show jumping course during competition.

“Even though we were winning, people told me to sell him and get myself a ‘real’ horse,” Kowalski remembers.

“We started with the easiest Prelim in Michigan and eventually did all of them,” Kowalski says.

The pair even won first place at Richland, which is considered the most difficult event in the region.

“He used to have a fan club that called him ‘The Little Horse that Could’ because he’s barely 15 hands [60 inches],” she adds.

When she bought a young Thoroughbred to be her next eventer, Kowalski loaned Toby to a friend who used him to get her “A” Pony Club rating in 2005, which is the highest riding certification rating offered by the United States Pony Club. It’s considered a very difficult rating to achieve and requires rigorous study and riding requirements.

“She started taking lessons on him after we moved to Kentucky,” Kowalski says. “They cross-country schooled [practiced cross-country jumps outside of a competition setting] here and in Aiken, South Carolina, and did a few schooling shows.”

In 2017, Toby lost sight in his right eye to uveitis, and he’s developed some arthritis in his knees, so they don’t ask too much of him these days, Kowalski says.

“My mother still rides him around the farm, and he gives pony rides to kids occasionally, but we try to be careful about how much we let him do,” she says. “He’s still perky and willing to gallop across the field if we let him.”

26-Year-Old CB Enjoys a Life of Luxury After Retirement

Dalton, who lives in Arcata, California, has been riding since she was in fourth grade, participating in both English and western horse shows. She first met CB at competitions with his previous owners. He competed in barrel races, which is a western competition where you ride a pattern around three barrels and the fastest time wins, and gymkhanas, a western competition composed of different timed games and speed patterns.

“I’d always had my eye on him,” Dalton says, adding that his owners eventually gave him to her because she was friends with them and they trusted her with him. “I, of course, liked fast horses, but I really just thought he was cool. And he is!”

CB was fast, for sure, but he also had his challenges.

“He is the sweetest horse in the world from the ground, but once you are on him, he only wants to run,” she says. “He retired because even though he was fast, I knew that his hocks were hurting, and he needed a quieter life.”

“He enjoys chest scratches and carrots,” she said. “I love knowing he is safe, healthy and happy.”

Keelari Mauzi is a horse trainer in San Diego, California, who focuses on jumpers and eventing. She found Amaretto more than a decade ago after he retired from racing with just two wins in 18 starts. When she found him, Amaretto was retraining at a barn that trains horses for jumpers and hunters—two types of jumping in an arena with a slightly different focus.

“I was a freshman in high school, and he was 9; it really was love at first sight,” Mauzi says. “I knew instantly before riding that he was the horse for me.”

When she took Amaretto home, he gradually adjusted to his new life.

“He was badly abused and not all mentally there when I got him,” Mauzi says. “It took me a year and a half to get him to trust a person again. The first couple years were rough for both of us. We learned a lot together in Pony Club,” and she earned her “B” Pony Club rating with him.

Over the years, they tried several types of horse competitions, including dressage, gymkhana and fox hunting, before settling on eventing, as they both loved going cross-country. They competed extensively at Training level in eventing.

Amaretto retired from jumping and competition in 2018 after reinjuring an old bone chip injury from his racing days when he got cast in his stall.

“He’s sound for light riding at the moment, but we are still taking his rehab slowly,” Mauzi says. “My vet and I agreed that it is in his best interest not to jump anymore. After healing, we don’t want to risk a third reinjury.”

Amaretto, now 21, is living life to the fullest these days, and Mauzi sees and cares for him every day.

“Being in Southern California means that there is limited space for turnout and virtually no green pastures,” she says. “I’ve chosen to keep him at the same boarding facility that he’s been at for 12 years … and because he has trust issues, I’m responsible for 90 percent of his daily care, which I honestly don’t mind; it’s just another excuse to spend time with my best friend!”

His days are filled with fun, food and friends.

“The best routine we’ve found is to keep him entertained, keep weight on him and give him a big corral—by California standards,” she adds. “He gets daily exercise—either hand-walking, turn out up in the arenas, hand grazing, trail riding or a light hack—and has a Miniature Horse neighbor to hang out with and socialize with.”

No matter what part of the country you live in, keeping your older horse in your care can mentally and physically benefit both of you. Even without a horse pasture to retire in, old horses thrive on a sense of routine, the herd members they know and a caretaker they can trust. And you just might find your bond with your horse becomes even stronger once he reaches his golden years, since you have more time to relax and enjoy each other’s company.

Holly Caccamise has an M.S. in Animal Science with a specialization in equine nutrition. She is the managing editor of Horse Illustrated magazine.