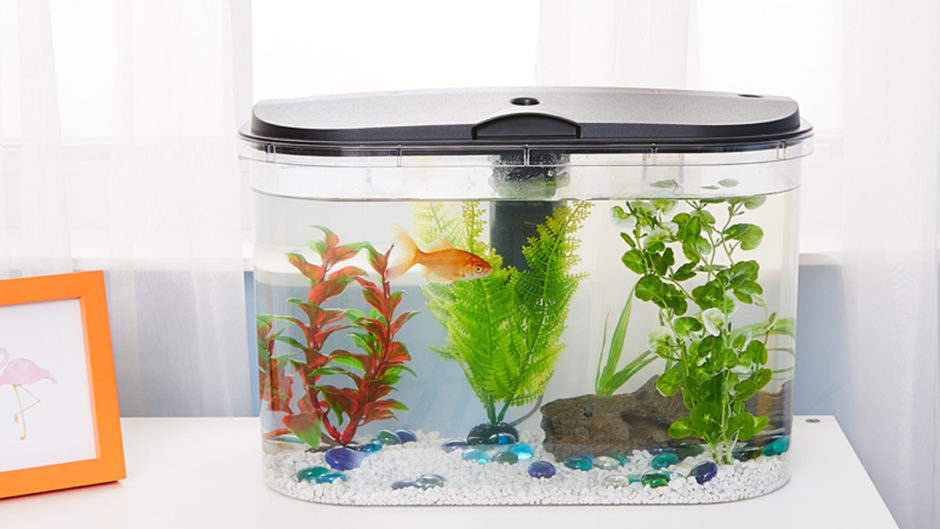 From a feature in The Cat in the Hat to carnival prizes, a small yellow fish in a round bowl seems like the staple starter pet. And yet, surprisingly, much of what we think we know about Goldfish care barely scratches the surface! “Goldfish are often unfairly considered to be simple pets to look after, which often leads to neglect and pet owners not giving them the attention required,” says Sam Williamson, a former marine biologist and fish expert of more than 20 years.

Yet, administering proper goldfish care and feeding goldfish isn’t all that difficult. Here are three common mistakes that new fish parents make—and how to avoid them.

Shaking fish flakes (think TetraFin Flakes Goldfish Food) into a bowl once or twice a day seems like the bare minimum requirement for feeding Goldfish. And while you should be stocking up on fish food, most people are in danger of being a little too generous while feeding Goldfish and are actually overfeeding—a common cause of death in Goldfish! If you are wondering, “What do goldfish eat?” try API Optimal Protein Flakes Goldfish Food, or Omega One Medium Sinking Goldfish Pellets Fish Food.

According to Williamson, it is very hard to tell if a fish has been overfed by simply looking at it. One sign of overfeeding is finding uneaten food in the fishbowl. On the other hand, an underfed fish will generally be lethargic and might even be found scrambling around the gravel, looking for food flakes,” says Williamson. Try feeding Goldfish twice a day. Though fish flakes are convenient (and cheap), Williamson suggests trying moist food instead, as it is easier to measure. Gel food, like , is a good option.

Your fish will also enjoy nibbling on leafy vegetables—but as with regular food, you must ensure that you don’t put too much into the tank. “Goldfish are greedy and will literally eat themselves to death,” warns Williamson. He advises that you establish a feeding schedule early on—and stick to it!

Mistake 2: Getting a Too-Small Tank

Most Goldfish novices make the mistake of thinking since the fish is small, the tank should be small, too. But, who isn’t fond of a little elbow room? Keep in mind that goldfish can grow to be 5-8 inches in a tank, but in a pond they can grow up to 10 inches. Yes, you read that correctly: almost a foot long!

When purchasing your fish’s new home, find a tank that’ll allow him to grow comfortably. Williamson suggests a 10-gallon tank right off the bat, adding 10 extra gallons for each additional fish (we recommend the 20-gallon Marina LED Aquarium Kit). If you balk at the size, know that larger tanks require fewer water changes and cleanings, since water in a small tank becomes dirty at a faster rate.

A good rule-of-thumb of Goldfish care is to establish how many fish you’re going to get from the beginning, and then purchase a tank to accommodate that number. Goldfish will happily live with other Goldfish, but they can be bullied by larger fish. So if you’re an aquarium newbie, stick with one species of fish to be safe.

While Goldfish care requires no walks or litter box scooping, a huge mistake pet parents make is taking that to mean they should spend zero time with their new fish friend. Any pet requires  effort—so be prepared to put in the time to help your Goldfish flourish. Overall, Williamson recommends setting aside around 20 minutes per day to spend with your Goldfish.

Expect weekly tank cleanings and water changes (as noted above, the frequency will depend on the tank). Not doing so will cause a buildup of ammonia, nitrates and nitrites in the tank—all of which can be deadly for your fish. To slow down nasty buildup, pick up a fish tank filter (Tetra Whisper Internal Power Filter with BioScrubber) and a water conditioner (API Stress Coat Aquarium Water Conditioner) when you’re shopping for your tank. The conditioner will make tap water instantly safe for your fish by removing things like chlorine and heavy metals. Alternatively, you can let your tap water sit for a day before adding it to the tank.

Once your new fish is home, make sure that they are comfortable in their environment. That means no dumping him from the to-go bag straight into the tank. Going into water that is colder or warmer than your fish’s current environment will make him go into shock. Instead, “float” the bag in your tank so that the water inside will gradually match the temperature of his new abode.

And lastly, enjoy! Goldfish have been great pets for over a thousand years. Aside from fish being beautiful to watch and offering (silent) companionship, keeping an aquarium is scientifically proven to have mental health benefits, like anxiety reduction. That’s quite the perk for such a small pet!

Elina Bolokhova is an award-winning lifestyle writer who has been featured in a variety of digital and print publications, including CNN, AOL, Parenting Magazine and Family Fun. She lives in surprising harmony with her husband, four rescue cats and an Albino Ringneck dove. In her spare time she brings injured pigeons to the local wildlife rehabilitation clinic and is constantly vacuuming cat fur.