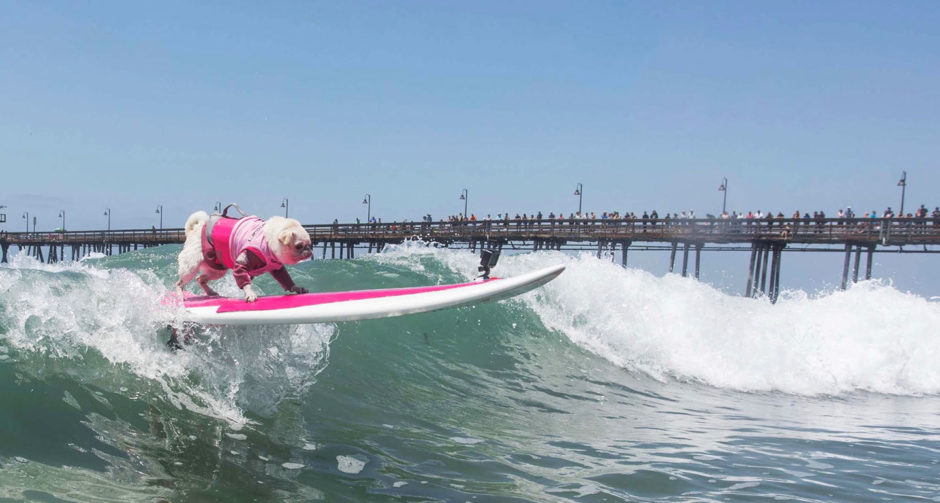 When you think of canine athletes, training and skill probably come to mind. But some take dog sports to the next level and just might change your perception of what you thought was possible. From big pups jumping to new heights to a brave Pug hitting the waves, these canine athletes demonstrate just how far talented dogs can go.

Agility is a game where younger dogs often excel, but 8-year-old Fame(US) (pronounced famous) is not letting a little thing like age stop her. Fame(US) lives with dog trainer Jessica Ajoux just outside of Wyncote, Pennsylvania. Ajoux got her from a performance Border Collie breeder in New Jersey in July 2010.

“I started training Fame(US) in agility as soon as she came home,” Ajoux says.

Agility is a dog sporting competition that takes pups through a pre-set obstacle course consisting of jumps, walkways and tunnels. Only the fastest dogs take home the gold.

From the moment they started agility training together, Ajoux says she recognized that Fame(US) was a natural; and boy, was Ajoux right. It didn’t take long until Fame(US) started competing. In fact, her first competition was when she was 18 months old.

“Her first big finish was only a few months after she started competing,” Ajoux says. “She placed second at the New England Regionals for the United States Dog Agility Association (USDAA). It was a nice moment because she took second place to my other dog, Pirate, who was peaking in her career at that time.”

Fame(US), who also goes by Fame, has continued to win or place in almost every major U.S. agility tournament she competes in. She has placed in over 30 tournaments to this day, according to Ajoux.

“Fame(US) ran a 20-obstacle course in under 30 seconds,” Ajoux says. “She was 1.5 seconds faster that the second-place dog, which is a very large spread in agility.”

Even as a relatively “older” dog in the sport now, Fame shows no signs of slowing down.

“She is one of the most athletically talented dogs I have ever met or worked with,” Ajoux says.

Gidget is a 6-year-old Pug who loves to surf. She’s a natural on the water and is best known for her 360 turns, riding backwards and sideways, and for outsurfing dogs much larger than her when given the opportunity, says Alecia Nelson, Gidget’s parent and surf buddy.

“Most Pugs are known to sink or not like water, but this Pug loves the water,” Nelson says. “Gidget recently rode nearly a minute long, 4-foot open-face wave at 55 seconds. This is the second time she has ridden a long wave [like that], and, at the moment, there is no record of a 15-pound dog attempting that scale, [so] we may be looking at [breaking] a new world record.”

Before Nelson realized Gidget was meant to surf, she thought dog agility would be their thing when she when she brought the Pug home in 2012.

“I wanted a dog I could compete in dog sports with, so I ended up training Gidget in dog agility for two straight years,” she says.

But when Nelson moved from Maine to Malibu, California, in August 2014, she figured she’d try putting Gidget on a surfboard to see what would happen.

“Her balance and turns were amazing,” Nelson says. “So in 2015, I decided to try a surf competition out of curiosity. She ended up winning a medal. The rest is history, as Gidget has placed every year since and has competed in the Purina Incredible Dog Challenge (Dog Olympics) for three straight years.”

Gidget currently has 13 wins under her paws, but perhaps the biggest one is winning first place in the World Dog Surfing Championship 2018.

“At the World Dog Surfing Championships 2018, the conditions were unbelievable, with water temps in the 50s, rip currents where I was being dragged down the beach and most dogs were falling off their boards,” Nelson says.

The fact that this little Pug stayed on her board “blew us away,” Nelson says. “Gidget is currently the only small Top Dog winner to beat all small, medium and large dogs in a surfing event in California.”

Gidget’s achievements are even more impressive considering she has a rare disease called idiopathic pancreatic acinar atrophy, which causes the pancreas to stop producing adequate enzymes that aid in digestion. But Gidget proves to everyone who watches her that she’s not letting the condition get in the way.

“Every time I take her to the beach or a dog agility course, she screams,” Nelson says. “Seriously, I can’t get her there fast enough, and she races for the beach. The day she decides not to jump on that board, I will retire her.”

Dock diving dogs are perhaps some of the most extreme canines out there. In dock diving, pups jump from a dock directly into the water. They are judged on how far and how high they can reach before splashing into the water.

Rachael Brinkman of Einstein Dog Training in Fenton, Michigan, is no stranger to the wonders of dog sports. But even she wasn’t prepared for how amazing her own Whippet dog Slingshot would be.

“I actually bred Slingshot [and didn’t] intend to keep a puppy from that litter,” Brinkman says. “After seeing just how special he was, I knew I couldn’t let him go. I had a 6-month-old baby and a 2-year-old toddler, so what big deal was it to keep a puppy?”

The 4-year-old Whippet is a champion now, but Brinkman says it took him a while to build his confidence to jump off a dock.

“By the end of his second season, we had a personal best of 28 feet, but his confidence wasn’t always there,” she says. “Sometimes he would run to the end of the dock and decide not to jump.”

He was 2 years old when he started competing with dock diving dogs in 2016, and Slingshot hit his first world record in 2018.

“Slingshot hit his first world record in July 2018 at the Farmington Fido Fest in Farmington Hills, Michigan, where he jumped 31 feet, 2 inches,” Brinkman says. “It was 2 inches farther than the previously held world record of 31 feet, which was standing since 2012.

“In fact, Slingshot set 12 world records in the 2018 season in multiple organizations on multiple event weekends,” she continues. “He had the farthest jump of any dog at the DockDogs World Championships and went into finals as the top-seeded finalist.”

From world records to championship after championship, these canine athletes prove that you can do anything you set your mind to!

Want to get outdoors with your pet and try something fun? Check out: