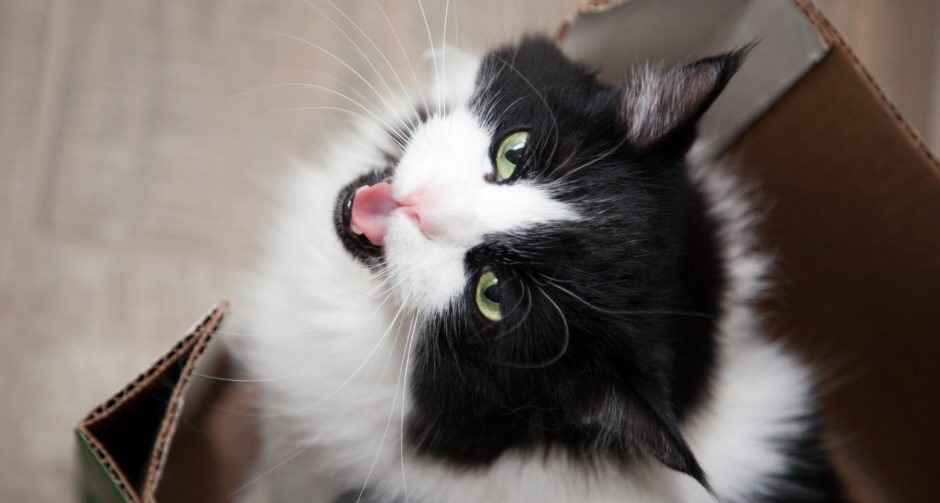 In 1944, New York psychologist and cat lover Mildred Moelk showed that cats meow differently to people than to fellow cats to get human attention. She categorized 16 sounds used in cat-human and cat-cat communication, which remains the basic guide for understanding feline vocalizations.

In her paper “Vocalizing In the House Cat: A Phonetic And Functional Study” in the April 1944 “Journal of Comparative Psychology,” Moelk organized vocalizations into three patterns based on how cats formed the sounds and believed they most often expressed, loosely translated: “hello,” “pay attention to me,” “give me,” “please give me,” and “I like” or “I don’t like” whatever was happening to them in the following way:

Moelk described these vocal patterns and subcategories in adult cats. To pronounce them, use the partial phonetics based on Moelk’s more complex system. An apostrophe (’) means an emphasis, most often from inhalation, and a colon (:) depicts a prolonged sound.

What Does Meow and Other Cat Sounds Mean?

Although emphasizing that these sounds are not words, Moelk said cats routinely change these to communicate their goals, desires and emotions:

“A complaint with heavy stress on the initial vowel is a scolding cry,” she wrote, but a call with a prolonged final vowel indicates “some more vaguely formed complaint.” If the cat fails to achieve her goal, Moelk said, “the raising of the prolonged final vowel [shows] bewilderment.” Calls “may vary in tone from soft coaxing to imperative command.”

Seventy years later, experts agree that cats are communicating something to us, although what is unclear. The most widely-held theory, developed over a decade ago by Michael J. Owren, PhD, is that cats use vocalization to influence or manipulate humans, not to deliver specific information.

“Cats produce meows to get attention and rely on the owner to infer what the cat wants,” explained Owren, a psychologist and professor who studied animal vocalizations until his death in January 2014. (Owren discussed feline vocalizations with me in a 2008 interview.)

“A person can pretty readily figure out what’s going on from the cat’s body posture — whether staring or other behaviors — so the cat doesn’t need to have a particular acoustic meow” for each situation, Owren said. “This is communication because it is using a non-linguistic signal to affect the behavior of others. The human response gets the cat what it’s seeking,” although it’s unknown whether the cat plans for specific reactions.

Loud, repetitive meows resemble general distress cries and do not convey emotions, Owren believed. “Cats are not producing distinct sounds that stand for individual emotions, but these sounds are triggered by the cat’s level of arousal. Like a child’s cries, it’s crude and sometimes counter-productive. It depends on the parent having an inherent level of caring,” he said.

Cats succeed with their vocalizations, whether the sounds are pleasant or unpleasant, Owren added. When cats purr, “which is very appealing to humans, [cats] want the humans to continue doing whatever they’re doing. When cats get excited, their loud meows are so annoying that people will do whatever they think the cat wants,” just to stop the noise.

And that’s pretty smart, when you think about it.