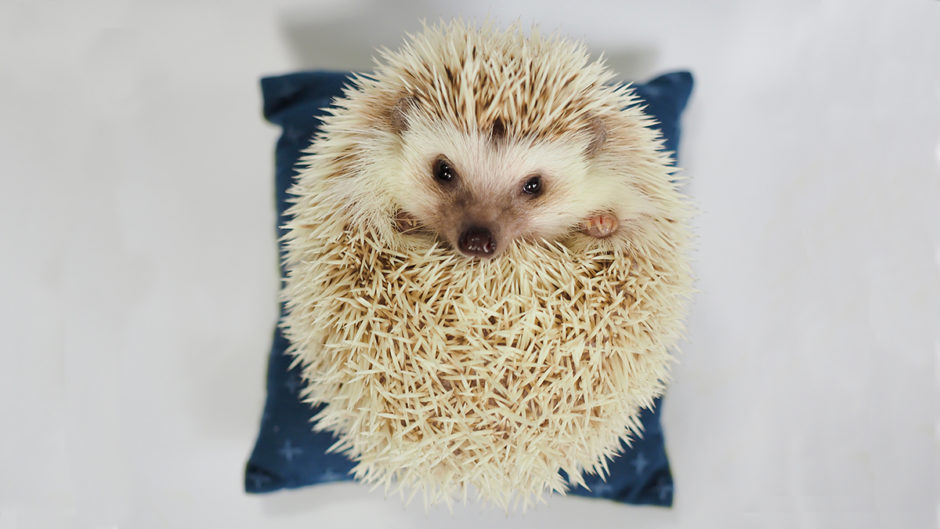 Quick … can you think of a small mammal pet that you have to pet just the right way or you might have to reach for a bandage? (And no, it has nothing to do with a big, bad bite!) If you said hedgehog, you are correct. This cute little critter’s most prominent feature is his quills — which, for the record, are not poisonous nor will they come off and stick in you like those belonging to a porcupine. The hedgehog is certainly an interesting looking pet companion, and it also has some interesting behaviors.

A hedgehog’s quills do come off under certain circumstances. Much like we lose our baby teeth, young hedgehogs shed their baby quills, which are replaced with adult ones. Also, beware that young hedgehogs tend to be grumpy while molting their quills, so be extra careful and extra gentle when handling your young hedge. And similar to the notion of people losing hair when under extreme stress or when ill, adult hedgehogs can lose quills under similar circumstances.

Hedgehogs put a new spin on the common phrase, “Stop, drop and roll.” Their defense stance takes the form of rolling their bodies into a tight ball when they perceive a threat, whether real or imagined. This posture points their quills outward, thereby making them more effective in warding off whoever or whatever is intruding on their space. This can very well be considered a last stance, as a hedgehog might try fleeing first before balling up.

In the wild, hedgehogs seek the cover of rocks and bushes or dig themselves a nice little shelter in the ground. In the home environment, your hedgehog will appreciate a digging area, such as a box filled with a diggable material like strips of newspaper or fleece. You can make it even more enticing by dropping in a few mealworm snacks for him to forage for.

A hedgehog’s go-to vocal is huffing and puffing, but he’s not trying to blow the house down. This sniffing is a normal vocalization he makes while going about his business of exploring. An unhappy hedgehog, on the other hand, will show his disdain with a hiss or a clicking sound. Throw in a quick lunging motion, and you are witnessing one really upset hedgehog.

Hedgehogs are naturally nocturnal, so they tend to be sleepy during the day and active in the evening hours. Respect your hedgehog’s sleeping hours, otherwise he might reprimand you with the clicking and lunging behavior described above.

Hedgehogs tend to be solitary animals and typically don’t like to share their space with other hedgehogs, and males especially are prone to fighting. Some hedgehog enthusiasts report that two females stand a better chance of getting along, but fights among the girls can also break out. Be very careful of any interactions between unaltered males and females, even during play, as they are not seasonal breeders and you might end up having to deal with an unplanned pregnancy.

Unlike many other small mammal companions, hedgehogs find bugs especially tasty. While technically classified as omnivores, eating both plants and animals in the wild, hedgehogs also feed on insects like mealworms and crickets. As part of their main diet, some owners feed their pet hedgehogs cat food, and there are also commercial hedgehog diets available.

Here’s a behavior you won’t likely see in other family pets: a hedgehog that finds a particularly exciting new scent will lick at it until he develops what is best described as a scented froth in his mouth. He then applies this froth to his quills with his tongue, thereby “anointing” himself with the newly acquired scent.

9. Watch Out For Hibernation

Many species of wild hedgehogs are said to hibernate. However, a pet hedgehog’s environmental temperature should be monitored to avoid inducing hibernation behavior. A temperature below 68 degrees Fahrenheit is said to be enough to send a hedgehog into hibernation mode, which can present as wobbly walking and a lessened appetite. Hibernation can cause pneumonia or other health issues for a pet hedgehog, so keep his room temperature between 72 and 80 degrees Fahrenheit.

Hedgehogs tend to have a habit of sticking their heads into tubes like toilet paper rolls and containers like yogurt cups, and getting them stuck on their heads. In fact, in 2006, McDonald’s in the United Kingdom ended up developing a hedgehog-friendly design with a smaller opening for its McFlurry dessert after numerous reports of garden hedgehogs finding discarded cups and getting their heads stuck while licking the containers clean. Some pet hedgehog enthusiasts report that their pets seem to enjoy frolicking around with a tube or container on their noggin, but this should be part of supervised play. And cutting a slit along the length of the tube offers a way for the hedgehog to free himself.

Hedgehogs are incredibly buoyant — witness for yourself by checking out one of the many YouTube videos of hedgehogs floating effortlessly on their backs like an overly inflated raft. Most tend to enjoy bath time in a sink or large washbowl, and, while they can float and swim, you still need to supervise them during bath time.

Hedgehogs are said to have some natural immunity to against snake venom. Chalk it up to a protein called erinacin that is present in the animal’s muscular system and offers antihaemorrhagic properties. (That’s not to say that your hedgehog, can take on an especially lethal snake like a viper or black mamba!)

Want to read more? Check out: