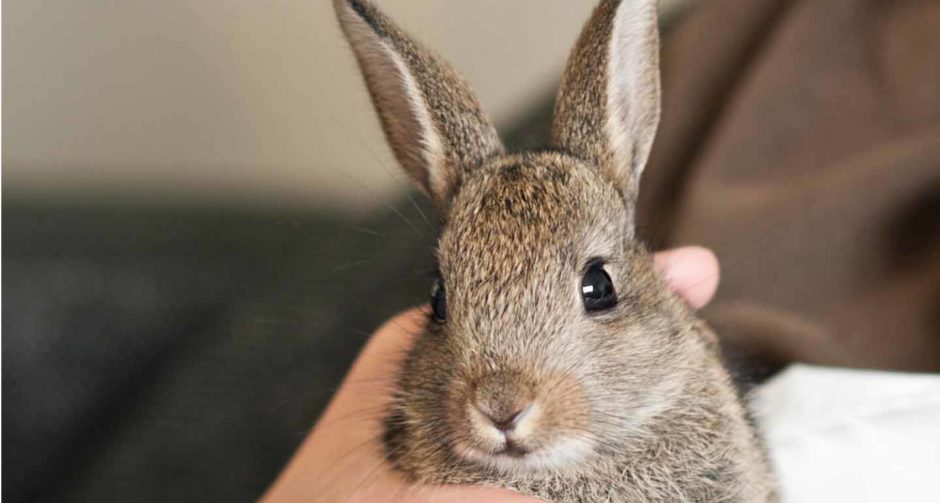 With their long ears, soft fur and fuzzy tails, rabbits can certainly be cute and cuddly. Cuteness aside, rabbits also have some peculiar and perplexing habits. Below is a rundown of common rabbit behaviors and what they mean.

When you introduce your rabbit to a new area of the home or let him have the run of a room, don’t be surprised to see him rub his chin against furniture and whatever other objects he comes across, including you! This is your rabbit’s way of saying, “Dibs!” Rabbits have a gland under the chin that leaves a scent on whatever the rabbit rubs his chin against. You won’t be able to smell this marking behavior; other rabbits can detect the scent but not people.

2. Running About In A Tizzy

Rabbits like things just the way they left them. Rabbits are prey animals, so memorizing the layout of the environment — especially any potential escape routes — is a hardwired, natural instinct. Don’t be surprised to see your rabbit run about the room and retrace his route if you’ve changed the layout he is used to, such as after you have moved furniture or added a new chair.

Rabbits eat a small bit of their poop. It might sound gross, but rabbits do this for a legit health benefit. The poop they consume is called “cecotropes,” which is different from the rabbit’s regular poop in that it is softer and full of nutrients the rabbit needs. It is also referred to as “night feces,” because rabbits ingest them typically during the early morning hours. The rabbit is essentially re-digesting his rabbit food in order to absorb the vital vitamins and minerals missed during the first go-around through the digestive tract.

Rabbits keep their fur and paws clean by licking themselves frequently throughout the day, much like cats. Rabbits generally don’t need to be bathed, but they do need regular brushing to minimize the amount of hair they ingest during grooming. One of the cutest grooming postures a bunny will do is sit up, lick and then fling his paws out karate-style and rub them against his face.

Two bonded rabbits will show affection by grooming each other. Your rabbit might show his affection for you in a similar way, by licking you! A rabbit might also lick you to let you know he wants to be petted.

A relaxed, happy rabbit might grind his teeth gently together almost rhythmically. This is audible if you are in close proximity or petting your rabbit. Loud teeth crunching, however, can be a sign that your rabbit is in pain, and this is often accompanied by tense body language (e.g. hunched with ears held tight against her body).

When a rabbit is not happy with something you did or with something in his environment, he might express his displeasure with a loud “thump,” which is accomplished by smacking his hind foot hard against the ground. You might hear a “thump” when you put him back in his pen when he was happily free roaming around a room. The “thump” is often followed by the rabbit hopping away and turning his back to you — the ultimate bunny diss!

You will know that your rabbit likes where he is if he starts dropping a little trail of fecal rabbit pellets behind him as he hops about. He might be fully litter-trained, but he’s choosing to go outside the box to claim his newfound territory.

A playful bunny sometimes takes off running, jumps up in the air and clicks his heels together, which is also referred to as a “boink” or binky. A boinking bunny is happy and in a playful mood.

Rabbits sometimes toss items about. These can include rabbit toys, their litter box or their food dishes. Tossing can be a sign of wanting to play or, in the case of a tossed rabbit food bowl, a way to get your attention. The bunny is saying, “Feed me!”