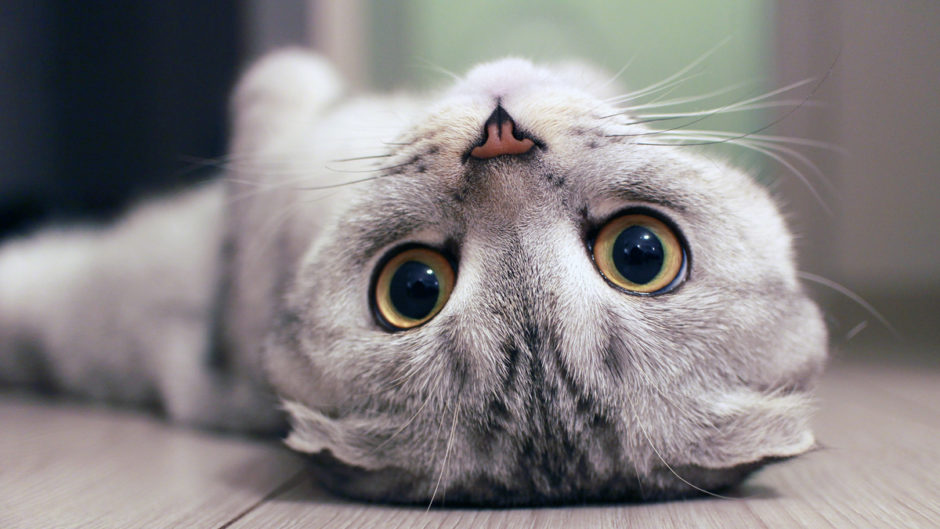 Seems like at least once a week, someone in an article or on Facebook tries to goad us to choose between dogs and cats. “Which do you like better?” or “Are you a dog person or a cat person?” Well, I like both. And I say “Vive la difference!”

Let’s celebrate the differences between dogs and cats and enjoy them. Neither is better. But I will have to agree there are some feline behaviors that can seem very strange to those who don’t live with cats.

Cats are very unique creatures. Some of the odd body language, quirky behavior and strange habits they have contribute to the strong feelings people have toward them. But comparing their behavior to dog behavior is about as useful as comparing a cumquat to a bicycle. Yeah.

Behaviors can be inherited from ancestors and may no longer have an important bearing on day-to-day existence. Since domestication has been a relatively recent development for cats, some things cats once did to survive may have no adaptive value now that they are adored members of the modern-day household. Make no mistake, though, cats are no different than dogs or humans or most other species when it comes to behavior. There is or was a pay-off for them somewhere in the things they do, or they wouldn’t bother to do them. So what motivates the traits we find odd in our cats?

Here is a list of 11 odd cat behaviors and what they actually mean.

What does it mean when your cat approaches you and rubs her face from nose to ear on your leg, arm or face? It means she likes you, and is pleased to see you.

Cats have scent glands in their faces. When they rub against you, it is an act of greeting and co-mingling scents with you. If you think about it, it is a bit like the European greeting of kissing three times, alternating cheeks each time.

If you want to meet a cat and make a good impression, hold a relaxed finger within a few inches of her nose. If she comes forward to sniff and rubs against your finger, you can test her willingness to engage further by rubbing the cheek and neck area gently. Faces are the most polite place to rub a cat. Many cats do not want to be rubbed in other places until they get to know you better.

Head butting is an over-the-top version of face rubbing. If the cat knows you already, or is just really enthusiastic about people, he may not wait for a polite greeting. Kind of like that friend of yours who skips handshakes and goes in for a hug when she meets a new person, some cats head straight for a snuggling relationship by butting and twisting their heads against you, encouraging you to pat and stroke them.

Where people get the idea that all cats are aloof, I do not know. I know kitties who would make Justin Bieber groupies look shy. Use a little restraint in rushing right in to serious snuggling, though — you could become a victim of the next odd behavior.

Some cats regulate their excitement quite well. We all joke about the coolness of some kitty personalities. But others who are young or have less experience in meeting humans will become aroused by the petting interaction so quickly that they seemingly find themselves “in over their heads.”

Many cats enjoy petting until the stimulation is too much for them–especially around the base of the tail. This can change quite quickly and, once they pass that point, they move to cut off the interaction with a swat or a bite. Others are still enjoying the interaction, but the arousal leads to “play nipping” or “love bites”–gentle (and sometimes not so gentle) biting of nearby hands and fingers. This is likely a response to the excitement that comes with hunting or playing–or maybe mating. The bite would be a natural progression of one of those cat interactions.

As mentioned, the switch from kitty interest to kitty annoyance can happen quickly. So how might you catch that switch early enough to back off? One thing to look for is the twitching tail.

The tail may belong to a cat who appears to be comfortable and cat-napping. The tail of a relaxed cat might perform a slow, luxurious swaying. But if you see the tail speed up and begin moving in a twitchy way, take note! That tail is the outlet for something that is starting to get on his nerves. It may be followed by ears moving to the side or back, and sudden exits.

One of my very favorite happy cat behaviors is kneading or “making bread.” This behavior is a leftover from the cat’s days of nursing on mom.

Using their paws to manipulate the mammary glands stimulates the production of milk. It may also be a calming or enjoyable repetitive behavior that makes your cat feel relaxed or sleepy.

As a surrogate mother to our house cats, we may ourselves be the object of kneading. Lap cats will often knead as they climb up for some attention, which can provide an excellent reminder that it is time to trim the cat’s nails! And remember I mentioned that face rubbing involves scent-marking you? It is likely that kneading does, too, since a cat has scent glands in its paws as well. Many cats show at least some kneading behavior throughout their lives, but some take it to a real art form–pawing, purring, and drooling combined.

Speaking of purring… This is a most-recognizable cat behavior, and many folks would not categorize it as strange behavior.

Kittens begin to purr at 2 days old! However, it is a very unique vocalization among domesticated animals, and it has taken years of research to find out how a cat does it! Something in the cat’s brain triggers the cat’s larynx to vibrate between 25 and 150 times per second. Fewer vibrations of the vocal chords per second create a lower purr, while faster vibrations raise the pitch. Interestingly, the purr resonates both when air is expelled, and when the cat breathes in, adding to the variation in sound.

Most of us think of cats purring when they are happy or contented. In fact, cats also purr at times of fear, stress and pain. It is possible the act of purring when less than happy is a bit like humans whistling in the dark. Cats may be attempting to self-soothe with an act that is usually associated with a happier time.

7. Staring With Their Mouths Open

Have you ever seen your cat gaping with his mouth partly open, looking a bit like he has smelled something bad? It might also be described as grimacing or appearing to pant. He is probably showing what is called a “Flehmen response,” sometimes shortened to “flehming.”

The term comes from a German word referring to curling of the lips. The cat opens his mouth to allow scent to reach the vomeronasal organ (called the Jacobsen Organ) in the roof of his mouth. That organ provides more information about certain scents than smelling them through the nasal passages alone. The resulting facial expression could also have you thinking your cat is chuckling about something! And who can say that isn’t true?

Want to know how to “catch a cat”? Just put out a small box on the floor. Cats of all types are drawn to cozy enclosures; even lions and cheetahs appear to enjoy squeezing themselves into such cardboard safe places.

Being in a box helps the cat feel more protected than being out in the open, especially when the next urge to nap comes along. Another reason for tucking oneself into a box is that is catches and reflects body heat, which cats love. If no boxes are available, your cat may try the next behavior instead.

9. Transforming Into A Cat Loaf

We all like to tuck our hands and feet under the covers when we are cold. Cats are not much different, they just tuck paws and tail–and sometimes noses–under “cover” of their own bodies.

A cat’s normal body temperature is somewhere from 100 and 102.5 degrees Fahrenheit, so the average wintertime household may not be comfortably warm to our kitties. Luckily, thanks to their lithe and flexible bodies, they can tuck all their extremities under them, leaving them looking a bit like a traditional American main dish.

10. Trying To Bury Their Food

If your cat doesn’t like his own main dish, he might just walk off in protest. Some cats, though, display an ineffective instinctual behavior–they try to bury the food.

In a less-tame environment than your home, a cat might want to cover the carcass of a dead animal it had killed to avoid attracting other predators to its own territory. Whatever the thought process, there is something in the smell of the food that sets off similar actions to covering feces in the cat litter box. But, in the average kitchen, there isn’t much organic material like soil or leaves to cover the “dead body.” So, the cat ends up looking like he is sweeping around the cat food bowl.

One of my males thinks he needs to “hide” the leftover food where I serve my kindle of cats on the dining room table. He scratches at the table cover until he manages to flip it over the bowl. Oh, well — that table cloth probably needed to be washed anyway!

We could not wrap up any discussion on odd cat behaviors without mentioning the midnight yowl. Whether your cat spends its nights in a home or in the wilderness of your neighborhood, most cats do some nocturnal hunting and prowling.

Cats are actually crepuscular, meaning they are most active at dawn and dusk. And after all that sleeping all day, they are probably up at least sometime during the night. We have to realize, too, is how a cat’s appetite affects its behavior. Cats hunt and consume relatively small prey. A “perfect” meal is about 30-40 calories – the size of a mouse or small bird. Unlike our canine friends who typically get one or two meals in most American households, cats need to eat several small meals around the clock.

One of the challenges to indoor cats is that their sleeping versus hunting/eating patterns may be quite different than their humans. As soon as we give in to the nighttime yowling of a cat with a portion of food delivered to buy us more sleep, the cat realizes the power it has in its early wake-up call service. Get yourself more rest by giving your kitties food puzzle toys or just hiding some cat treats or kibble around the home for felines to find.

If you notice sudden changes in nighttime vocalizations in a senior cat, though, it might be a reflection of cognitive changes going on. Remember that geriatric cats actually need to go to the veterinary office for check-ups more often than their younger counterparts. This is by no means an exhaustive list of odd behaviors.

Regardless of humans’ attempts to categorize them, there are delightful variances in each cat you will encounter. Some cats show a preference for drinking running water versus still water served from a bowl. There are cats who run from water and others who like to play in it. The human desire to label the behavior of our pets for easy pigeonholing will continue to evade us. As for this list, no matter whether they seem normal or strange to you, these are all typical domesticated cat behaviors. Embrace the felinity!