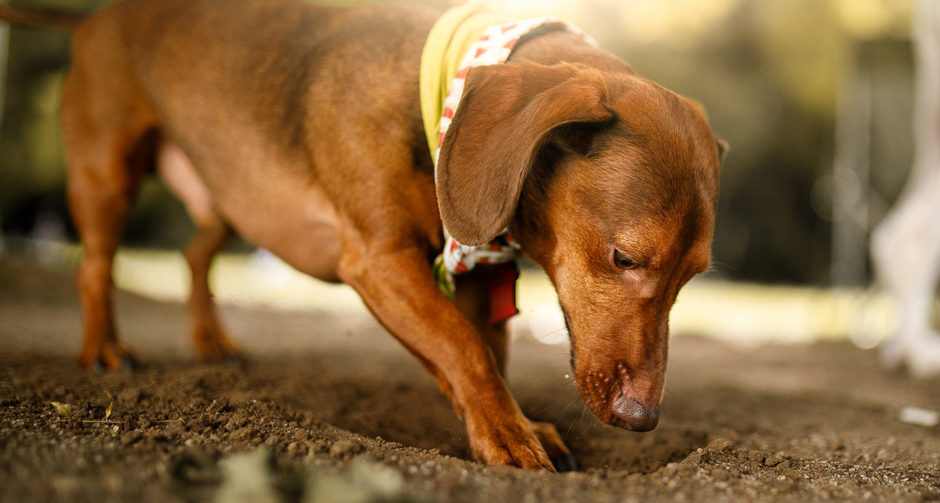 Few of us cheer when our dog digs up our garden. However, we should keep in mind that if a dog has digging genes, in many cases we humans developed that natural trait to serve our purposes. It’s not the dog’s fault our objectives have changed.

While all dog breeds have some instinct to dig and may scratch or dig at the floor, carpet or bed, as he looks for the perfect spot, there is no doubt that some dogs take their digging a little more seriously than others.

See which dog breeds are most likely to dig and find out why they do it.

Hound Group. The German-bred Dachshund used his short but dogged legs to burrow deep into the earth, creating tunnels through which he hunted badgers and other prey. Today, the breed still follows his nose and instincts; he’s likely to dig up flower beds in an attempt to excavate the rodents in his yard.

Terrier Group. The Bedlington is a natural hunter with a penchant for pursuing rodents and vermin. The Bedlington may resemble a lamb in appearance, but the similarities end there. Tough and persistent, the powerhouse Belington digs with vigor to reach rabbits or rats. More About Bedlingtons>>

Terrier Group. A small, active terrier native to Scotland’s Western Highlands, the Cairn was used in packs to control fur-bearing vermin. Like most terriers, Cairns tend to be diggers and are vigilant in their search for underground rodents. Did we mention the word terrier comes from Latin and means “earth dog?”

Hound Group. Like many scent hounds, Beagles will dig in the yard for in-ground prey, but they may also dig out of the yard to follow the scent of above-ground prey. Bred for generations to track, a Beagle will take on any digging project to accomplish his mission. Although bred in England’s temperate climate, the breed also sometimes digs to cool off. Or perhaps that’s a smokescreen. Maybe the merry Beagle digs when there’s a shortage of rabbits to chase and a corresponding shortage of fun.

Terrier Group. Bred in Germany working on farms and pursuing vermin, the Miniature Schnauzer still rids its home and property of rats and mice today. The Schnauzer’s drive to exterminate rodents may drive him into the ground. The resulting dirt and holes are the downside. On the upside, unwanted visitors won’t be able to set up housekeeping in the family’s residence for long.

Sporting Group. Though originally bred to be a tough hunter, the Wirehaired Pointing Griffon also may moonlight as a digger. His high energy level, drive to hunt, and desire for company make him an excellent sporting companion. In fact, he’s often called the “4-wheel drive of hunting dogs” because of his ability to excel on any kind of terrain: briars, underbrush, field, and water. With great talent, however, comes great responsibility (for the owner, at least!). If left without a task, the Griff may channel his 4-wheel drive skills into the ground.

Working group. Dogs bred in cold climates such as the Siberian Husky may dig for a warm, underground sleeping area during winter. But your garden isn’t safe in the springtime either; they also dig for cool spots when they’re hot. Their double coat offers insulation from both heat and cold, but who can blame them for supplementing what Mother Nature gave them.

The Malamute is a legendary freighting dog of polar expeditions, to keep warm in the snow, they often dig to burrow themselves into a warmer underground sleeping arrangement. While the Malamute has adapted well to warm climates, they prefer the winter months and keeping their temperature pleasant, so it’s not uncommon to see them digging into the earth on a hot summer day to stay cool.

They aren’t professionals, but that won’t stop them from trying.

Herding group. The Australian Shepherd wasn’t bred down under, but rather here in the United States. Nor was he bred specifically to dig. But he was bred to work all day alongside his owner. Developed to maintain high energy, an un-exercised Aussie may dig up gardens or under the fence in an effort to cultivate his own work and sense of fulfillment.